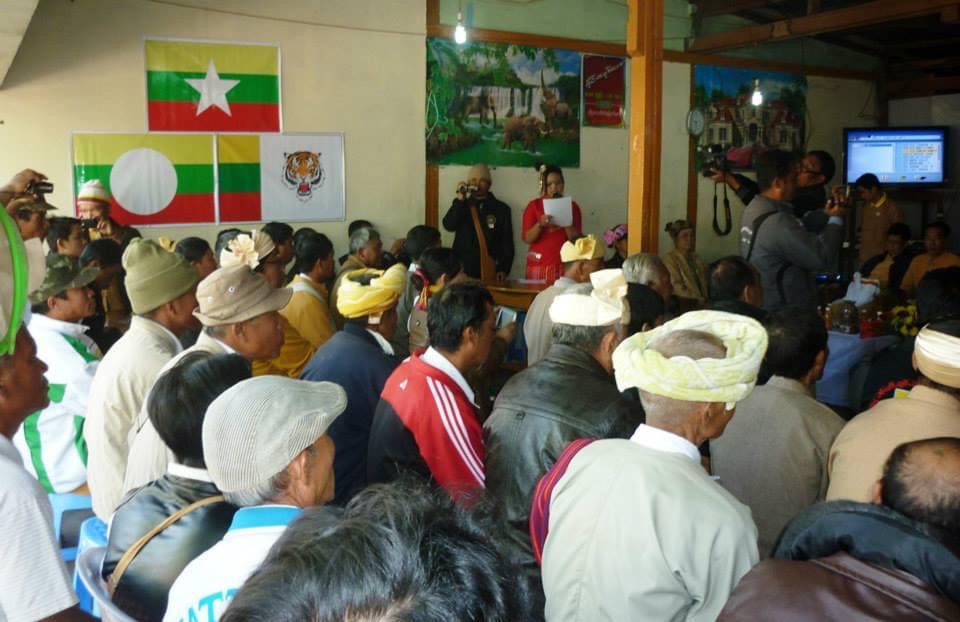 In Myanmar, the armed struggle by ethnic armed organizations (EAOs) against central regime has continued to be a mainstream political movement for non-Burmese ethnic peoples and such political movement always calls for the right of self-determination and equality among ethnic peoples. At the same time, current democratic transition in Myanmar has been undergone under 2008 constitution since 2011, which general Than Shwe, a former dictator of military junta, strategically laid out. As a consequence, in addition to the majority political parties such as National League for Democracy (NLD) and Union Solidarity and Development (USDP), many other political parties including non-Burmese ethnic political parties have burgeoned. 2010 election, the first ever turn of current transition, was held with the preemptive arrangement that ex-generals including general Thein Sein of USDP were able to grab the political power as a civilian regime, which had eventually rendered Thein Sein as a president. Consequently, Aung San Suu Kyi joined the by-election in 2012 after being positioning as an opposition leader for more than a decade and became an ordinary member of parliament during Thein Sein’s administration. In fact, not only did the majority Burmese trust Aung San Suu Kyi to change Myanmar into a genuine democratic union, but also non-Burmese ethnic peoples including most EAO leaders considered that she was the most capable of pushing Myanmar’s transition to move forwards.

By the time of 2015 election, NLD came up with an enthusiastic slogan, “time to change”, which Aung San Suu Kyi convincingly mesmerized the peoples including non-Burmese ethnic peoples across the country. As a result, NLD won the election by a landslide and was able to control the national parliament and form the national government. On the other hand, some creditable non-Burmese ethnic political parties, such as Shan Nationalities League for Democracy (SNLD) and Rakhine parties won a certain extent in Shan and Rakhine states. In Rakhine state, the Rakhine parties won most constituents for state level. However, the NLD failed to offer the appropriate positions of state and national governments for the winning members of SNLD. Most importantly, NLD ignored the role of winning representatives from Rakhine parties in Rakhine state, while forming state government and nominating the Chief Minister for the state government. The complaints have been publicly soared among non-Burmese ethnic peoples that the behavior of NLD has been considered as a centralized character with hegemonic strategy.

The three Kachin parties – the former members of UNA, namely the Kachin Democratic Party (KDP), the Kachin State Democracy Party (KSDP), and the Union and the Democracy of Kachin State (UDPKS), which was not a member of UNA, have merged into one Kachin party named the Kachin State People’s Party (KSPP). In fact, the Kachin National Congress (KNC), a member of UNA, was also engaged in the initial process of Kachin parties’ amalgamation. However, the KNC was left out from the fusion of Kachin parties due to the historical role of KNC party and other reasons. Most Kachins always publicly expose on Facebook and other social and political discussions that the KNC was adamant to collaborate among the Kachin parties, instead it holds the KNC first policy, to which all other Kachin parties have to join by dissolving their respective party. For 2020 election, the KSPP officially holds a status to run in the Kachin state and it identifies itself as a state party in Kachin state, whereas the KNC holds the status to run the whole country and identifies itself as a “Union Party (Pyidaungsu Party)”. The KNC has now been attempting to run across the country, particularly in both Kachin and Shan states for 2020 election. The scenario of KNC seems to be revealing a centralized character with hegemonic strategy.

On the other hand, SNLD has changed its party’s policies and the policies look convincingly smart and inspiring for the right of self-determination and equality in relation to Panglong promises. Moreover, SNLD party is one of the commendable non-Burmese political parties since U Khun Htun Oo, an opposition leader and a political prisoner for decades during military regime, has been taking the lead. With its new policies and strategy, the SNLD has appointed different non-Shan representatives including Kachin for 2020 election. Based on the KNC’s complaints, the maneuver of SNLD for 2020 election implies that it attempts to preemptively take a leverage over its influential role among non-Burmese political parties. For instance, just like NLD, the SNLD has picked up Maw Htun Aung, a Kachin representative who is very new to local Kachins since he is from Yangon, in order to run a constituent of Amyotha Hluttaw in the areas of Kutkai, Muse and Namhkam where a certain extent of Kachin has been populated and considered as part of the Kachin Sub-State areas by the local Kachins.

Given the historical facts of Kachin-Sub State, it was once recognized by Shan state government during 1950s when the Union of Burma was ruled with 1947 constitution, which was a democratic constitution. During that time, the local Kachin representatives namely Mr. Lashi Gam (1948-1952), Mr. Pungshwi Maran Zau La (1952-1958) and Mr. Luksing Zau Lat (1960-1962), all of whom were from northern Shan, were elected as ministers for the Kachin Sub-State. In terms of legitimacy, so far the Kachin Sub-State Assembly has already been active in the political issues for the Kachin peoples in northern Shan for years and it was informed that the Assembly also considers SNLD as a close political partner in struggling for the right of self-determination and equality for local ethnic peoples in the regions. It was reported that the Assembly sent an official letter to meet SNLD’s EC members in order to exchange the SNLD leaders’ perceptions over the political legitimacy of Kachin Sub-State and further apposite political collaborations, that was during the first wave of Covid-19 outbreak in Myanmar while public travel was still allowed. In addition, the second attempt was followed by the Kachin stakeholders from Kachin Sub-State Assembly, Kachin Literature and Culture (Shan State), Kachin Baptist Union (Shan State) and Kachin Youth Organization (Shan State) after holding an ad hoc meeting on 22 September, in which a committee composed of five members was formed to meet SNLD leaders. The committee was endorsed by five local represented Kachin organizations from northern Shan. As a consequence, the committee sent an official letter to SNLD for online meeting since the second wave of Covid-19 outbreak has been overwhelming. However, it was also informed that no official letter was received from SNLD and it seems that both attempts went in vain. Therefore, just like NLD, whether the behavior of SNLD is moving towards a centralized character with hegemonic strategy remain vigilant.

Current democratic transition under 2008 constitution is naïve and fragile despite the fact that the culture of party politics has come into existence. In fact, even NLD was not able to make a dramatic change for Myanmar’s democracy yet and the elephant is still in the room to spoil a genuine change. However, it is sad to see that a centralized character with hegemonic strategy seems to become common in both the majority Burmese-politicians-led and non-Burmese political parties. All these have to wait and see until the formation of a new national parliament and government as a result of 2020 election.

Kodawng Uma – Kodawng Uma is the pseudonym of the author based in northern Shan and he is an analyst of ethnic political movement for both Burmese and non-Burmese ethnic groups. He can be reached out at [email protected].