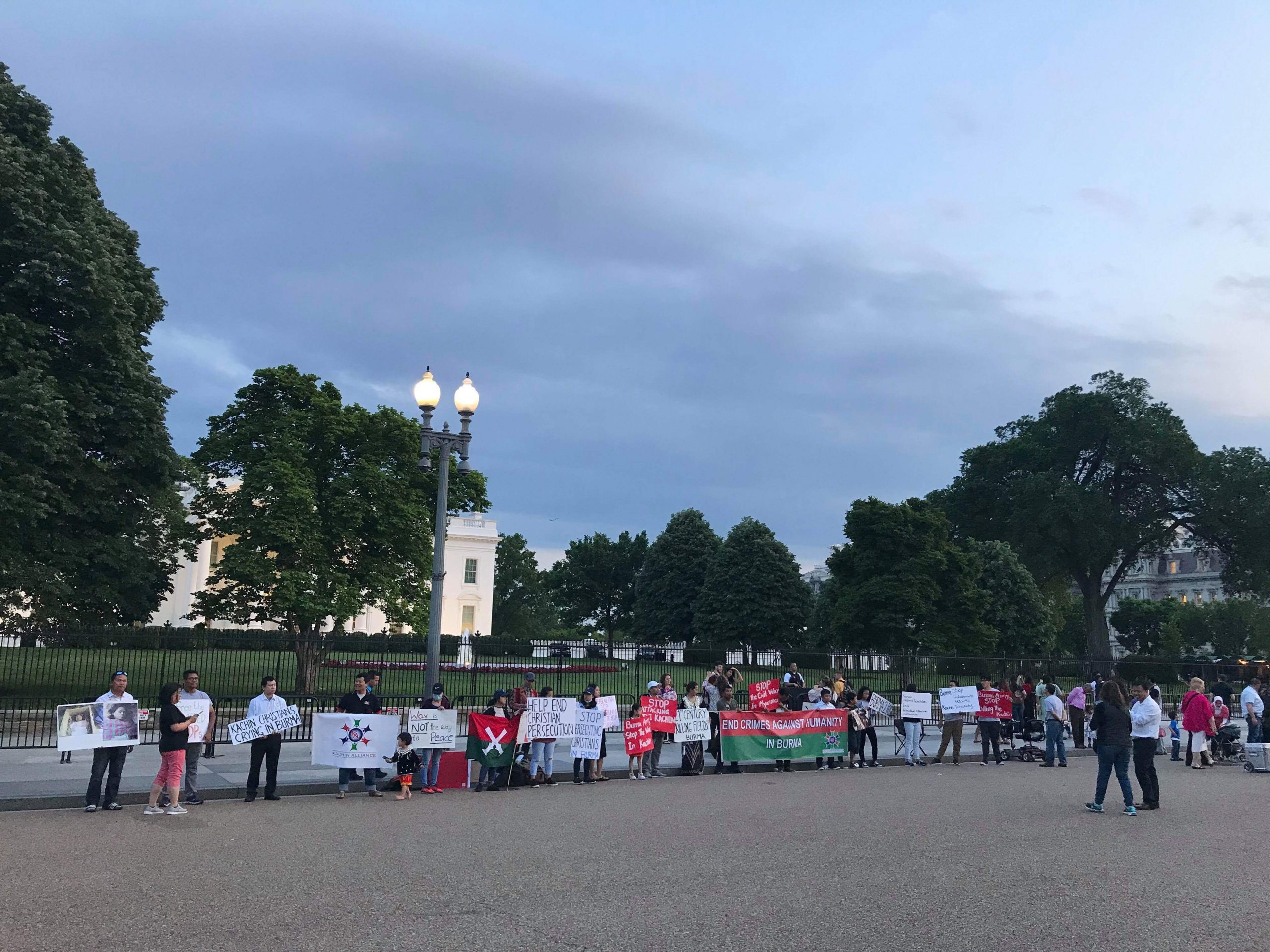 In a community rallying effort to rescue trapped IDPS within Kachin State, peaceful sit-in protests have been ongoing. These protests have mostly been led by Kachin Youth Movement in Burma’s northernmost state. In support of their efforts, the Kachin community in the USA is currently holding a 24 hour rally from May 11 at 3 pm to May 14 at 3 am, in front of the White House hoping to end persecution in Kachin region.

Below is an excerpt from KLN’s interview with Nsang Gum San, President of Kachin Alliance in the US that has planned the rally.

KLN: We have received news of several Kachin people participating in the rally in front of the White House today. Can you tell us approximately how many  people are participating?

GS: Well, members of the Kachin community from Florida, Pennsylvania,Tennessee, Maryland, Virginia and New York states have come to join us. Approximately up to 30 people have joined hands with us. Currently, there are 8 people remaining as it is nearing midnight.

KLN: Can you tell us what is the outcome you are hoping to achieve with this rally?

GS: Actually we have been fasting and praying while raising awareness of the issues facing trapped Kachin IDPs. As Christians, one of the most powerful acts you can perform is to fast, pray and be empowered. There are several factors we want to achieve from this rally:

– To show our solidarity with trapped Kachin IDPs and stop the persecution perpetrated by Bama troops.

– To raise awareness among ordinary American citizens of the war happening in Kachin region. Many people have heard or read about Burma’s persecution of Rohingya muslims but not the Kachin community, an obscure minority with majority Christian adherents.

– To garner support from ordinary citizens to push their lawmakers to impose sanctions on Burmese regime.

– For US government to urge UN to bring responsible Bama generals to the ICC.

KLN: So far, do you think the rallying and protesting has made an impact?

GS: Not everyone can just come here waving a sign in front of the White House. It has to be an urgent, serious matter to hold a rally here. We had to apply for the assembly permit months in advance. Many people seem interested and we have been explaining to them the reason we are here and the plight of the Kachin IDPs in the jungles and make-shift camps. We have been able to convey the message to some leaders of human rights groups and Christian organizations as well.

In his congressional record, senate majority leader, Mitch Mcconnell has mentioned about the Kachin’s integral part in Asian theatre during WW2. We have shared this historical fact with a group of students today.

In addition to interviewing Mr. Nsang Gum San, KLN also talked to Mr. Hpauda Tu, one of the participants staying up to the next morning.

KLN: It is already midnight in D.C and how’s the foot traffic there?

Tu: There are still lots of tourists visiting the landmark. In fact, more supporters have just arrived and we are nearly 20 now. I am live streaming our activity as well. In fact, several Rakhine and Chin supporters are to come early in the morning to join us.

KLN: What is the highlight of the rally up to this point?

Tu: Today not less than 60 high school students with more than 10 teachers chaperoning them requested us to tell them about the persecution of the Christian Kachin in Burma. We were very delighted young people are interested such matters and Mr.Nsang Gum San explained to them about the situation in details. Besides being able to talk to visitors about the Kachin struggle for freedom under oppressive Bama government, this, to me, was the highlight of the day.

KLN: Any message you want to pass to the leaders of Kachin Youth Movement?

Tu: In America and most places outside of Burma, people can hold a demonstration and not be beaten, jailed or killed. But I was born and bred there so I know how the Bama police and soldiers handle demonstrators. I am very proud of the youth leaders and the followers for your courage to stand up for what is right and just. Because of their courage and dedication, some trapped IDPs have been released by the Bama troops. You have shown the world that it was the Burmese troops who have trapped innocent Kachin civilians and their children in the jungle without allowing them access to any food or humanitarian aid.

KLN: Any word for Kachin outside of Burma?

Tu: Well, most of us outside of Burma enjoy the freedom of belief and choice in what we want. There are a handful of Kachin organizations such as Kachin Alliance and KNO promoting Kachin affairs at world stage. Although we are a very small population, we belong to many churches such as KBC, RC, AG etc. Political, church and community  leaders must do whatever they can to support the people back home. I wish to see more humility and respect from our community leaders so they can unite and set aside their differences to work together on our common goals.