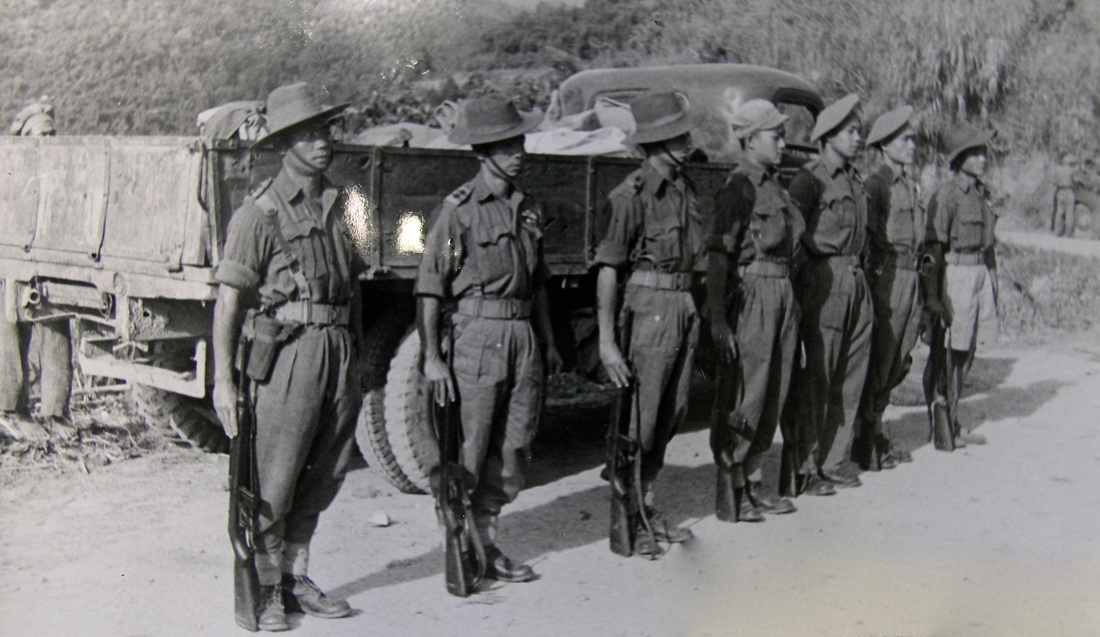 Laphai Naw Seng was born in northern Shan State’s Loi Kang village in Lashio township in 1920. His father Lahpai Naw was an accomplished hunter who was well known in the region. Since age 7, Naw Seng accompanied his father in numerous hunting trips and became a sharpshooter trained by his father. At age 15 in 1935, he joined the Union Military Police Academy in Lashio. Being an ambitious lad who wanted nothing but a brighter future, he not only studied military strategies but also Kachin and English literature as well. He was known to be small in stature but nimble, responsible and decisive. Being results-driven and trustworthy, the training officers expected him to become a strong military leader one day.

Naw Seng was married twice, first to Nai Roi from Pinsa village in Sumpra Bum while hiding away from the Imperial Japanese Army during WW II, and to Nding Roi (soldier) from Bang Jung village in Kut Hkai township. He had two sons and a daughter from the first wife while two sons and three daughters were born from the second wife. When coming of age, all his eight children actively participated in Kachin struggle for self-determination.

In 1941 December, led by Bo Aung San, 30 Burmese military leaders infiltrated into Burma bringing along the Japanese Imperial Army via Thailand while recruiting over 800 men on their way, subsequently founding the Burma Independence Army (BIA). The Japanese Imperial Army led by General Yamashita advanced into Burma splitting the forces into two main columns. Meanwhile, forces led by General Stilwell and General Chiang Kai-Shek entered Burma via China’s Yunan Province to face the Japanese. Lack of proper planning from the British forces had resulted in their terrible defeat by the Japanese forces. The doomed British forces were in disarray and deserted Rangoon on March 8 1942, later losing Lashio in April, and Bhamo and Myitkyina between May 9 – 10.

By August 1 1942, the Japanese Imperial Army had taken all major towns in Kachin region while the retreating English and Kuomintang troops fled to India by air and on foot. Some Kachin soldiers were also among those retreating to India; however, the larger part of Kachin forces remained hiding among the thick jungles where they continued harassing the Japanese. Those hiding along with Naw Seng included some Chin and Karen troops numbering approximately 2000. After capturing Bhamo and Myitkyina, the Japanese continued taking Kat Za, Mogawng, Ka Maing, Sadung, Sama, Law Hkawng, Htaw Gaw and Sumpra Bum under their control while establishing bases to oversee the newly conquered territories.

The Japanese committed many terrifying atrocities against Kachin civilians everywhere. As a result, Kachin soldiers wanted nothing but to liberate and rescue fellow Kachins from the brutal hand of the Japanese, and they fiercely attacked the enemy relying on guerrilla warfare tactics. Naw Seng mobilized soldiers who went into hiding in Law Hkawng, Namda Mai and Putao and began attacking Japanese troops as if they were hunting down wild animals.

It was a major war where one could see warplanes buzzing in the sky day and night. Sometimes warplanes attacked each other. Similarly on the ground, deafening heavy artillery shells shook the earth causing many people unable to fall asleep. Everyone from the villages had gone into hiding in the jungles. I also became uninterested in farming as it became impossible to focus on work. As luck would have it, I went to see Naw Seng after receiving news that he was in nearby Pin Sau village visiting his girlfriend.

With his approval and encouragement, I enlisted myself to Naw Seng’s resistance army on July 15 1942 sworn to fight off the Japanese. With other new recruits, I began my military training. Our first military instructor was also Naw Seng himself.

Although always short of supplies such as food and clothes, the “Let’s fight the Japanese!” (Japan gasat ga!) rallying cry had brought many Kachin to Naw Seng’s army to repel the enemy who were ransacking and destroying civilian properties while torturing, raping, killing fellow Kachins. The new recruits were already fighting the Japanese while still undergoing military training. New units were quickly formed as more people joined, Naw Seng and his army had simultaneously garnered unyielding support from locals and elders.

Meanwhile, the American, British, Indian and Chinese troops were planning their attack on the Japanese who had occupied Burma. In early July in 1942, some British and Kachin officers such as Nhpan Naw, Lazum Tang Ji, Npawt Yaw who had retreated to India earlier were parachuted back into Kachin hills to organize the natives into fighting forces.

The British officers said to us “Many more Kachins must join the resistance movement. We can create all-Kachin battalions if you can mobilize enough people. You shall create you own country after defeating the Japanese. Then you will transform into an army protecting your own country.” With that in mind, Kachin officers began recruiting vigorously and before long, the NKL was over 7,000 members strong. The Levies units were headed by Col. Fort and his subordinate Lt. Col. Gordon comprising of seven companies: company A, B, C, D, E, F, G. Each company was consisted of four platoons. Naw Seng was initially assigned to lead a platoon. Due to growing numbers, he soon assumed the leadership position for Company D. There were many difficulties as food supplies and uniforms were not provided for the new recruits. Only in mid 1943 the issues got resolved when the British cargo planes coming from India parachuted food supplies and uniforms.

By September 1942, all NKL companies had infiltrated behind the enemy lines. From Sumpra Bum to west of Irrawaddy river, from Mali and Nmai rivers to Htaw Gaw and Lauk Hkawng in the east, our forces split into two main columns. Since the outset of the campaign, Naw Seng led his forces fighting many major battles along the way without rest. He attacked the enemy forces swiftly winning every battle. In November 1942, I also assumed the leadership position of 4th platoon under Naw Seng’s company D. We had won some major battles and recaptured several areas formerly in Japanese hands.

In December 1942, taking a small unit with him, Naw Seng left for Myitkyina-Putao road, a transport route regularly used by the Japanese. He was racking his brains to come up with the most efficient ways to kill as many Japanese as possible in a single blow.

After reaching Nsawp village, he ordered the troops to extract two 30-40 feet long canes from the jungle and lay them along the roadside. The soldiers also dug small holes along the highway and collected slender but strong jungle vines as instructed. Some fellow soldiers had no slight idea what Naw Seng was up to. Others even said we were trapping wild boars. When news of Japanese approaching our way was confirmed, he ordered us to bury hand grenades in shallow holes we had dug. The hand grenades were then attached to the canes by the vines. When the Japanese arrived in the afternoon, the two soldiers assigned with the noble task detonated the hanging bombs.

The rest of us opened fire as the bombs exploded and we could see up close Japanese soldiers running amuck and getting slaughtered. We left the bodies of Japanese soldiers for the crows, vultures and foxes to clean up. However, for a period of 2-3 months, the road was filled with horrible stench from rotting bodies. All rejoiced and congratulated when news spread that Naw Seng’s ingenuity had killed many Japanese.

When the Japanese noticed our assaults were getting too strong to ignore, they gathered up their forces and launched all-out offensives using mortars, artillery, and fighters while their ground troops advanced to our positions in frenetic waves. Since then, all the hills and valleys in Kachin region were filled with the boisterous sounds of gun shots, mortars, artillery fire, and airplanes.

We fought 9-10 battles on average daily. We could not confirm how intense were the battles for Htaw Gaw – Mali river companies; however, one could hear the incessant thundering noises coming from rockets and mortars shaking the hills and valleys. Most of the fighting took place on the hills and plains simultaneously. During battles, Naw Seng was seen running around in lighting speed hopping from one position to another instructing his soldiers how to take aim, cut down the enemy from the left flank, hit targets without wasting the precious bullets, and take cover behind the small hill on the right and the like. In fact, we would all be hearing his incessant orders and instructions under a hail of fire.

In many instances, when he saw waves of Japanese advancing, he would promptly snag the machine gun from the nearby soldier and began cutting down the enemy himself. We fought and won many battles under his leadership, and soldiers who fought under Naw Seng had gained invaluable military tactics from him.

The Japanese were fearless soldiers. Following their captain’s order wielding a long sword, waves of soldiers would advance indiscriminately to our positions. Naw Seng and his soldiers could not keep track of how many Japanese they had mowed down. On our side, we had also suffered significant casualties.

Japanese fighters pounded our positions incessantly, while their ground troops constantly attacked us with artillery, mortars and smaller arms. We did not possess such powerful guns and our ammunition were running out. In February 1943, we began our gradual retreat.

With the Japanese closing in on us as we withdrew, for 10 days without sleep or time to cook meals hopping from one place to another, we made it from Nhkai Bum all the way to Sum Pyi Yang just before reaching Putao. After assessing the situation, we decided to not retreat beyond Sum Pyi Yang.

Reaching there, Du Kaba Naw Seng gave a short speech, “Although we are no match for their military might, we must continue engaging the enemy relying on our superior military prowess. Do not be discouraged, patriots. By carefully utilizing our weapons and ammunition, these weapons and bullets themselves will come to life while engaging the enemy. Use different strategies for different situations. It is extremely difficult to obtain victory at battles. But one must create such victories. Trust yourself and your commanding officers. With a strong determination like this, we will surely defeat the Japanese.”

The soldiers were extremely motivated by the speech and made up they mind to bring about the demise of the Japanese.

This article was translated by Myi Hprap from original article published by the Kachin Net.

The biography of Du Kaba Lahpai Naw Seng was originally written by Zinghang Tang, who fought numerous battles alongside Du Kaba. The Wunzup Rawt Jat Hpung, a Thailand-based Kachin organization, has edited the original story and published it for Kachin communities worldwide in hoping that Kachin people for generations will learn from the awe-inspiring life lived by a Kachin legend.

The sole purpose of this article is for Kachin people to thrive and elevate our status in many aspects and take pride in our own history knowing the great accomplishments of the past generations. It is widely believed that by learning one’s history and stories from generations before us, current and future generations are motivated to strive for betterment of their lives. Observing developed nations, one can conclude that political leaders and policymakers value and utilize the skill sets the youth possess while creating policies offering opportunities for them to grow and gain invaluable experiences. This action has led to the gradual development of the respective nations in the long run.

Du Kaba Lahpai Naw Seng was the first enlightened Kachin leader who understood Kachins had to take up arms and fight to obtain their birthrights and subsequently spearheaded the revolutionary war against U Nu Government relying on his unmatched war strategies. To study Du Kaba’s war strategies from all angles and also to honor Zinghang Tang, who wrote the biography of Du Kaba out of admiration and respect and based on his personal experiences , the Wunzup Raw Jat Hpung has published this short biography.