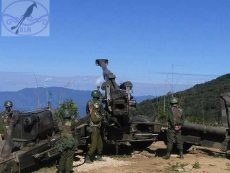 Two ordinary Kachin civilians were randomly summoned and severely beaten by Burmese Army (BA) soldiers last week. Lashi Seng Li of Nawng Mi village was on his way to get firewood in the forest when he was arrested, beaten, and stabbed by BA soldiers near Nawng Mi village in Hpakant township on March 14. BA […]