Burmese Army stationed near Hpakant began firing artillery into a nearby town Seng Tawng on May 31 at around 7 pm. The government army’s Monywa-based 16th LIR soldiers targeted Seng Tawng’s prayer mountain where landmark jade cross is located, a local Baptist Church and a Chinese Temple, said a local source. Artillery shells fell on […] 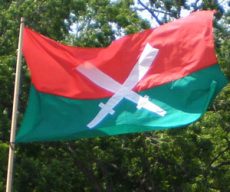 Since the June 9th of 2011, in the midst of the so-called Burmese political ethos of “reform,” the Kachin Independence Army has increasingly engaged in arm conflicts with the Burmese military. Over 75,000 refugees are fleeing from their homes to escape from the brutality of the Burmese soldiers. Even after almost a year of escalating […]

On May 18, Burmese army soldiers of 320th LIR under MOC-21, who are currently stationed at Tapaing bridge on Bahmo-Laiza road, asked passenger cars crossing on the bridge whether there is any Kachin inside the car. The soldiers said Kachin women should be raped and all Kachin men should be killed because they think Kachin […]