The Kachin Alliance, representatives of the Kachin community in the US, send a letter to President Obama on November 15, 2012. The letter was endorsed by 22 Kachin communities in United States and 15 other Kachin organizations and communities around the world. The letter said visiting the country at this juncture might provide legitimacy to a […]

Additional Burmese government troops have been deployed in Kachin areas contrary to President Thein Sein and his ministers’ claim that Burmese army is fighting a defensive war in Kachin and northern Shan state.  About 1000 Burmese soldiers were transported from lower Burma to Myitkyina after the two sides met in border city Ruili on Oct […]

Hpaugyi Htu San, a mother of four, was gang-raped by Burmese army soldiers from Chauk-based 13th L.I.B led by Major Kyaw Moe Aung on Nov 1. Government soldiers raped  Htu San at her own home  in Hkaqsan village, located on Kamaing-Mogaung road. 13th L.I.B is an Infantry Battalion under infamous Magyway-based 88th L.I.D which is […] 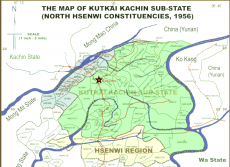