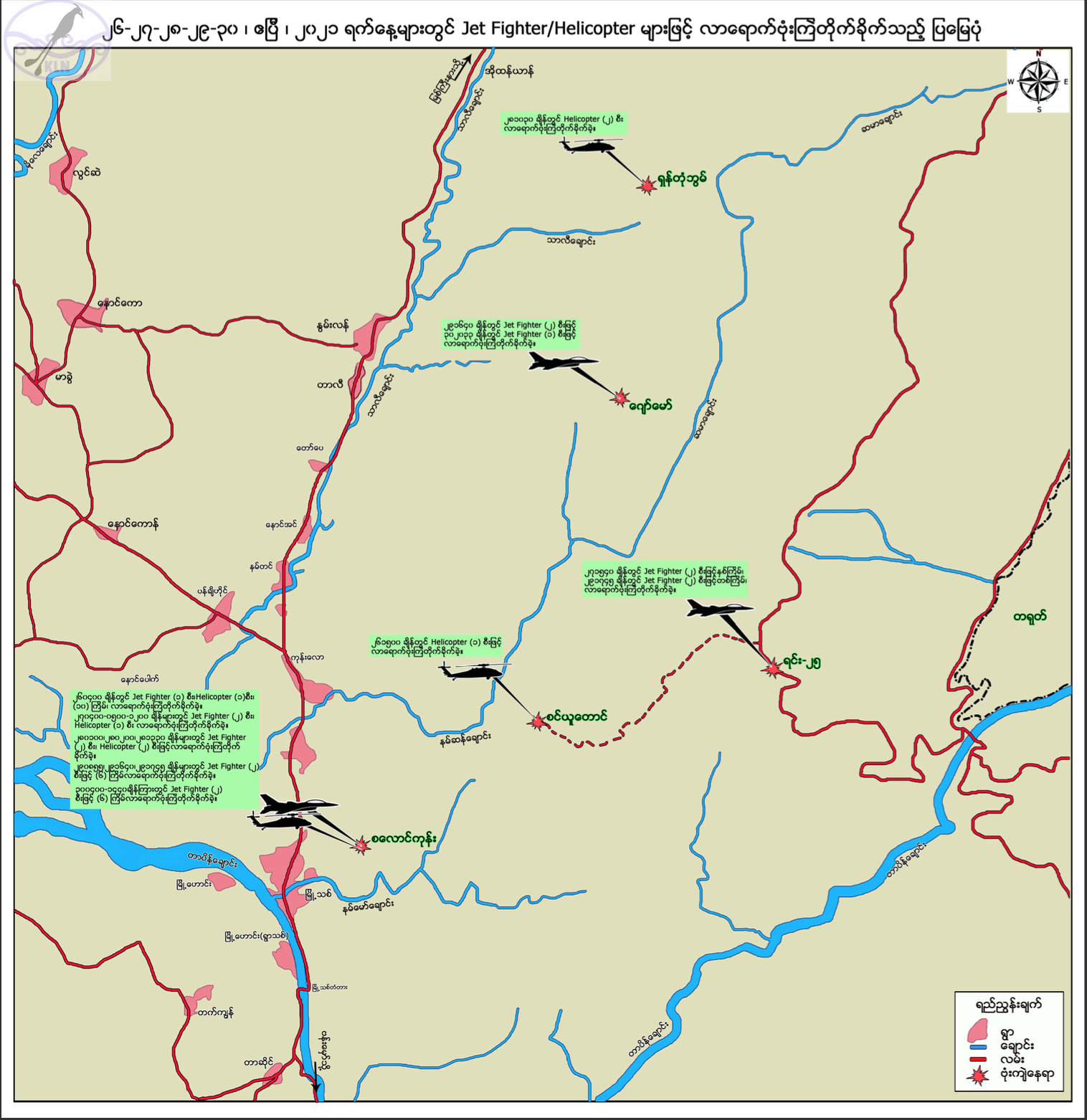 Fighting resumed between Kachin Independence Army (KIA) and BA (Burma Army) on March 11, 2021 in Kachin State after Kachin Independence Organization (KIO) issued a statement on Feb 17 calling State Administration Council (SAC), the name given by Burma Army’s coup leaders to themselves, to refrain from firing at protesters, and KIO’s spokesperson warning that it will intervene to stop shooting and killing.

Since then, SAC’s fighter jets and attack helicopters conducted a total of 131 airstrikes against KIA’s positions and civilians’ properties to date, according to data KLN received from KIA’s war office.

Photo: SAC’s airstrikes on May 7

There were instances that not only KIA positions were targeted but also civilian homes by SAC’s fighter jets. On May 5, a SAC’s fighter jet dropped bombs on Dawe village in Myo Hla township at 1 pm.  The air strike hit front and side yards of a home in the village, almost killing civilians living inside their own home. SAC’s airstrikes on Salawng Kawng and its surrounding area reportedly injured a Sihat villager.

Photo: A civilian home hit by SAC’s airstrike on May 7

A total of 17 airstrikes have been targeted on Alaw Bum since the first air attack against Alaw Bum began on March 11.

Local Kachin residents from China side even reported that they saw SAC fighter jets crossed over China side of the border to attack KIA positions around Alaw Bum.

SAC’s Air Force carried out over two weeks of daily air attacks against KIA positions around Salawng Kawng since April 24. A total of 63 airstrikes have been targeted on Salawng Kawng to date.

KIA troops shot down an attack helicopter reported to be a Russian-made MI-24V at Salawng Kawng on May 3.

Air campaign against KIA troops in Alaw Bum and its surrounding area will likely continue in the coming days as there is no serious intervention from neighboring countries and international bodies to stop SAC’s air attacks against its own people in Burma,