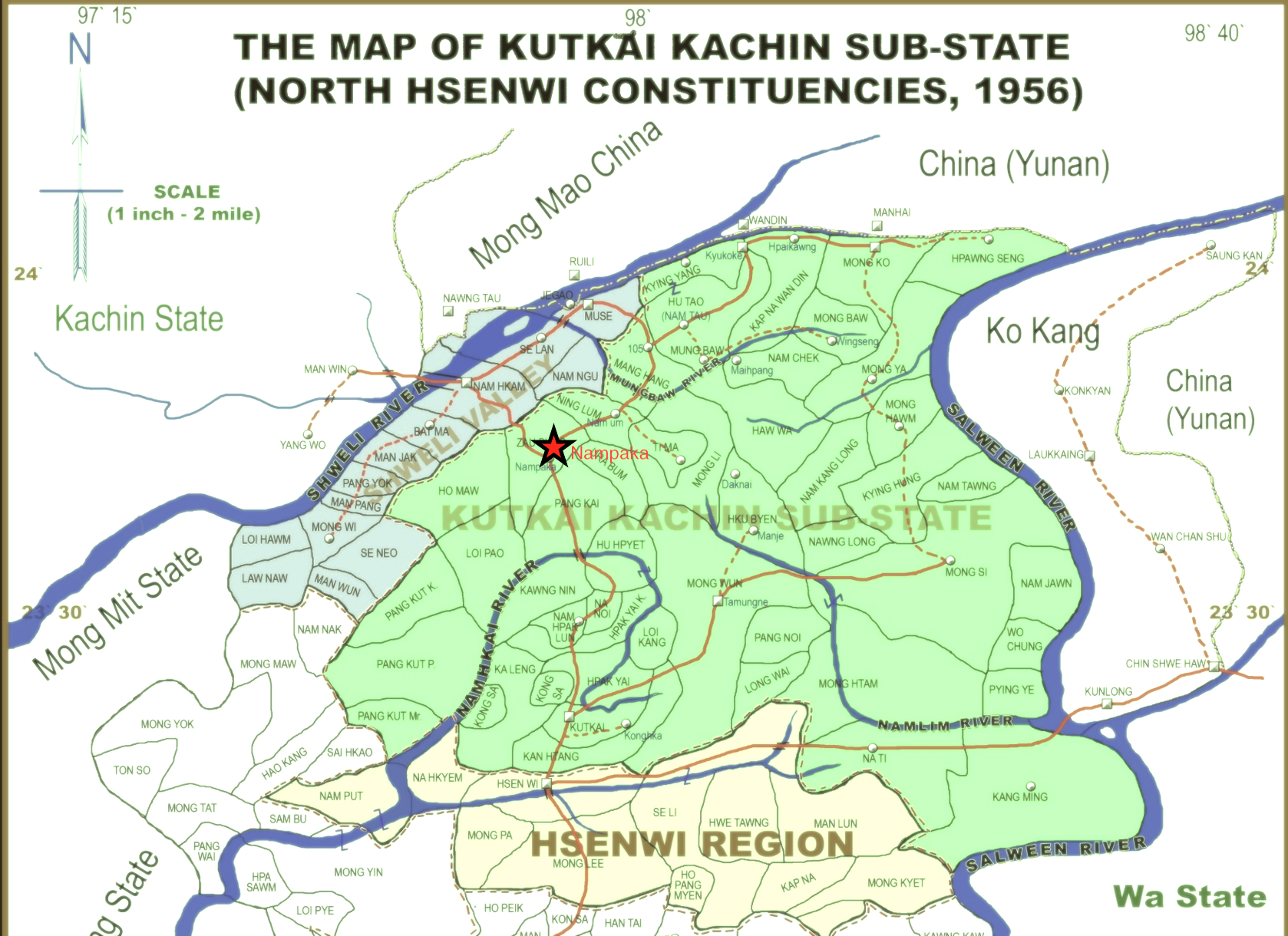 The Nampaka Resolution is a formal statement expressing the ideals envisioned for an independent federal Union of Burma by the Kachins. The resolution was reached on February 1, 1947, by Kachin delegates on their way to the historic Panglong Conference at the village of Nampaka in northern Shan States.

Prior to the Nampaka meeting, the Kachin District Council had met at the Myitkyina District Office on January 25, 1947. The meeting, convened under the auspices of the Frontier Areas Administration Commissioner, was tasked to choose 12 Kachin delegates – 8 from Myitkyina District and 4 from Bhamo District – to represent the Kachins at the Panglong Conference. The Kachin leaders were counselled to select the delegates carefully as they would shape the future of the Kachins and the country as a whole.

A meeting was thus held among delegates from Myitkyina and Bhamo, as well as leaders from the Kachin Sub-State town of Kutkai, on February 1, 1947, at Nampaka. The delegates finally reached a consensus, and a 9-point resolution was adopted with regard to the formation of a new federal Union.

Following is the full text of the resolution, a foundation for Kachin participation in the Panglong Conference and the Union of Burma, duly adopted and signed by the Kachin delegates.

Unanimous decisions of the Party or Group of Kachin Peoples’ Representatives.

1. Kachins to obtain Independence along with the Burmese.

2. To establish a Kachin National State, in accordance with the clear wishes of all the Kachin Nationals to form an Independent Separate Kachin State.

3. The Kachin Independent State should comprise the Bhamo and Myitkyina Districts, Kachin Hill Areas and the plains area to the north of Katha Town, including the areas in the plains.

4. With a system acceptable to both the Burmese and Kachins, the boundaries of the above-mentioned Separate Kachin State should be demarcated immediately.

5. To enable the Kachin people to obtain at once the present Rights and Privileges received by the Burmese now and to take over the Kachin Administration, Rights and Powers from the hands of His Excellency the Governor after the demarcation of the boundaries have been completed, the present Interim Government of Burma should have a Kachin Minister, unanimously elected by the Kachin Nationals or to have one by other means.

(a) The said Kachin Minister shall act as the Minister for Home Affairs of the Separate Kachin State.

(b) He shall take part in the affairs concerning Foreign (Relation) and Finance.

(c) To appoint a Kachin as adviser to the Minister in the Defence Department.

6. The Separate Kachin State as well as the Separate Shan State to participate at once in the Constituent Assembly, to which all the indigenous races of Burma could join, for the immediate attainment of Independence of the whole of Burma.

7. When all the indigenous races of Burma become independent by means of the above-mentioned method, an Independent Federal Government of Burma including the Independent Separate Kachin State shall be formed.

(a) Whether or not the Separate Kachin State should join the said Federation shall be decided only by the people from that Separate State.

(b) After the formation of Federation, the Kachins shall have the right to secede from the said Federation at their will and pleasure without any obstruction if they so desire.

8. The Central Government of Burma shall give such financial aid as required for the Rehabilitation and development of the Kachin State.

9. It is aimed to get also the consent of all other peoples of Frontier Areas to the above unanimous decisions of the Kachin Nationals.