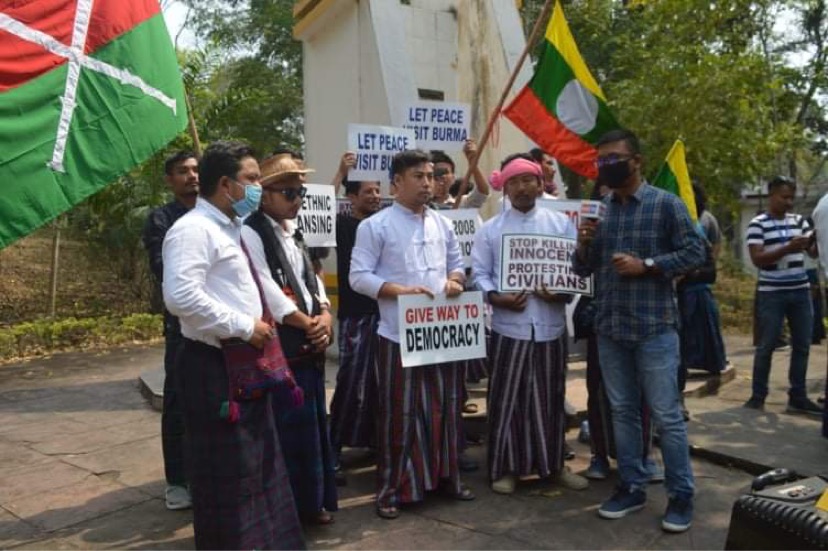 Peaceful protest and demonstration today (March 20th) by The Singphos & Tai Khamtis, The Tangsas, The Yobins (Lisu) in front of World War II Cemetary in Changlang district of Arunachal Pradesh in India to express their solidarity with the Kachins, Nagas, Nepalese and Tai Khamtis of Myanmar has conveyed that these communities though separated by international boundaries, carries the same bloodlines and they full heartedly support our struggle against Tatmadaw to restore democracy.

Till now more than 500 people from Myanmar have taken refuge by crossing the Indian borders to evade persecution at the hands of Tatmadaw and reason is we burmese still believe firmly that Indians are benevolent and feel and realise the pain and it is the impact of Dhamma.

India too have domestic compulsions and bilateral issues being an immediate neighbour but India has special concern about the situation in Myanmar and holds a view that dialogue and communication should be continued till it get normalised.

India’s emphasis is basically on middle path as being a biggest democracy they know severe sanctions may not be effective and moreover it will effect the common man who is already in distress. The sanctions will ultimately push us more closer to China, the director of the entire show!

The recent statements by Singhpo Development Society(SDS), All Tai-Khamti Singpho Students’ Union, Naga Students’ Federation and Gorkha Youth and candle light protest in Dimapur last week shows that people in India are concerned about Myanmar and they support their struggle and have solidarity with us as we are passing through a rough patch.

Since the time immemorial Singphos and Tai Khamtis maintained relationships with us despite separated by international boundaries. Shillong still remains one of the favourite destination for education for Kachins and Shans as it provides the similar climate and food.

The most important factor which binds the Kachins and Shans with North East India is mongoloid features and fooding habits and it’s the reason when we the ethnics visits India we get assimilated easily. Geographically, Kachin acts as a buffer for India against China.

During late 90s and early 20s, the pro democracy activists from Myanmar had chosen India as second home since the cultural, social structure and religion are common. Buddhism has cemented the relationship between two nations further.

Today if some one visits Arunachal Pradesh’s Namsai district the architecture of Buddhist Monasteries are similar to what we find in Myanmar rather to Mahayana structures in mainland India on the other hand we find Tayo architecture in buildings and temples in our own country. How shameful it is? This is called “Cultural Invasion” which came with Chinese economy and we failed then to evaluate the traps and the consequences. Reversal is not that easy nor impossible as well, we need to bargain!

I express my deep gratitude to North East community of India and the nature of concern they have shown towards us in difficult time we are in.

I personally feel that the momentum of CDM has gone down due to obvious reasons but I appeal to all that they should understand that is an internal power conflict and we alone can bring it to the concluding end rather to wait and expect from international community to intervene or fight our battle! This will strengthen our resistance!

KIA’s 14th Battalion troops launched an attack on a combine force of SAC’s 74th LIB and 318th LIR troops at Nam Hkam village’s jetty in Danai township on April 15 at 6:07 am. During the battle, SAC troops based at Noi Je Bum and Lapu Hka assisted its troops by firing several 81 mm mortar […]

SAC’s fighter jets continue bombing on Alaw Bum and its surrounding area on April 13. A fighter jet drops bombs on Alaw Bum at 4:48 am and two fighter jets bomb and attack with missiles on KIA positions around Alaw Bum in Momauk township at 11:53 am. Hka Ya Bum-based SAC troops fired an 81 […]