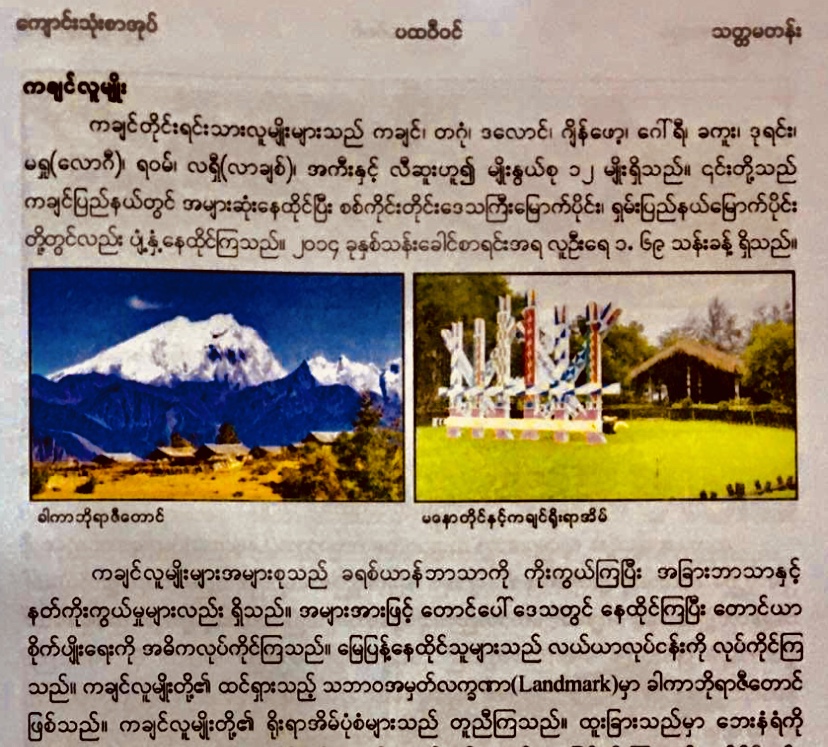 Photo: The 2020/21 prescribed Geography text book for the Seventh Standard

U Pan Yee’s Kyunnoke Doh Taingpyi (Our Country) was the school text book on Geography that raised the ire of Kachins far and wide for its demeaning portrayal of the Kachin and Chin as hill tribes people who resort to thievery to escape starvation. Acting at the behest of his constituents, Kachin leader Duwa Zan Hta Sin raised the matter in Parliament in September of 1959. This resulted in a Cabinet decision to withdraw the book, taught in schools since 1922, from the school curriculum. It was sweet victory for the Kachins.

More than 60 years have passed. Yet again, Kachins are having to defend the integrity of their ethnic identity in a classroom setting. The focus of their protest, again a Geography text book, is part of the 2020/21 syllabus prescribed for the Seventh Standard. The section on “Kachin People” contains errors pertaining to the makeup of the Kachin as an ethnic group, and the transcription of Kachin subtribe names into Burmese. These are errors that are egregious yet basic enough to be easily avoided with the most cursory of research, or consultation with Kachin cultural groups.

The book lists the number of Kachin subgroups as 12, a doubling of the number agreed to and accepted by all Kachin groups, and recognized officially in 1955. Failure to take into consideration clan or family and linguistic divisions in subgroup classification apparently led to the inflated number. For instance, “Jinghpaw”, “Gauri” and “Hkahku” are listed as 3 separate subgroups when in actual fact, “Gauri” and “Hkahku” are mutually intelligible regional dialects of “Jinghpaw”, with all three having a commonality in clan structure. Moreover, “Kachin” is classified as a subgroup even though it is simply an umbrella term used by non-Kachins to refer to the Kachin as a racial group. No such term or subgroup exists in Kachin. In previous times, “Jinghpaw” was the term used by Kachins to refer to themselves collectively as an ethnic group, but being that it is also the name of the dominant group, it has been decided to adopt a more inclusive term, “Wunpawng”.

A lack of knowledge or inquiry into how the Kachin subgroup names are pronounced resulted in a distorted version of the names when transcribed in Burmese, making some of them unrecognizable even to an ethnic Kachin ear. Also, the book’s depiction of the Kachin as primarily agricultural disregards strides made by Kachins in many other fields. It is this kind of racial stereotyping that makes an ethnic minority group like the Kachin vulnerable to situations of denigration by other racial groups. It was not that long ago, the 1980s in fact, that a Kachin law student at Rangoon University was asked by her classmates: “Is it true that you Kachins are cannibals?”

The mischaracterization of Kachin identity is not a recent issue. Kachin groups say it all began in 1982 when the then military regime made an arbitrary ruling on the number of indigenous races in the country. Since the regime’s new figure of 135 ethnic races was based on an inflated number of subgroups, Kachin cultural groups made several representations to subsequent military governments for correction of the number, but to no avail. Similarly, various political and cultural groups such as the Kachin National Consultative Assembly and the Kachin National Association of Tradition and Culture (Myanmar) have protested against the proposed geography textbook’s distortion of Kachin ethnic identity by issuing public statements and making appeals to the highest authorities of the land for remedial action.

The Kachins are raising their voices over the matter as it has serious ramifications on their identity and rights and privileges as a major indigenous ethnic race, a co-founder of the Union, no less. They fear that artificially splintering Kachin subgroups to inflate their number will lead to skewed census data, affecting political representation, budget allocation, etc. Moreover, it has the potential of provoking inter as well as intra racial conflict in an already tense multi-ethnic landscape.

The ruling Bamar majority should be mindful of how similar politicization of the school syllabus during British colonial times adversely affected them as a people, when history and geography text books as a rule exalt the British empire and belittle the culture and history of the native Bamars. It should be realized that a similar scenario is being played out presently at the expense of the Kachin.

The Ethnic Affairs Committee of the Kachin State Parliament convened a meeting with various concerned departments on July 15 to discuss the matter. A resolution was arrived at, which calls for the correction of the misspelled Kachin subgroup names in Burmese, and to adopt as official, the 1955 Presidential decree which states that the Kachin is an ethnic race made up of 6 subgroups. The Committee will seek confirmation of the resolution in the State Parliament and forward it to the Union Parliament for discussion and confirmation.

A hopeful note is for history to repeat itself – for a Parliamentary outcome that will again favor the Kachin cause as in 1959.

Do you have the same articles in English and Kachin? My father in law is Kachin and I want to learn to read and write so I can communicate with him from where I live.

Hi William,
Thank you for your interests for our articles. Unfortunately, we do not have the same articles in both English and Kachin except some news pieces.
Best,
KLN Team