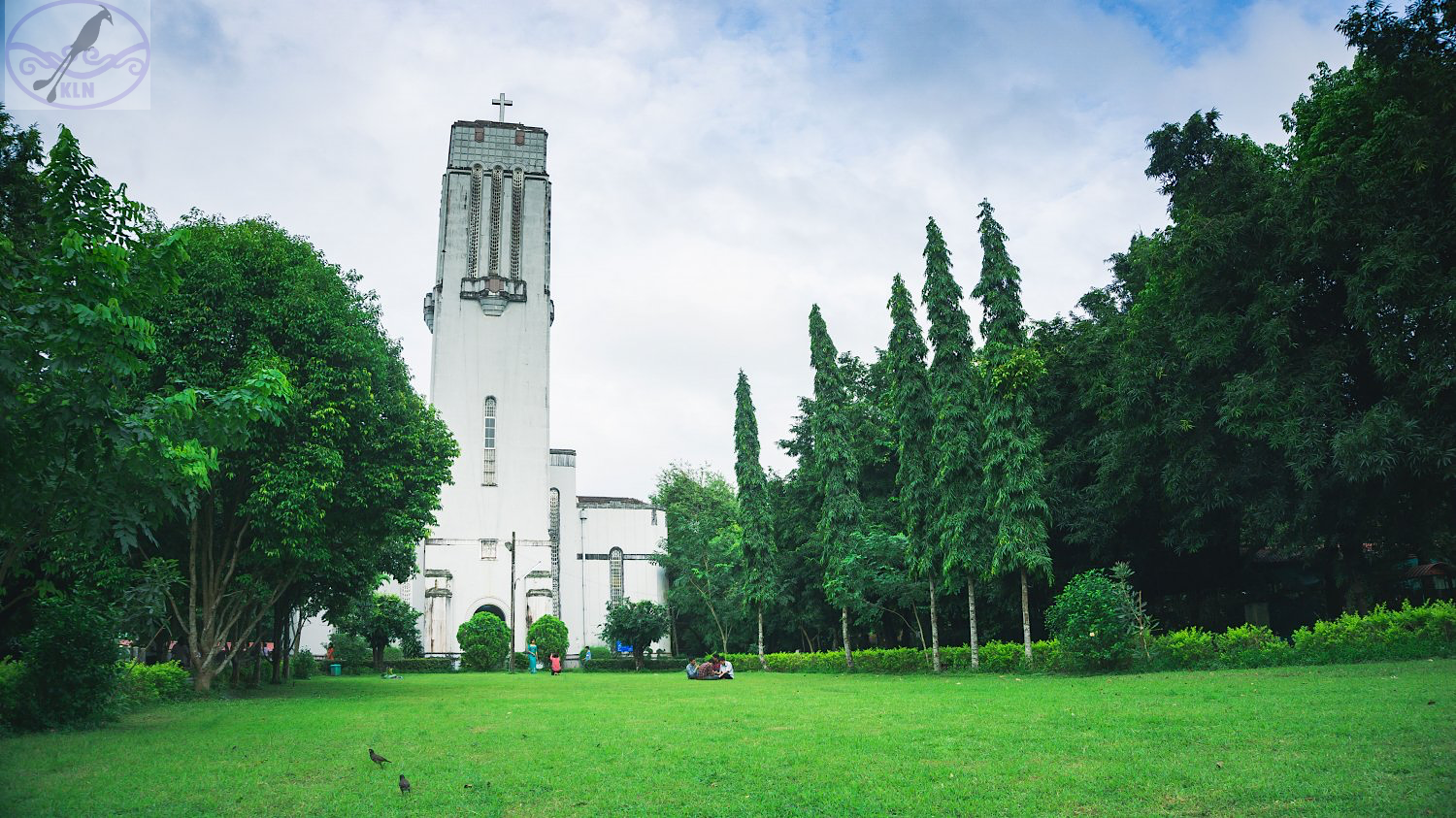 Liveth there a Judsonian with a soul so dead,
Who never to himself hath said,
This is my own, my Alma Mater.

It was the first morning of the first week of June 1929, the official opening day of the new term at Judson College. Approximately 800 students were gathered at the assembly hall of the college. While we freshers looked around with admiring eyes at the seniors who all appeared so mature and learned, Vice President-cum-Professor S.H. Rickard of the English Department led a short devotional followed by a solemn pronouncement, perhaps for the benefit of us freshers, that the College motto – The Truth Shall Make You Free – would ever remain the symbol, nay the watchword of the College.

This pronouncement did not evoke much interest in us freshers. Nor did we fully understand its connotation. Come two consecutive Sunday vesper services, Principal Dr. St. John, in quiet but dignified tones again preached the same theme from the podium of the old church, quoting John 8:30, “And ye shall know the truth, and the truth shall make you free.” Again, at the inaugural service of the new Judson Chapel the next academic year, Dr. St. John preached with all solemnity, the same theme from the new lectern. Very much the callow youth I was, it did no strike any deep spiritual chord within me.

Yes, those events were some fifty years ago, but I can still vividly see the glint in Dr. St. John’s eyes showing special interest whenever he talked to us freshers. We saw him always at the site of the chapel under construction, issuing orders to the contractor in charge. In fact, the lovely chapel with its very tall tower, overlooking the whole of the then University campus, was built under his meticulous watch. The grounds of Judson College, its lecture rooms, dining halls, hostels, staff quarters, were also said to have been built according to his thoughtful blueprints.

Fifty years seem to be a long time ago, but we old Judsonians do retain a wistful longing for our alma mater. Although I do not now have a list of all the professors and teaching staff, I still recollect with considerable affection those of whom I came to associate with for the period of 1929-1935. To facilitate easy recollection, I shall mention the names of my old Sayas (professors) – benefactors to be exact – by the departments in which they served.

Judson College was strong in arts subjects such as Philosophy, History and English. We had Dr. St. John taking up metaphysics, expounding the theories of Kant and Freud. Prof. Jury, introducing Logic to the Junior I.A. (Intermediate Arts) class with this thought provoking statement – All sound syllogism must have a proper premise and conclusion. Further illustrating:

No wonder such pithy introductions of the subject drew large numbers to the Philosophy Department. Dr. Hla Bu, with his patient counsel, and Mr. Kerr helping in tutorials, the department was very popular.

Next, the English Department with a strong and capable staff, namely Professor-cum-Dean Rickard as Head of Department, Lecturers Miss Helen K. Hunt, Saya Johnson Kangyi, Miss Eleanor San Tay, and many others helping in lectures and tutorials.

​The Science departments, although alien to me, did have well-known figures. We often saw Dr. Gates, “Worms Saya”, with his goatee, as he and his devoted assistant Saw Tha Myintof the Zoology Department, going hunting for new species of worms every weekend. Then we had Prof. Dickason with his Rover Scouts led by the very active Willy Tin Tun, planting trees in the campus on weekends – Arbor Day or not. Mrs. Dickason ran the archery class for lady students at the strips of football fields in the evenings. And yes, run she often had to, between the target and starting point, to ward off quite a few male students who ostensibly were there to learn the art, but had eyes more ardently glued to their own “bullseyes”, the lovely student archers.

When I look back now to those four and a half years of college, I cannot but have a profound sense of longing for those happy halcyon days. Free for the first time from the strictures of boarding school life, and free now to take one’s own choice in subjects to study. Free also to roam about campus, gathering in groups at John the Chinaman’s tuck shop, and scheming to bunk classes to go to the cinema. While sitting at the tuck shop, we would ogle at the co-eds in their different sadons (top knots) passing along the corridors, or listening to the prattle of inimitable Teddy Tin Thein, regaling us with his ‘leg-pull’ jokes at the expense of up-country tawtha (hill billy) students.

Then during football season, we would play robust inter-class football matches at our two trim fields, or join others going to the B.A.A. grounds (now Aung San Stadium) in our college buses to cheer our first eleven playing the semi-final match against the City Police Team in the Second Division League. We would join our Saya Johnson Kangyi, also the goal keeper of the team, when he led in a lusty singing of “Comrades of our Judson Team …” in his deep baritone voice. Come winter months, we would be playing tennis at the men’s courts or at the 2 ladies’ courts at Benton Hall (now Thiri Hall) in mixed doubles, and to have pleasant chats after games. I now remember Saya Kangyi teaching me the technique for serving aces, although he was rather weak at his backhand and half-court plays. Thanks to him, with improved serving, I became College Champion 2 years running.

We had considerable freedom in our hostels as most of the rooms were single. The Hall Wardens were there doing their rounds to check lights out, but only after 11:30 pm. Then there was the central dining hall for both Wellington and North Halls, where we learnt table manners. Table banging, spoon rattling and loud clamours for second helpings were not permitted. Nor was the wearing of singlets, even during afternoon tiffin times. The noise along the corridors to the dining hall was usually subdued, as at each meal, the bachelor members of staff would already be seated in front at 2 long white-sheeted tables. At dinners, Doctors Aspinall and Greenwood were invariably resplendent in their dinner suits and bow ties, typical Englishmen that they were.

​On Sunday evenings, we gathered around at the residences of staff members for combined worship service, where we could always expect coffee and snacks such as doughnuts, American style, followed by social games. Yes, occasions for mixed social games were the highlight of student gatherings at Judson. Teddy Tin Thein could still recount with relish, many ‘inside stories’, and funny mishaps that took place at these functions.

However, college life was not all fun and games. Apart from junior years, serious academic pursuits were expected of all when we reach Intermediate and Bachelor classes. Perhaps it would not be out of place to mention some outstanding honours students who were my contemporaries: Rama Murti (Pali), U Mya Tin, Merrs. Hamid and M.I. Khan (Economics), Jack Hlaand U Ba Chit (Philosophy). And then at the English Department, the not-too-slender Miss Von Bock, who would turn around and stare icily at us if we made any incorrect pronunciation, the De Souza sisters, Stella and Sylvia, and John Moonie. There were also Jock Carrot, Willy Tin Tun, U San Maung (History) and U Aung Din (Philosophy).

A word about alumni who have served the country with distinction. The late U Htun Myat and U Lahpai Khun Nawng, who served on the Council of State, U Aung Din, for a long time Regional Director with FAO at Rome, now retired at Florida. Willy Tin Tun, currently a high UN official at Seychelles, and U San Maung, the current Chairman of the Council of People’s Inspectors. There may be other alumni who had, or are rendering outstanding public service. I have on these pages confined my reminiscences to the period from 1929-1935. We should not, however, forget that Judson has produced a President of the Union of Burma, and quite a number of Honourable Ministers of government.

Alas, fifty years ago, seem just like yesterday. But where are those professors, my mentors today? I still remember meeting again Drs. Jury, Andrus and Hendershot at Washington, DC, in 1954. What a happy reunion that was! Again, where are my college mates, some very close friends, today? Some are still with us, but many are no more. I feel nostalgic and somehow sad to think of it all.

Yet again, where are those lush green playing fields, tennis courts, spacious lawns, hostels, lecture halls, and staff residences interspersed with trim hedges? No doubt, these had suffered at the cruel hands of the war years. Much more so, the whole landscape of the university had of necessity undergone considerable changes immediately after the war, bringing in numerous new buildings to accommodate an ever increasing university student population.

Duwa Lahpai Shan Lone (OBE, MC; MahaThray Sithu; Naing–ngant Gonyi Class I) was the second Kachin after his elder brother Col. Lahpai Khun Nawng to receive a university degree. A highly decorated war hero of the WWII era (known affectionately as “Rusty” by his British comrades), he was also recognized for outstanding services rendered during thehistoric Panglong Conference that led to Burma’s independence, and in the formation of the Shan and Kachin State ministries after independence. He served as Secretary of the Kachin State Ministry until the time of the military coup in 1962. Thereafter, he served as Commissioner of Kachin State, Magwe Division, and Director-General of the CensusDepartment before retiring from government service. He passed away on September 21, 2000, at the age of 90, while living with his youngest daughter in South San Francisco.