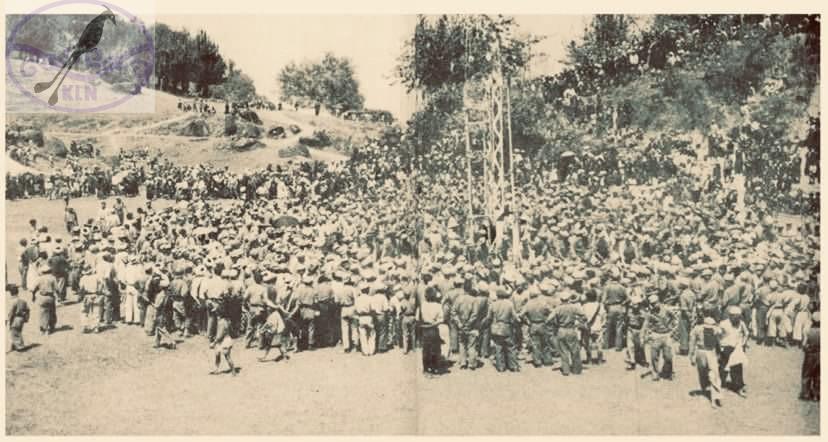 Clan oral history has it that Duwa Zau Bawm was the Gauri Lahpai chief who founded Sinlum Kaba, one of the many villages that dotted the Sinlum hills overlooking Yunan, China. The Sinlum hills were part of the domain of the Lahpai Gauri chieftain clan that stretched from the mountainous regions east of Myitkyina to the borderlands with China. The timeline must have been around the turn of the 1800s, as oral narratives relate that Shadip Zau Seng, Zau Bawm’s son, was one of the Kachin chiefs who attended the Hpunau Shakat or brotherhood/friendship feast given by British Colonel Sladin when he passed through Bhamo on a mission trip to the Chinese frontier in 1868. Clan renditions also make mention that two male buffaloes, with the longest of horns in the Bhamo valley, were slaughtered for the feast.

With the annexation of Burma in its entirety in 1885, British colonial rule came to the Sinlum hills also. The British saw fit to make Sinlum Kaba a frontier administration seat, and evicted the chieftain family from its ancestral land to make way for the plan. The reconstructed town of Sinlum Kaba had a British Frontier Service Officer in residence, and a strong fortified army garrison to guard it. A glimpse of what Sinlum Kaba must have been like in those days is given in Paul Strachan’s River Cruise blog of May 2020, Bhamo: City of Rumour: “In 1904, Scott O’Conner visited Sinlum Kaba, a hill station 6,000 feet up in the mountains above Bhamo. Established by NG Cholmeley of the Indian Civil Service, there were gardens with peach and cherry trees from England. Sinlum Kaba, rather than Bhamo became a centre for justice for the Kachin, far from thieving lawyers and the inflexibility of a district court.”

English gardens aside, Sinlum Kaba and its environs abound with untamed natural beauty – from orchid covered rocks and trees, pristine mountain streams and waterfalls, to rare species of bird and reptile that have caught the attention of noted naturalists. And then there’s the “rock” outside of town – the Lamu Ga Mada Lung, or View of the World Rock – a well-earned moniker given the truly spectacular, panoramic views it affords. From atop the rock, one is treated to expansive vistas of the Bhamo valley, of the Taping River as it meanders from its source in Yunan and merges with the mighty Irrawaddy. The rock is more commonly known today as the N’ra Lunghtawn, a name that evokes its haunting beauty, and hints at why it became a favored spot for despondent lovers to go pine for lost or unrequited love. The N’ra Lunghtawn has a gruesome side to its history as well. It was the place where locals suspected of being traitors or spies were summarily executed by the Japanese during WWII, their decapitated bodies tumbled down the deep precipitous gorge.

Another of Sinlum Kaba’s claim to fame is the Padang Manau or Victory Manau celebrated in March 1945 to mark the rout of the Japanese from Kachinland and Upper Burma. At least 1,500 Kachin Rangers poured into Sinlum Kaba to take part in the 3 day communal dance celebrations held from March 24 to 26. It is of note that the lowland Burmans did not initiate resistance against Japanese rule until March 27, a day after the Kachins had declared victory over the Japanese.

The government high school at Sinlum Kaba was the pride and joy of Sinlum Kachins as a beacon of education for many years. The school had its humble beginnings as a primary school, the first self-supporting school for the Kachins. It was established at Pangmu around 1903 by Nangzing Hka Jan with the help of her husband Rev. Lahpai Zau Tu, the Duwa of Pangmu, the great-grandson of the founder of Sinlum Kaba, and son of the founding chief of Pangmu. Nangzing Hka Jan was a daughter of one of the first 7 Kachins to be converted to Christianity, and received her education at the Anglo-Vernacular Baptist mission school at Bhamo. She completed 7th Standard, the highest level offered in the Kachin area at that time, and attended a Normal School to receive her teacher’s training. She started work as a teacher at the Bhamo mission school in 1899.

The first school was a small ramshackle building of thatched roofing and bamboo mat siding which was also used for church services on Sundays. The school started with about 12 students, all boys from surrounding villages, but the number steadily grew with some coming from as far away as across the border from China. This meant they needed to be housed and fed, and provided with school supplies such as slates and books. Duwa Zau Tu led them in clearing the jungle, farming rice, and cultivating garden vegetables for their daily needs.

During British colonial days, primary schools as a rule were government aided Christian mission schools or Buddhist monastery schools. But it took several years for the government to recognize the Pangmu school. When it finally did, the grant was for 25 students only, not enough to cover the more than 80 students the school had by that time. The British government did later recognize Nangzing Hka Jan for her pioneering efforts in education. At the Durbar celebrations held at Sinlum Kaba in 1923, the Sagaing Commissioner acting on behalf of the Governor, presented her with a certificate of honor and a silver wrist watch.

The school was moved from Pangmu to Sinlum Kaba in April 1928, but it remained a vernacular primary school, teaching only Burmese and Kachin. Duwa Lahpai Zau Tu was impatient for the school to start teaching English, but his requests for government assistance to upgrade the school to Anglo-Vernacular was rebuffed time and again. He was told it was still too early, that the hill Kachins were not yet ready to learn English. And so when his daughter Htu Raw came home from Rangoon University with a teaching degree (B.A.D.T) in 1936, Rev. Zau Tu asked her to start teaching English at the school right away, without waiting for government approval or assistance.

After the English classes had been going on for a while, Rev. Zau Tu took 3 of the brightest students with him to see the British District Commissioner (DC) at his office in Bhamo. The children, after being presented to the DC, proceeded to recite poems and songs in English. The DC was impressed enough to finally grant the Sinlum Kaba school Anglo-Vernacular status. This meant that the school would now receive government assistance to hire English teachers and acquire teaching materials.

About a third of the student population at the upgraded high school were boarders, come from far and near to take advantage of the school’s reputation as one of the top government high schools in the new Kachin State. Extra-curricular training such as livestock breeding, agriculture, and home economics proved highly popular with the students.

Many of the alumni who went through the Sinlum Kaba school in its many stages – primary to high – became trailblazers in their chosen fields. Lahpai Zau Bawm was editor and publisher of the first independently published newspaper in the Kachin language, Rev. Saboi Jum gained prominence on the national stage as a peace negotiator and founder of the Nyein Peace and Development Foundation, Dr. Lazum Brang, a Pangmu native, served for many years as surgeon-general and chief medical officer of the Kachin State Civil Hospital at Myitkyina, Matron Lasi Htang Lum became the first Kachin woman to become chief nurse administrator at the Myitkyina State Hospital, Maran Hkawn Lum, a granddaughter of Nazing Hka Jan and Rev. Zau Tu, was Principal of the Kachin State Teachers’ Training College, and Maj. Lahtaw Zau Mai was the first Kachin to serve as pilot in the Burma Air Force.

Rev. Zau Tu’s most ardent wish was for the school to one day become a higher institute of learning – a college or university – with “students milling about on campus” as he put it. Sadly, with the civil war that has engulfed the Sinlum hills since the 1960s, his vision never came to fruition. The Sinlum Kaba High School is now but a shell of its former glory, and the Sinlum folks today form part of the displaced population languishing in ramshackle camps along the border with China.