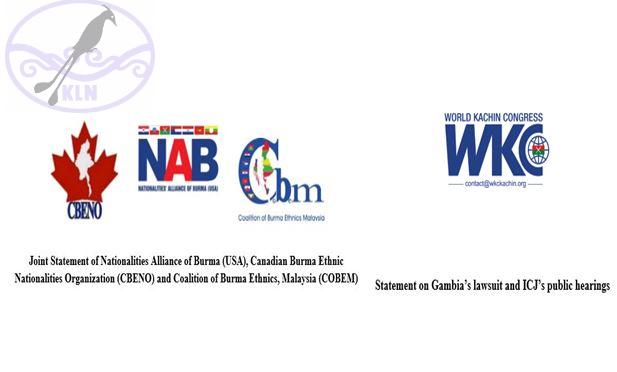 Ethnic nationalities organizations based in USA, Canada, Malaysia and a global Kachin network this week released statements expressing their supports for Gambia’s legal action against Burmese authorities and International Court of Justice’s public hearings scheduled for early December in the Hague.

The Gambia, on behalf of 57 member states of the Organization of Islamic Cooperation, filed a lawsuit against the Republic of the Union of Myanmar on November 11, 2019, for violating the commitments made under the 1948 UN Convention on the Prevention and Punishment of the Crime of Genocide against the Rohingya people.

In a joint statement by US-based Nationalities Alliance of Burma (NAB-USA), Canada-based Canadian Burma Ethnic Nationalities Organization (CBENO) and Malaysia-based Coalition of Burma Ethnics, Malaysia (COBEM), the ethnic organizations said, “Like the Rohingya, other ethnic nationalities of Burma suffer from serious and persistent violations of basic human rights, and are subjected to violent persecution under military rule. It is common practice by the Burmese military to conduct arbitrary arrests and detention, brutal beatings and torture, sexual assaults and rape, land confiscations, and indiscriminate killings against vulnerable ethnic nationalities in ethnic regions. The continued presence of the military in and around villages in ethnic areas is enabling the perpetuation of such brutal treatment of ethnic nationalities.”

The ethnic organizations also call for “international community’s actions to bring the Burmese military to justice, and make them accountable for its widespread and systematic violence.”

Similarly on Thursday, World Kachin Congress, a network of Kachin organizations and communities around the world, issued a statement saying it welcomes Gambia’s lawsuit and the International Court of Justice (ICJ)’s public hearings.

World Kachin Congress’s statement said, “As in Arakan State, our brethren in Kachin and Northern Shan States have been subjected to arbitrary arrests, detention, and extrajudicial killings. Kachin women and girls have been sexually assaulted, raped and killed by Burmese soldiers. Innocent villagers have often been abducted, interrogated and tortured, while Kachin lands have been seized and occupied, and churches and houses pillaged and burned down. All these criminal acts, committed by units of the Burma Army, have been going on for decades, and the perpetrators have not been brought to justice.”

“Like the Rohingya, Kachins have been forced to flee their homes for fear of persecution and human rights violations. Since the war resumed in Kachin areas in 2011, over 100,000 Kachins have been internally displaced and are living in IDP camps, unable to return to their homes due to the Burma Army’s continued presence in and around their villages. Furthermore, Kachin IDPs in remote areas are still deprived of basic humanitarian needs, as the authorities have blocked aid from reaching their camps.” said in the statement.