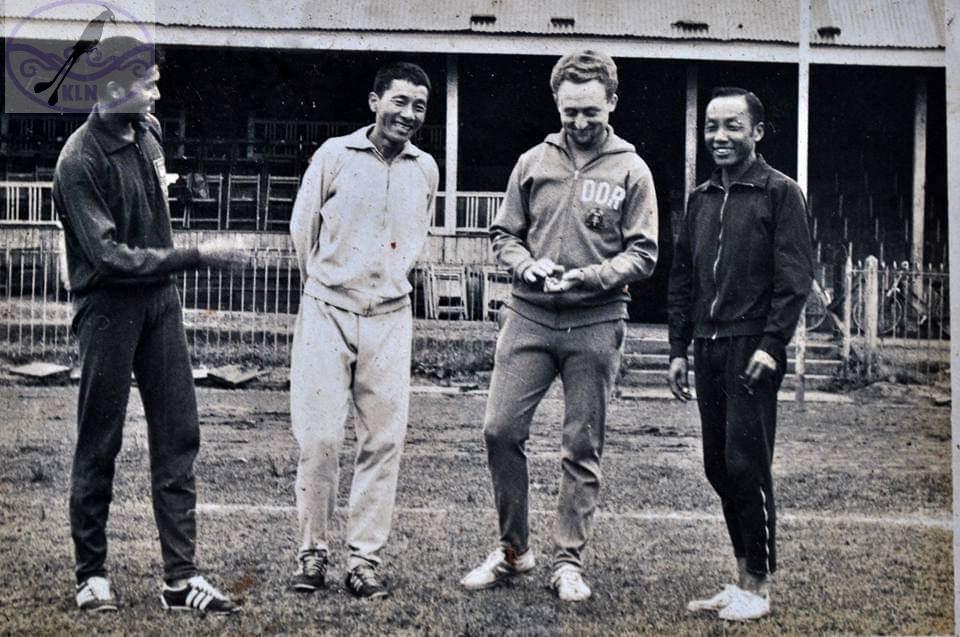 Myitung Naw, Shingbwi Gam and Ah Hpu were three outstanding Kachin athletes who represented Burma in international marathon and long distance events in the early years of the country’s independence. They were all discovered while serving in the army, in the now defunct all-Kachin infantry units known as the Kachin Rifles. In addition to the medals won, they were rewarded with rank promotions in recognition of their athletic contributions representing Burma in the international sports arena.

These Kachin long distance runners are rarely remembered today, but in their heyday their consistent wins prompted the leading English language newspaper of the day, The Nation, to declare that “From now on, nobody can beat the Kachins in the marathon event.” The Kachin runners proved to be worthy goodwill ambassadors for the country on the world stage at every given opportunity.

There was Myitung Naw, who came into prominence in the post-independence era sports world as the leading marathon runner of the country. He was small of stature but his stamina and speed were legendary. He competed in a number of international sports meets including the First and Second SEAP Games in 1959 and 1961, the Boston Marathon in 1959, the Summer Olympics at Rome in 1960, and other international marathon events in Japan and Australia. He received the bronze medal for the marathon at the Asian Games in Jakarta in 1962.

Shingbwi Gam was a younger contemporary of Myitung Naw. Both of them had served in the Kachin Rifles – Myitung Naw in the Fourth, and Shingbwi Gam with the First. At the First SEAP Games held in Bangkok in 1959, Shingbwi Gam came in first in the 10,000 meters event, finishing one lap ahead of his closest competitor, Myitung Naw. He was selected together with Myitung Naw to represent Burma in the marathon event at the Jakarta Asian Games, but failed to win any medals – the 10,000 meter being his forte, not the marathon. Shingbwi Gam was remembered fondly by his fellow athletes. As he was fading away as a long distance runner, a young, up and coming tennis star of the time remembers meeting him several times when they were training at the Aung San Sports Stadium. He said the younger athletes all affectionately called him “Ah Pho Gyee“, or old man.

Ah Hpu gave the performance of his life at the No.2 SEAP Games held in Rangoon in December 1961. He represented Burma in the 10,000 and 5,000 meter events together with Kachin counterparts, Myitung Naw and Shingbwi Gam.

The 10,000 meter event turned out to be a real nail biter of a race between Ah Hpu and Myitung Naw. After the first 20 laps, the 2 Kachin runners picked up speed and had the lead all to themselves.Taking turns at the front of the pack, they battled each other up till the last lap, at which point Myitung Naw was leading, with Ah Hpu following close behind. But when they were about 40 yards from the finishing line, Ah Hpu, with a great burst of speed overtook Myitung Naw, and narrowly beat the marathon champ. It was such a thrilling finish, the Aung San Stadium reverberated with the sound of spectators cheering and clapping. It turned out they had left behind the nearest competitor by a lap and a half. Their records for the event were: Ah Hpu at 32:37.6, and Myitung Naw, 32:39.6 minutes.

Ah Hpu again competed in the 5,000 meter race the next day with Shingbwi Gam as the other competitor from Burma. Ah Hpu was the event’s gold medalist at the First SEAP Games in 1959, but as he had competed in the grueling 10,000 meter just the day before, conventional wisdom was that he would not be able to best Shingbwi Gam. Shingbwi Gam was indeed in the lead for most of the race until the last lap, when Ah Hpu caught up with him and eked out a victory at the finishing line. Ah Hpu had done it again– winning the Games’ long distance events back to back. Both runners broke the 15:50.5 record set at the First SEAP Games by Ah Hpu. Ah Hpu’s new record was 15:46, and Shingbwi Gam’s was 15:47.3 minutes.

The other Kachin medal winners at the Games were Naw Hpa Hka, who won silver in the discus event, breaking the record he had set at the 1959 SEAP Games, Byawe of the 3rd Kachin Rifles who came in 3rd in the 1,500 meter race, and Laju Yaw who won bronze in the javelin event.

I still remember both Myitung Naw and Shint Beijing Gam as great marathoner and long-distance runners. I really admire Myitung Naw as he was so small of stature but having such a big heart to win grueling marathons. After the era of the great Kachin long-distance runners came the crop of Indians or Anglo-Indian runners, long distance again. Jimmy is the one who comes to my mind right now. These runners were tall, lanky athletes who had the enormous energy and talent to run such great distances.