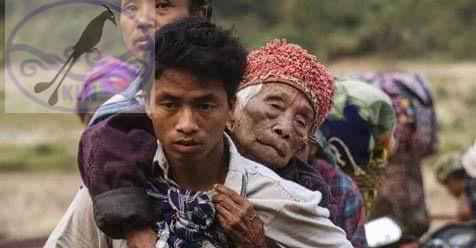 If a picture is worth a thousand words, the photo above poignantly captures the pain and suffering of decades of war and displacement endured by the Kachins. The iconic photo by Hpra Zau Ring of The Kachin Times was taken as villagers from the Njang Yang conflict zone started arriving at the Tanghpre boat jetty in May 2018 after a tortuous escape through the jungle north east of the capital Myitkyina. The matriarch in the photo is Tsup Na Kaw, 114 years old by her family’s reckoning. She had been through 5 war evacuations in her life time, including once during WWII, and had asked the family to leave her behind this time round. 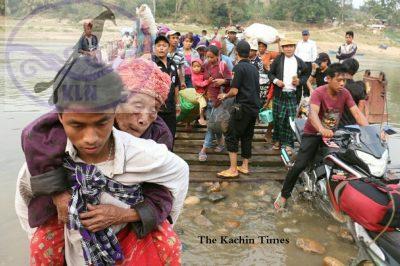 It has been 8 long painful years of displacement and uncertainty for Kachin war victims, from the time of renewed hostilities in June 2011 between the Burma Army and the Kachin Independent Army (KIA) after a 17-year hiatus. It is estimated that the renewed war has displaced about 130,000 Kachin civilians who have been languishing in over 170 camps scattered across areas controlled by the government as well as the KIA/O. With each passing year, their dream of going home becomes more distant and less of a reality.

2018 was a particularly brutal year for Kachin war victims. The month of April alone saw some 5,000 added to the displaced population, brought on by intensified clashes between government forces and the KIA that began in early April. The areas of conflict centered around the amber rich region of Danai, the jade–land of Hpakant, and remote Njang Yang in the “Triangle Area” between the Mali and Nmai Rivers, major tributaries to the Irrawaddy. As villagers from these frontline areas attempted to flee to safer destinations, their escape routes were blocked by government troops. The army also prevented religious and civil society groups from coming to their rescue or deliver aid. The villagers remained trapped in the jungle for weeks, the health and well-being of the elderly, the sick, new born babies and heavily pregnant women among them put in serious jeopardy. Such was their fate well into May, until they were allowed to go free.

The humanitarian crisis generated by the renewed war has been met with a typical Kachin response – communally and collectively – as can be seen in the emergence of a strong coordinated aid group, the Joint Strategy Team (JST). The JST brings together Kachin religious, community, and non-governmental organizations, to act as one efficient local body to comprehensively address the needs of displaced Kachins. While spearheading delivery of urgent IDP humanitarian aid, JST has also been looking ahead. A united Kachin strategy on IDP return and resettlement has been crafted, and a handbook for IDPs in the Kachin language produced. The handbook, in itself a significant achievement, informs IDPs of their fundamental rights to enable them to make sound decisions on their eventual return and resettlement.

The IDP issue has also energized Kachin youth to become more politically active and vocal in advocating the rights of their displaced kin. In early May 2018, youth groups organized prayer vigils and public protests calling for the rescue and safe passage of those trapped in the jungles. Similarly, on June 6 2019, the 8th anniversary of the Kachin war, young activists organized street performances portraying the suffering of the IDPs and their yearning to return home. The brave attempts have only brought on law suits and prison terms for those at the forefront of the movement. Three protest leaders were sentenced to 6-month prison terms each for ‘defaming’ the army, and two of the street performance leaders were sentenced to 15 days’ imprisonment for “violating” the Peaceful Assembly Law. When one of them presented a broken set of scales to the presiding judge as a form of protest, he was given an additional 3 months in prison.

The army declared a unilateral ceasefire in December 2018, and began initiating limited IDP returns, but the initiative has not been well received. In the opinion of Rev. Dr. Hkalam Samson, a leading light in IDP assistance efforts, it failed because IDPs were sent back to places which are still conflict zones, and to places other than their original home. Furthermore, the army failed to work with the Kachin Humanitarian Concerns Committee, which is made up of JST leaders and coordinates with the government’s National Reconciliation and Peace Center as well as the KIO to effect a safe and dignified return for IDPs. Another weakness of the initiative is that it failed to take into consideration IDPs from camps in the borderlands under KIO control.

The entities that can make the IDP dream of going home a reality – the elected government, the army and the KIO – have yet to come to a resolution despite the many rounds of talks they have had over the past 8 years. One can only surmise the reasons for the impasse – lack of visionary leadership, prioritizing personal or institutional interests over the common good, external forces pulling strings behind the scenes, among others?

While the plight of Kachin IDPs is highlighted here, the dire situation of IDPs elsewhere – in the Shan, Karen, Chin, and Rakhine areas – needs to be acknowledged also. One would think that the Kachin problem, smaller in magnitude and less complex in nature than that of the Rohingya, for example, would be easier to resolve, but the sad reality is that after 8 long years, Kachin war refugees are still a long way from returning home.