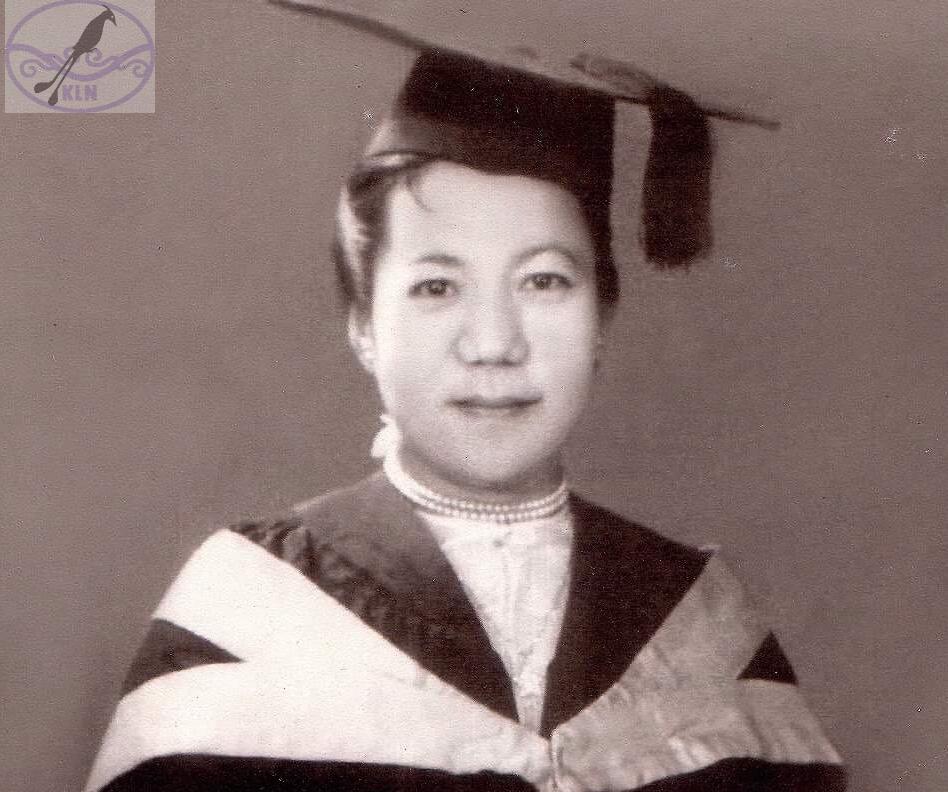 Lahpai Htu Raw, like her pioneer educator mother Nangzing Hka Jan, was a trailblazer. The 9th child, and 4th daughter of the Pangmu Duwa Rev. Lahpai Lahpai Zau Tu and Nangzing Hka Jan, she was the first Kachin woman to receive a college education.

A bright child, Htu Raw learned to read even before she started school. As a toddler, her headmistress/teacher mother would take her to school – piggy-back Kachin style – and Htu Raw would peer over her mother’s shoulders to look at the work the students brought to the table for correction, and learn to recognize words and start reading on her own.

Upon completion of her primary education at her mother’s Pangmu school, she was sent to Bhamo like her older siblings to continue her education at the Anglo-Vernacular middle school there. Passing the 7th Standard government examination in 1929 meant she would have to go farther afield to continue her studies as it was the end of the road where schooling was concerned in Bhamo or elsewhere in the Kachin area. And so she left for Mandalay to attend the American Baptist Mission Girls’ High School, where Ludu Daw Amar, Burma’s pre-eminent woman journalist and prolific dissident writer, was one of her classmates.

She joined Judson College in 1932, becoming the first Kachin woman to attend college. At the urging of her parents, she opted for the Diploma in Teaching (DT) course instead of a Bachelor degree upon completing her 2-year intermediate classes. She graduated with a B.A. (DT) degree in 1936, and got married the same year to Dr. Maran La Myen. However, she did not go along with her husband on his medical posting but remained at Sinlum to start English classes at the vernacular primary school her parents had founded in 1902 as the first self-supporting school for the Kachins, now a government aided school, moved from Pangmu to Sinlum town.

The school had become a beacon of education for the Sinlum Kachins, but Rev. Lahpai Zau Tu had loftier ambitions. He was impatient for the school to start teaching English, and beyond that, envisaged a higher institute of learning – a college or even university– that would be the pride and joy of all Kachins. He had made repeated requests for government assistance to upgrade the school to Anglo-Vernacular, but was rebuffed every time – told that it was still too early, that the hill Kachins were not yet ready to learn English. And so when his daughter Htu Raw came home with a teaching degree, Rev. Zau Tu asked her to start teaching English at the school right away, without waiting for government approval or assistance.

After the English classes had been going on for a while, Rev. Zau Tu took 3 of the brightest students with him to see the British District Commissioner (DC) at his office in Bhamo. The children, after being presented, proceeded to recite poems and sing songs in English. The DC was impressed enough to finally grant the Sinlum school Anglo-Vernacular status. This meant that the school would now receive government assistance to hire English teachers and acquire teaching materials. Htu Raw remained in this position for 2 years until her brother Zau Neng finished his teachers’ training and came home to take over from her. Only then was she able to join her husband at his posting.

Some of the more notable of Lahpai Htu Raw’s students of that time were Matron Lasi Htang Lum, the first Kachin woman to become chief nurse administrator at the State Civil Hospital in Myitkyina, and Rev. Saboi Jum, who gained prominence as a peace negotiator and founder of the Shalom or Nyein Peace and Development Foundation.

When the school was upgraded to middle school in 1946, Htu Raw, who had gone back to teach at the school at the urging of the chief education officer of Sagaing Division, was made its headmistress. She continued as headmistress when the school was again upgraded to high school in 1948. With its consistent record of high percentage passes in the government regulated matriculation examinations, the school soon acquired a reputation as one of the top government high schools in the new Kachin State. Sadly, with the civil war that has engulfed the Sinlum Hills since the 1960s, the school is now but a shell of its former glory.

As for Lahpai Htu Raw, she did not let family life stop her from pursuing further education and career advancement opportunities. With her youngest son in tow, she went to Rangoon to study for the B.A. (Ed) course from 1953 to 1955. In 1956, she was selected to join a team of Burmese educators on a US government sponsored 3–month tour to study the American education system. In 1959, she again received deputation from the Education Department to pursue the B.Ed. degree (which was then a post-grad course). She was transferred to Bhamo in 1960 to take up duties as head of the government high school there, and in 1964, was appointed District Education Officer for Myitkyina.

After retiring from the Education Department in 1975, she lived out the rest of her life as a community and church leader at her home in Bhamo.