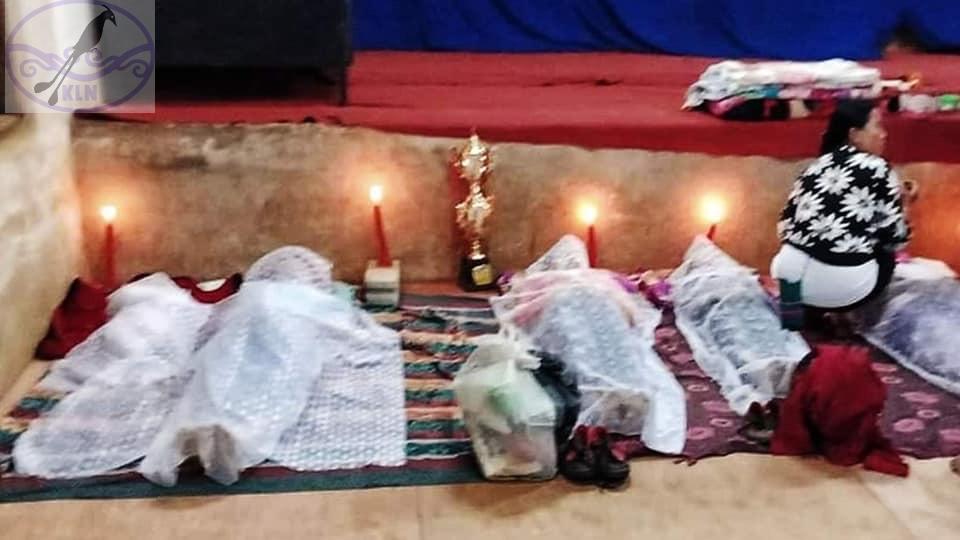 Saturday August 31, 2019 looked to be a fine sunny day until the villagers of Mawhik were rudely awakened by the sound of gunfires around 7 am. Mawhik village is a suburb of Kutkai town in northern Shan state. It is right by the toll gate on the busy Mandalay-Muse road, also known as the Burma Road, the major trade route between Burma and China. What had transpired was that two mortar shells had fallen in Mawhik village, one plummeting through the roof of the Zahkung family home killing five family members, Sumlut Htoi Ja (aged 36), Zahkung Nang Mun Pan (aged 14), Zahkung Zau Hkun Lat (aged 8 ), Lajing Saw Merry Lu San (aged 18), and Lasham Hkawn San (aged 4 mths), and injuring two others – Hpaugun Bawk La (aged 28) and Lasham Roi Bu (aged 14). Another shell fell on the Hang Gau family home injuring Hang Gau Gyung Dau (aged 40). Two other mortar shells had fallen in the nearby forest.

Early that morning around 7 am troops from the three Northern Alliance group, “Nyinaung Thonephaw Maharmeik“, entering Kutkai town from Myothit No. 5 Quarter encountered Burma Army troops near a pagoda, and a series of battles ensued. The two sides began fighting somewhere between No. 5 and No. 8 Quarters. After the initial small arms fire exchange, artillery fire was exchanged. The Burma Army fired mortar shells from at least three locations – its bases inside Kutkai town, the Loi Un Hill located between No. 3 Quarter and No. 6 Quarter, and the pine forest located between Loi Un hill and Man Hkam where some Burma Army soldiers are stationed. The Northern Allied troops fired mortar shells from Myothit No. 5 Quarter through which they had entered the town.

Sumlut Htoi Ja, born in old Mawhik village in 1994. She attended Basic Education Primary School at Mawhik, and Basic Education High School in Kutkai. Her parents are Sumlut Gam Hpung and Marip Ja Seng. She was married to Zahkung Zau Bawk in 2002. She was a clerk for the village’s welfare organization from 2012-2018. She has been an official of the Parent Teacher Association at Mawhik Basic Education Primary School since 2017. Her neighbors said she is the kind of person who is always willing to help others. She regularly participates in village affairs and social events.

Zahkung Nang Mun Pan was born on November 1, 2005, in Mawhik village. Her parents are Zahkung ZauBawk and Sumlut Htoi Ja. She attended Basic Education Primary School in Mawhik and Myoma Middle School in Kutkai. Nang Mun Pan was an excellent soccer player. She won the Kutkai town administrator’s championship cup in 2018 with her team. She was an active church member who was always willing to participate in church events.

Zahkung Zau Hkun Lat was born on March 12, in 2011. His young life was cut short too soon. His parents are Zahkung Zau Bawk and Sumlut Htoi Ja. He attended Basic Education Primary School in Mawhik.

Lajing Saw Merry Lu San was born on Dec 23, 2001. Her parents are Saw Naing @ Lajing Hawng Ze and HpaugunRoi. She attended Basic Education Primary School in Mawhik and No. 3 Basic Education Middle School in Kutkai. In 2017, she was married to Lasham Naw Ja. She was a friendly person and got along with friends and neighbors.

Lasham Hkawn San was born on May 4, 2019 in Mawhikvillage to parents Lasham Naw Ja and Lajing Saw Merry Lu San.

A funeral service was held for the victims on Sept 1, 2019. Over 1,500 Kutkai residents attended, braving the volatile security situation, to honor lives lost tragically and unnecessarily to armed conflict.