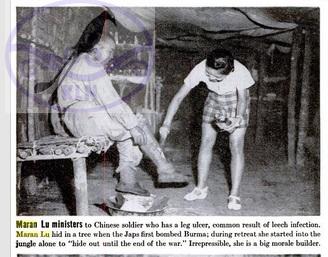 At a time when women fighters were not allowed to join the army, one Kachin woman beat the odds to become an enlisted soldier, fighting in the front lines with her male counterparts. Posing as a man, Hkachyang Raw enlisted with the Northern Kachin Levies, a British special force during WWII.

Hkachyang Raw joined the Levies because she wanted to avenge the deaths of her brother and her father, a war veteran who had served with the British, at the hands of the Japanese who had also burned their house to the ground. So in November 1943, Hkachyang Raw cut off her long hair, changed into man’s clothing, and taking the masculine name of Sin Wa, enlisted with the Kachin Levies at Sumpra Bum, a hilly town to the north of Myitkyina.

She was accepted without much scrutiny or examination as the Burma Campaign to drive the Japanese out of Burma was in full swing, and the Allies needed all the recruits they could gather. As with other new recruits, she was accepted upon demonstrating she could pull a rifle trigger at the end of a short training period. She was duly sent to the front lines to fight the Japanese as a Kachin Levy.

Hkachyang Raw at first, managed to blend in, staying and fighting with her male comrades. After some time however, her strange behavior caught the attention of some of her compatriots. She would never bathe in the stream with them during the day, only by herself at night. She wore oversized shirts buttoned to the neck, even in the hottest of weather. She could cook better than any in the unit. Moreover, she did not make friends with anyone, never talked much, and never laughed at all. So they began to suspect the true nature of her gender and reported it to the superiors.

And so Hkachyang Raw was summoned to the Sumpra Bum Hospital for a medical examination. The medical doctor after examining her exclaimed, “Oh, my God! You’re extremely brave for a woman!” and shook her hands in awe. Hkachyang Raw began to weep uncontrollably, and the army officers had to console her, persuading her to go back to her village. They gave her one hundred Rupees as reward for her brave service.

Just as Hkachyang Raw is to be commended for her bravery, to dare take up arms like any of the menfolk to defend the homeland, her male comrades deserve to be lauded for their proper behavior towards her, never harassing her or taking advantage of her situation, but doing the right thing by reporting their suspicions to the superiors. It is recounted that they did have a good chuckle over the matter – some reacted with surprise, some admired her guts – when they were told the true gender identity of Sin Wa alias Hkachyang Raw.

Maran Lu was a wartime nurse who first served with the British and then with famed “Burma Surgeon” Dr. Gordon Seagrave of the Namhkam Mission Hospital. She was part of a medical team that took care of wounded and sick British and American troops retreating north from the onslaught of Japanese troops in early 1942.

The US government awarded Nurse Maran Lu with a Bronze Star Medal “for heroic service” rendered during the period of January 9 to May 20 in 1942. The citation for the medal tells her wartime story:

As a nurse in a medical unit organized to provide aid for Allied Forces fighting in Burma, Maran Lu, together with the other nurses in this unit, underwent indescribable hardships and fatigue, worked with limited supplies and facilities, yet saved many lives and did much to maintain morale of troops during the fighting in and the retreat from Burma. Her unfailing attention to duty, tireless performance of all tasks, resourcefulness, courage, and unceasing good humor, won the respect and admiration of every one with whom she served.

The British government also awarded her a Certificate of Honor for displaying “exceptional devotion to duty in circumstances calling for loyalty and fortitude during the Burma Campaign December 1941-May 1942.”

Nurse Maran Lu was featured in a 1943 Life Magazine article after the magazine’s visit to the unit in Burma. One of the photos in the pictorial magazine shows Nurse Maran Lu in stylish checkered shorts, treating a Chinese soldier with a leg ulcer which is a common result of leech infection. The photo caption describes her as “irrepressible” and a “big morale builder”.

Nurse Maran Lu’s husband Capt. Kumje Tawng (Wa) was also a highly decorated war veteran, recipient of the Military Cross (MC) and the Burma Gallantry Medal (BGM) for heroic actions during WWII. After independence, he became District Commissioner (DC) for Myitkyina, the highest administrative post in Kachin State. Musical talent runs in the Kumje family as well. DC Kumje Tawng loved to play the violin, and the eldest daughter is an acclaimed pop singer going by the stage name of K. Ja Nu.

CC Naw Ja: In Quest of Greatness (a reprint of Maj. CM Enriquez’s booklet by the same title, with additional writings and photos by the publisher); self-published, 2003.