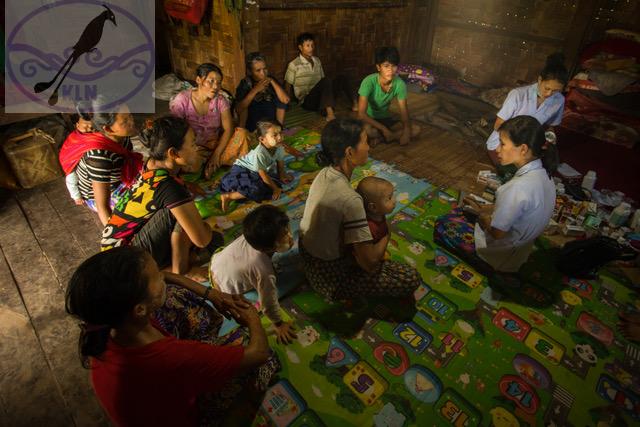 In January 2009, Haruki Murakami received the Jerusalem Prize, a biennial literary award given to writers whose work deals with themes of human freedom, society, politics and government. In his acceptance speech Murakami spoke of the “System” which oppresses us.  He said: “Each of us possesses a tangible living soul. The System has no such thing. We must not allow the System to exploit us.” In Myanmar, where an unrepresentative structure of national governance has been failing us for over 70 years, we must all unite to change this. For if an unequal status quo is allowed to continue, even the small gains that we have made in peace and democratic reform will not be sustained.

We have seen the potential for real change, but windows of opportunity come and go. The nationwide pro-democracy protests of 1988, which came a year before the Gate of Heavenly Peace or Tiananmen Square protests, was such a one. But democratic aspirations were ruthlessly put down when the armed forces staged yet another “coup”, replacing a pseudo-civilian government of former military officers. Then came the 1990 general election, the first multi-party polling since the initial military coup of 1962. The National League for Democracy won with a landslide, but the new military government refused to recognize it, forcing many students and elected candidates to flee to the borderlands for fear of retribution. Again, what could have been a unique opportunity to come together to change an entrenched system of political mis-governance did not materialize.

Then there were the ceasefire years of the early 1990s, with the potential for resolving the root causes of decades of armed conflict. What the ceasefires offered was space to help war-torn communities rebuild their lives while awaiting promised “free and fair” elections to take place. Thanks to the lull in fighting, some 450 villages in Kachin and northern Shan States were resettled. Tragically, however, when the ceasefire was breached and fighting resumed in June 2011, half of these villages were deserted, with many burned to the ground during the following year. To this day, ceasefires have not led to political solutions in our country, as they have not been about achieving solutions but gaining tactical advantage. Against a backdrop of conflict, this has become a strategy aimed at maintaining the upper-hand, politically and economically, to strengthen authority and control over national governance.

2015 was another year of hope. When Daw Aung San Suu Kyi’s NLD garnered the majority of seats in both Houses of Parliament as well as the Regional Assemblies, many of us – NLD or not – shared the euphoria of victory. We, the non-Bamar co-founders of the Union, anticipated that in the State and Regional legislatures at least, even though the cabinets and chief ministers would be from the NLD as the election winner, they would look more to the people than to the party. In Kachin State, for example, we expected that the cabinet would be Kachin first and NLD second, and that this would be the first real move towards a purposeful process of national reconciliation. Sadly, it turns out that we were too hopeful, too naïve. National leaders have failed to take reflective action on the scale of reforms that are needed.

The reality is that, despite its landslide election victory, the NLD government seems unwilling or unable to stand up for peace and national inclusion. Concession after concession has been made to security-first approaches, threatening civil liberties and allowing military operations to continue in ethnic nationality areas. Most notably, Parliament has approved military budget increases year after year at the expense of under-funded sectors such as health and education. Whether in government or armed opposition, Myanmar remains one of the most militarized countries in the world.

Clearly, the political system of our country has failed us, stripping the peoples of their rights to justice and self-determination. This means that it is difficult to think in terms of ceasefires or elections as the ways to resolve our crises. We need, therefore, to rethink everything, going back to basics to examine the reasons for failure and identify the root causes of our conflicts. As a start, this suggests that we have to reject scenarios where ceasefires occur without political dialogue – a case of the cart coming before the horse – or winning elections without fulfilling election promises. We are living in a fast changing world. Faced with multiple threats from climate change to armed conflicts to extreme poverty, the old formulae of “democracy” and “free markets” are no longer working. Neither, it is painful to say, is our peace process.

In order to address this, I believe that we have to consider a much broader picture of challenges in our country. As I see it, peace and stability in the current situation can only be achieved through the engaged efforts of civil society. As such, civil society involvement must be courted and supported. As our country seeks to emerge from decades of conflict and centralised rule, peace and democracy have to be built by the people. They are not a military construct, and they cannot be imposed top-down within an unrepresentative political system. This means that democratic structures and civil society networks that have their roots at the grassroots level must be strengthened across the country. This means the inclusion of all nationality peoples and cultures. In this way, community requirements and aspirations will support – and be reflected in – political change.

The situation is now urgent. At this time of transition, we need all the domestic and international support that we can get to help promote and develop the capacity of our “next layer” leadership and societal institutions. However, as our endeavours continue, it is often disheartening to see the stance taken by certain international aid agencies that can only be interpreted as negating the rights of local civil society organisations (CSOs) and undermining our democracy. A case in point is how the World Bank glosses over and misrepresents issues such as community obligation in foreign loan debt repayment and the role of local CSOs in the selection of Township Technical Assistance (TTA).1 The sentiment to undermine local CSOs is apparently shared by actors in the European Union. One of its officers recently said in the capital Naypyitaw that “the EU is not accountable to civil society”. They should realise that meaningful change in our country will not simply come through government-to-government inter-actions.

As we envision it, the role of international institutions and donors is not as enablers of an unrepresentative political system that needs reform. Rather, they should be looking to help address inequalities and end mis-governance that sustains conflict. Unfortunately, perhaps unintentionally, international donors are seen to be supporting the existing political system, and this is causing the space for CSOs to shrink. We feel that they should put more energy into ensuring that Myanmar move from a centralised political system to a federal, decentralized Union where the rights of all ethnic nationality peoples and citizens are represented and respected. This would pave the way for tackling such fundamental issues as establishing a fairer political economy, expanding educational opportunity or setting an effective agenda to address climate change. These are essential concerns that everyone in the country can work together on.

Related to this, one worry often voiced by local peoples over the past decade is that the growth of international non-governmental organisations (NGOs) and other foreign-aided programmes has often seemed to come at the expense of local civil society organisations. This is because the programmes are often decided, designed and managed by the donors and international actors amongst themselves, rather than through participatory consultation with local recipients. This is the type of marginalisation that community-based groups say that they often experience.

To expand further, our concern is that donors, United Nations agencies and international NGOs often appear to see local CSOs only as “implementation partners“. In this kind of top-down structure, the key concept of “localisation” – so vital in effective aid outreach, delivery and implementation – is glaringly missing. Looking at the experience of impasse in our country, they need to understand that their approach is counter-productive. The lack of opportunity for civil society to be included in the decision-making process, to voice their concerns over matters vital to their livelihoods and lands, actually acts as hinderances to the process of democratic reform.

Looking to the future, this is an imbalance that we believe can easily be rectified by having greater CSO presence on the committees and decision-making processes within the donor networks and systems. This should not be difficult. But, at the moment, there is still a long way to go. In the meantime, international organisations should take active steps to improve their methods of partnering with local community-based organisations, taking care not to undermine their voices or input in the field.

On the part of Myanmar CSOs, it is also time that they make their opinions clear, to decide not to “partner” with, or take funding for, programme implementation that they are not made part of in the INGO design. Myanmar NGOs and CSOs should bear in mind that, just as in the political arena, making too many concessions to an unrepresentative political system will not produce positive results. The national NGOs and CSOs must realise that when they compromise their rights, they weaken their struggle for change.

There are lessons to be learned for Myanmar civil society organisations as well – not to repeat the mistakes of the international agencies. More specifically, the more established Myanmar NGOs should make sure that they do not act as stumbling blocks to the emergence of local CSOs. In some parts of the country, the government and donors even create their own “NGOs” to try and gain access to hard-to-reach areas.2 Again, this is counter-productive, causing local disquiet and resentment. The well-established principles of “Do No Harm” should always be followed.

In summary, much has changed during the past few years in our country, with some spaces opening up and others closing, while further changes are to be anticipated during the coming years. Questions then arise as to how prepared are we to deal with these changes. We need to reflect upon this deeply. How ready are we, as donors and recipients, to make our efforts more responsive and apposite to meet the requirements of our country’s shifting social and political challenges?

We hope and pray that all of us – individually and institutionally, domestically and internationally – are prepared to address the crises of our uncertain times. The goal must remain the transformation of an unrepresentative system that, in the 21st century, continues to fail our peoples and country.

Lahpai Seng Raw is a 2013 Ramon Magsaysay Award winner and co-founder of the Metta Development Foundation and Airavati. She is also a delegate at the 21st Century Panglong Conference.

For a recent discussion on the community dilemmas of transitional change in the Myanmar-Thailand borderlands, see the interview by Nyein Nyein with Naw K’nyaw Paw, General Secretary of the Karen Women Organisation and 2019 recipient of the International Women of Courage Award: “‘Women in Leadership Positions Must Speak for All Women’”, The Irrawaddy, 31 May 2019.

This commentary previously appeared in the Transnational Institute (TNI)’s website.