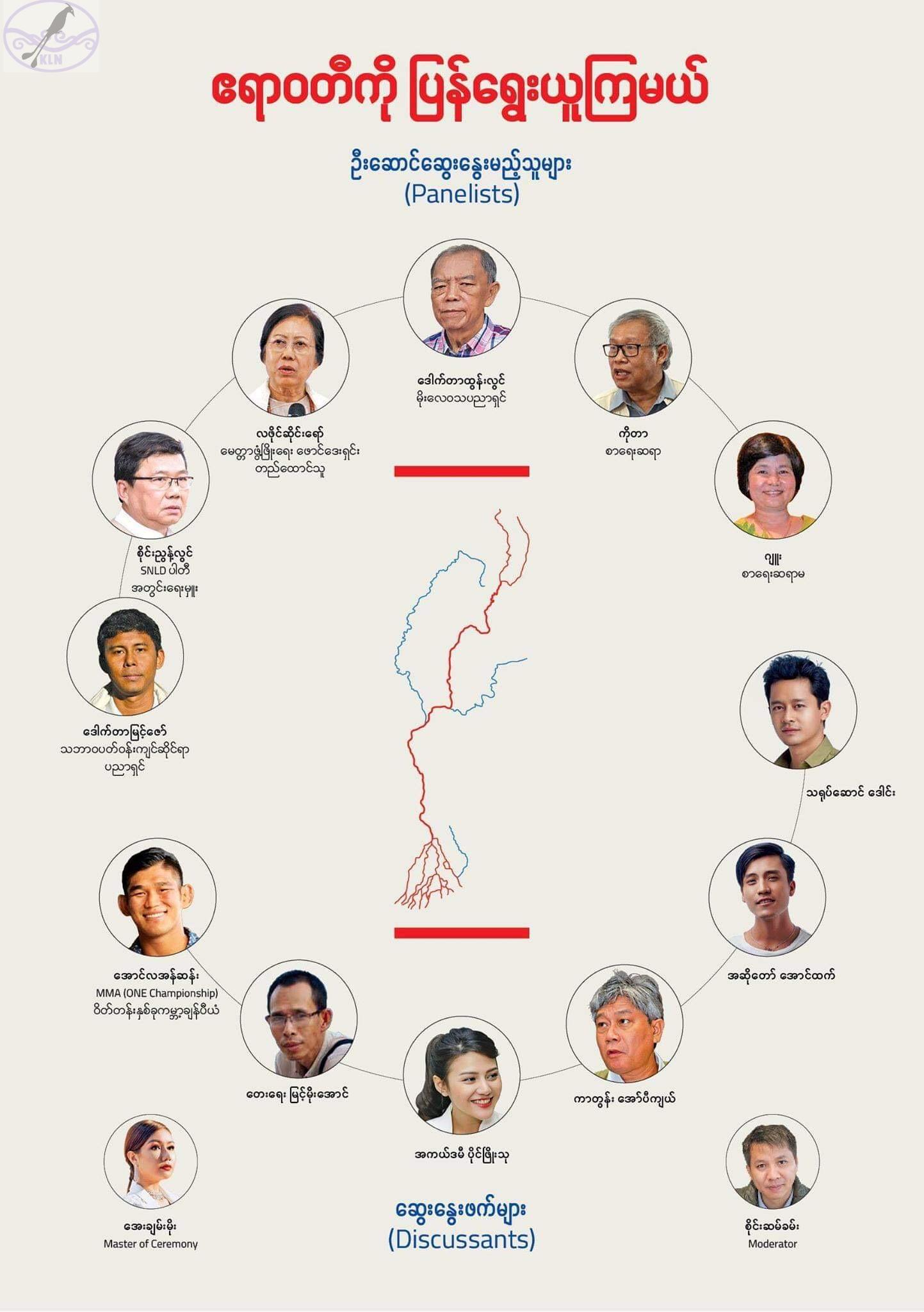 (English version of remarks delivered by panelist Lahpai Seng Raw on the public discussion event at Novotel-Yangon, on April 20, 2019)

I am from Myitkyina, a Kachin, born and bred in the town just 27 miles downstream from where the Mali and NMai Rivers merge to form the great Irrawaddy, life blood of our nation. Myitsone, the confluence site, has added significance for us Kachins in that it is the heartland of our cultural identity. So it would not be a stretch to say that the Irrawaddy is part of my life, just as it is for all who call Myanmar home.

To have the Irrawaddy flow freely for all time is a cause very dear to my heart. And putting my money where my mouth is, I used the USD 50,000 I received from the Ramon Magsaysay Award Foundation as seed money to establish the non-profit organisation Airavati with a few like-minded friends in 2014. Airavati’s major work entails preserving the environment, culture, and way of life of the diverse communities that flourish along the Irrawaddy’s path – from its watersheds in the upper reaches of Kachin State to the delta region in the south.

The Irrawaddy is a precious national heritage. From time immemorial, the Bamar and other ethic nationals have lived and thrived along its riverbanks. Not only is it an amazing natural ecosystem, it is an icon of our cultural and national identity. If we do not safeguard this treasure, we will suffer from its devastating lost just as our neighbors to our immediate east did when the Chinese dammed the Khong River within their borders. The impact on downstream countries like Thailand, Laos, Cambodia and Vietnam has been disastrous and irreversible.

Protecting the Irrawaddy therefore, is of national importance as the whole country’s fate and existence depends on it. Building a dam near the confluence site, or the Myitsone Dam Project as it is called, poses irreparable cultural, ecological and economic damage to the nation. Furthermore, the existential threat posed by the Myitsone Dam on communities within the reservoir inundation areas and those downstream is enormous, given that they are in an earthquake prone zone. In the meanwhile, communities in the confluence area have been forced to relocate, living in limbo in places where they could not engage in their traditional livelihood.

Moreover, the lack of transparency and consultation with communities whose lives would be directly impacted have given rise to passionate opposition against the project not just by Kachins, but by all Myanmar nationals who love and cherish the Irrawaddy for practical as well as sentimental reasons.

We the peoples of Myanmar, with roots in different parts of the country, may differ in ethnicity, language and faith systems, but when it comes to saving the Irrawaddy, we are of one mind. This unity of purpose will empower us as we harness it in taking steps to put a stop to a project that will do irreparable harm to our beloved Irrawaddy. If we, each and every one of us Myanmar citizens, dig deep into our pockets and collectively make one-time or multiple-time one dollar donations, we will surely reach the goal of repaying the debt incurred when the previous government signed on to an ill-conceived Chinese-funded mega project that would bring no benefit to Myanmar nationals.

Recent history has shown that we can come together with strength in times of great national need. When Cyclone Nargis struck in 2008, ravaging the delta region, the Metta Development Foundation was deeply involved in post-tsunami relief work there, and witnessed how the hills people – Kachin, Shan, PaO, Kayah – responded collectively and instantly, rushing to the Irrawaddy Delta to help rebuild the devastated region in tandem with other lowland Myanmar communities.

I believe if we are resolute and united, the Myitsone Dam construction can be stopped. It will never go ahead. We must not give in to threats nor show signs of weakness in resolve. Otherwise forces intent on exploiting the Irrawaddy and doing perpetual harm to our country will prevail.

To give you a sense of how strongly feelings against the Myitsone Dam are in the heart of local Kachins, let me share a story about a neighbor of mine at Alam, the village midway between Myitkyina and Myitsone. On the evening of 6th February she came to my house with two chickens under her arms, asking me to take them for 13,000 kyats (about 8 US dollars). She said she urgently needed some cash for transportation to join the public demonstration against the Myitsone Dam planned the next day at 8 am at the Manau festival compound in Myiktyina. She felt she should go and show her solidarity with those opposing the dam, no matter what her financial situation.

My neighbor is a widow, eking out a meager living from the land. A while ago her son had gone to China in search of job opportunities. The border police arrested the group of job seekers he was with, stripped them of their clothes and belongings and pushed them back to the Myanmar side of the border. The mother had to sell part of her land to pay a middle man to bring her son home. In spite of all this, I know for sure that my neighbor, and others like her, would happily pay a dollar per month until we are home free of the Myitsone debt.

Buying back the Myitsone debt can also be seen as a symbolic act of buying back peace. The anger, the discontent, the pent up feelings of exploitation and injustice stemming in part from heavy handed, unilateral projects like the Myitsone Dam that benefit only non-Kachins, have given rise to armed conflict in the Kachin area. A nation-wide effort to put a stop to a project universally opposed by the Kachin could be construed as an act of solidarity, a show of empathy for the suffering of the Kachin, and can ultimately lead to national healing.

It is also a lending of ears to the voices of those forced to flee the Triangle Area north of the Irrawaddy confluence. When the threat of the Myitsone Dam is removed, they can return to their homes in the highlands, instead of languishing in crowded lowland IDPs camps. It would also eliminate the ominous choice the Chinese ambassador made Kachin church leaders take during his visit to Myitkyina: to support Myitsone Dam construction or risk losing aid for the safe return of IDPs.

The Myitsone Dam was halted in 2011 due to intense public pressure. We need to keep up the pressure, and consistently say “NO” with a united voice. Launching a public fundraising campaign to repay what is “owed” to the China Power Investment Corporation is a good way of reclaiming our beloved Irrawaddy, as well as salvaging our dignity and sovereignty.