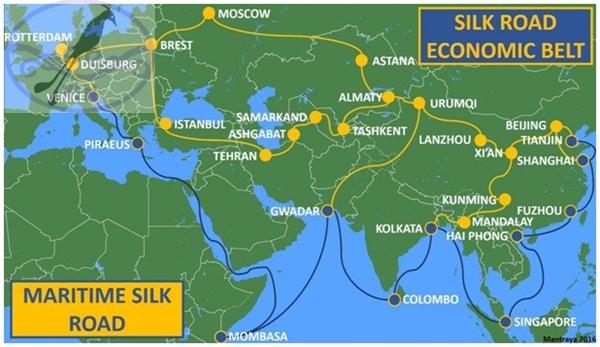 A Memorandum of Understanding to establish the China Myanmar Economic Corridor (CMEC) was signed by the governments of Myanmar and China in September 2018. The CMEC forms part of China’s Belt and Road Initiative (BRI), a 21st century reimagining of the ancient Silk Road, the network of land and sea trade routes that once linked Imperial China with markets in the west.

The Chinese posit BRI as “a bid to enhance regional connectivity and embrace a brighter future”, but there are many who perceive it as nothing more than a form of neocolonialism, a thinly veiled attempt at gaining dominance on the world stage. The very act of rebranding the initiative Belt and Road, taking the word “One” out of its original name, is seen as an attempt to address this negative impression.

In Myanmar, official estimates are that CMEC will be implemented before 2020. At first glance, the time frame does not sound too auspicious, given that the Corridor passes through ethnic areas rife with armed conflict, and the peace process remains at an impasse. But the Tatmadaw or Burma Army’s 21 December declaration of a unilateral ceasefire in regional commands which encompass major CMEC project areas is a clear indication that China is going to great lengths to secure that flank.

The security situation may likely be improved, but hastily expanding connectivity without addressing the ethnic, religious and social cleavages that plague the project areas risks exacerbating existing conflicts. This is especially true in extremely sensitive ethnic conflict areas like Kachin State.

A clear mechanism needs to be put in place for resource sharing and evaluation of social and environmental impacts before implementing national level projects. Unless such steps are taken, the trust deficit in China-backed economic ventures will only intensify. China also stands to lose credibility as an honest mediator in the peace process. One only has to hark back to the case of the stalled Myitsone Dam to drive home this point, when in 2011, construction of the Chinese financed mega-watt dam had to be halted due to public pressure.

The exclusion of community perspectives in CMEC planning is cause for major concern. In China itself, platforms for civil society engagement around Belt and Road have been established, including action plans for Chinese social organizations to promote BRI. However, such platforms are not extended to individual partner countries such as Myanmar, with the result that civil society involvement in the planning process is non-existent.

Projects in ethnic controlled areas in Myanmar are being hastily implemented, solely through negotiation between the Chinese and the NLD governments without any consultation with the ethnic nationals that populate the project corridor. For instance, projects to be implemented in Kachin State and Mandalay Division have been touted as CMEC related, but local communities have no idea yet how they fit into the CMEC framework.

There is no doubt that a storm is brewing. CMEC is looming over us like a black, threatening mass of cloud, further aggravating the raging political storm of unresolved political grievances and environmental degradation that envelop us. This is the harsh reality that we Kachins face with the advent of CMEC. And like it or not, we must face it and its resultant effects.

As things stand now, it would seem that we are caught between the devil and the deep sea, with not many good options in sight. The question facing us now is whether it would be more pragmatic to cast our lot with China and its Belt Road Initiative rather than the transformation process under Myanmar rule, and the non-negotiable centralized “Peace Process”?

We have been through 70 long years of an unending cycle of armed conflict, rights violation, military aggression, displacement, poverty, trafficking, ceasefires and resettlement and before you know it the cycle starts anew all over again. The fact of the matter is that after having gone through the era of military encroachment, we are now facing another type of encroachment – the Chinese kind, which in its own way is equally frightening. As it is, we do not have the choice of opting for the Devil or the Deep Blue Sea, but will have to face both of them head on.

Some Kachin civil and business leaders are of the opinion that to survive this storm without losing our identity and livelihood, we need to ride out the storm in its eye, being that the most tranquil place during a storm is at its center – the eye of the storm. The reasoning behind this is that the Kachin as an ethnic group, is weak and negligibly small in number. Thus it would be more advantageous to adopt a multi-alignment policy, taking care to get along with both powers, avoiding confrontational behavior, constructing a harmonious society, and discerning the best means that would yield mutual benefit for all stake holders.

But the problem with this concept is: How do we insert ourselves into a process that both powers have excluded us from? Thus far, we have not been given any opportunity to give any kind of input at any level in the CMEC process. So what course can we take to avoid getting undercut, and escape the fate of numerous other communities who have suffered negatively from the impact of Chinese “development” projects.

A classic example would be the multi-billion dollar Kyauk Pyu Special Economic Zone, with its deep seaport project at Maday Island, and the gas pipeline project at Kyauk Pyu, in Rakhine State. The local populations who had high hopes of a brighter future with better job opportunities have had their dreams dashed, hit with massive land grabs, destruction of local fishing grounds, and arrests and incarceration for protesting against unlawful land grabs. The situation has become so untenable that Rakhine political parties and civic groups are now calling for an end to BRI related mega projects rushed through without consultation with the local people.

Chinese academic Yuen Yuen Ang writes that BRI needs a roadmap – that the initiative, like most communist party campaigns, is sprawling and uncoordinated. She adds that the Initiative is a vision, not a plan. To me, it sounds eerily like the “vision” Aung San had for the Union of Burma. Panglong was a tool to gain a quick and easy independence from the British – rather than a pragmatic plan for a Union where diverse ethnic groups could live together. The result is that after 70 years of independence, many of the non-Myanmar are becoming convinced that the last thing on the Myanmar agenda is a Union with other ethnic groups, either before or now.

A close look at the entire CMEC working committee will show that there are no ethnic nationalities represented on the committee other than the Myanmar. The names of individuals on the committee have not yet been made public, but all of the organizations seem to represent only military and NLD interests. Hopefully CMEC planners will pause and ponder on the negative impact of putting into operation yet another investment venture, negotiating only with the ruling party and the military.
What is most critical at this point is unity, with all stakeholders striving to bring about lasting change to our country. The Ethnic Armed Organizations (EAOs), the political parties, the Civil Society Organizations (CSOs) must all participate as partners, together with the Chinese and NLD governments in CMEC negotiations. We must learn to ride out of the eye of this powerful challenge if we are to maintain our independence as a nation. That is the challenge for all of us.

Likewise with regard to the peace process, the EAOs, CSOs and political parties must prove themselves capable of cooperation within a federal structure – to cooperate with the ethnic majority Myanmar. If we are not able to rise above the situation, we will be in danger of becoming irrelevant minorities in our own land much like the Uighurs of Xinjiang, enduring the Myanmar army’s continued attack of ethnic armed groups, labelling them separatists and terrorists.

The ruling Myanmar elites on the other hand, must be convinced that the ethnic armies are not “rebels” in the sense of putschists and enemies, but that they are potential brothers with the same goals: a stable and productive State.

We also look to our giant neighbor China – the neighbor with a vested interest in seeing a peaceful Myanmar, and has experience with a one country, two/three policy, to provide us with long term sustainable support in matters like the sharing of natural resources, the right to self-determination and the creation of a fair platform to negotiate with the Myanmar government in resolving underlying political issues. It would be a dream come true if the NCA process were to be completed and democratic reforms get back on track by 2020.

Unless such steps are taken, there is a real danger that China’s economic initiative in Myanmar will fail, and democracy will continue to elude the country, with no possibility in sight of reviving the Union Spirit.

All the causes of issues big or small that have arisen now and then lie on the hasty stupid decision stemmed from neglecting to people who are needed to count on. The present two governments in Burma (one is a puppet and the other is the one who is pulling the string of the puppet) do not give a damn on the people. They should realize people are the force to elect a government and they are also a force that can depose the government by revolution.