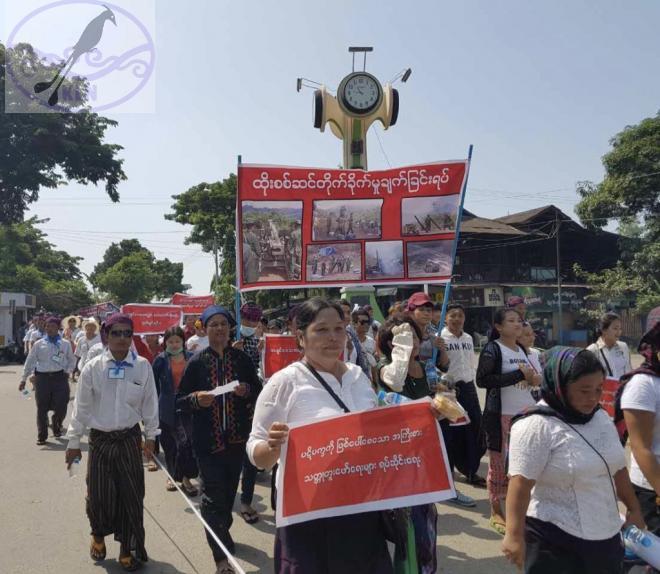 The words of Archbishop Oscar Romero are as poignant today as when first spoken in 1978. Faith does not mean shying away or hiding from the challenges of the world. It means being responsive, compassionate and understanding in the front-line challenges of human life. It is thus a wonderful opportunity for inter-faith dialogue that the Advisory Forum has provided by organising for us all to join together in this forum.

I am a Kachin woman from northern Myanmar and was raised as a Christian, as are many Kachin people. Like all co-founders of the Union, the hope of the Kachin people is always for peace and justice. This sentiment for peace and justice was strong in the 1947 Panglong Agreement, again during the transition to independence, and even when armed struggle became prolonged between different forces within the country. The Kachin people always believed that, eventually, there would be a peaceful resolution by political means, which would include all nationalities and faiths within the Union.

With that hope, the Metta Development Foundation was founded following the Kachin ceasefire of the early 1990s. In the following years, we assisted communities to rebuild their lives, while waiting for a legitimate civilian government to emerge that will address the long-standing need for a meaningful political dialogue. The bitter experiences from our past highlight that these conditions of inclusion and stability are essential to bring about lasting peace.

This is why the Metta Development Foundation initially began working in areas where ceasefire agreements had been reached with the government in the Kachin and Shan States. Subsequently, Metta’s work spread into other parts of the country where many communities share the same vision and goals. These ideals are upheld by the different faith and civil society groups working in similar fields. Humanitarian needs are great. But the underlying objective is for communities to complement the peace process while waiting for the government and ethnic nationality groups to engage in political dialogue. No nationality group or region of the country should be left outside this process. In Kachin State alone, we facilitated rehabilitation efforts in over 250 war-affected communities with this hope always in mind.

Sad to say, then, that in June 2011 armed conflict resumed in the Kachin State after 17 years of ceasefire. Since this time, more than half the communities that Metta supported have been razed to the ground. Meanwhile conflict has resumed among our neighbours in the east and west of the country, including Kokang, Palaung, Rakhine, Shan, Christian and Muslim communities. For all who truly support inter-ethnic and inter-faith harmony, it is a tragedy of truly immeasurable proportions.

The scale of these setbacks highlights the fact that, for those of us who are social workers, it is not enough to concentrate on the provision of daily basic needs for the people alone. We must also strive to enable that the civilians themselves become part of the transformation process. There must be political solutions so that the peoples are equally represented and consulted on all social and political issues that affect their lives. I am thus proud to say that, even during their displacement, many of the affected communities in northeast Myanmar sought to vote in the 2015 general election. Even amidst conflict, they wanted their voices to be legitimately heard.

On that note, it is important to highlight the lack of health and economic outreach to these remote borderlands, whether ceasefire areas or not. In these regions, many communities barely live at subsistence level, fueling discontent and local grievance. Since independence in 1948, the succession of central governments has completely ignored such a basic reality that needs to be addressed.

This does not mean that community life has come to an end in the face of such hardships. The northern Triangle area in Kachin State is one of the most biodiverse regions in the world, but it is also an area of poverty and neglect. Here the Christian churches have reached out with volunteer teachers, mobile health backpacker medics and other social programmes. Their commitment and presence continue until today, and only recently a teacher died while being carried out to receive needed health care. But this personal sacrifice only demonstrates the scale of the challenges. Many preventable and treatable diseases remain widespread in the northern borderlands. Leprosy also exists in the Triangle area, while 65 children died of measles in a recent epidemic in the Naga region – and this is not to mention the continuing crises in malaria, HIV and TB.

All of us who are committed to progress in our country need to take urgent notice of these sufferings. Throughout the developing world, children die because they are born in the wrong place – not of exotic, incurable diseases, but because of commonplace childhood illnesses that we have known how to treat for almost a century. In Myanmar, however, these children will continue to die until peace and an inclusive system of state governance are developed that is capable of delivering routine maternal and child health care to all peoples.

It is again sad to point out that it is not only in the health field that many nationality peoples feel marginalised. Over the years, restrictions on local cultures and languages have only furthered alienation from the national authorities. Even today, for example, children are not allowed to sit for government exams who come from areas where the Nationwide Ceasefire Agreement has not been signed. As a result, another generation of young people feel discriminated against within the country. Such examples highlight that inequality is not simply about conflict, as is often believed, but it can also be caused by the structural violence generated by weak and absent state policies and financing. In short, the patterns of inequality within our country are not because of war but reflect the long-standing failures of state that have always needed to be addressed by reform.

Looking to the future, it is vital that this legacy of under-achievement and challenges of reform are discussed in meaningful dialogue. All of us can play a role: political parties, civil society organisations, faith-based groups and also those who hold arms, which is a particular feature of political life in our country. Without such inclusion, the cycle of division and violence is only likely to continue.

Equally concerning, as the pace of national transformation accelerates, a new generation of grievances will develop among marginalised peoples and communities that feel left outside. But it does not need to be like this. New problems only arise because of the inequalities that are present in society and the conflicts that continue in the field. But when these day-to-day issues are resolved at the grass-roots level, then this complements the national peace process, supporting the finding of solutions at the top.

In the meantime, there are many ways to support these goals. Concentration, for example, can be given to education, health outreach, women’s empowerment, child protection, livelihoods and youth opportunity, all of which are intertwined, interdependent and interconnected. A just land law is also required, and the peoples and farmers must be able to take part and advise in the process of enacting laws. When we seek equality, a just citizenship law is also essential. Each of these issues strengthens the fabric of society and the ability to break the cycle of violence, supporting the road to peace.

In conclusion, I want to emphasize it is only because of the faith of the peoples that so much division and suffering has been survived during these long years. It is their voices that we need to remember. As religious, social and political leaders, the onus is on us to pave the way for change, overcoming the inequalities in society, and fulfil the hopes of those who cannot take part in discussions for now. And there must also be self-reflection and humility. Dialogue is a process that continues through life and must include all peoples and communities in our society. With its great human and cultural potential, our country should be a model for compassionate and progressive inter-change, not an example of division and denial. Learning from the lessons of the past, there is much that we must seek to achieve.

This commentary is an English language version of a presentation that Lahpai Seng Raw delivered on “Equal Rights and Responsibilities for All Ethnic and Minority Groups” at the conference, “National Reconciliation and the Advancement of Peace in Myanmar”, organised by the Religions for Peace Advisory Forum in Nay Pyi Taw on 21-22 November 2018. The conference was attended by representatives of the Myanmar government, national armed forces, parliament, ethnic armed organisations and local non-governmental organisations. Speakers included State Counsellor Daw Aung San Suu Kyi, Karen National Union Chairperson General Saw Mutu Say Poe, and Roman Catholic Archdiocese of Yangon Cardinal Charles Bo.

Lahpai Seng Raw is a 2013 Ramon Magsaysay Award winner and co-founder of the Metta Development Foundation and Airavati. She was also a delegate at the 21st Century Panglong Conferences in 2016, 2017 and 2018.

This commentary was first published by the Transnational Institute (TNI) on Nov 27, 2018.

A Distortion of Ethnic Identity

Photo: The 2020/21 prescribed Geography text book for the Seventh Standard U Pan Yee’s Kyunnoke Doh Taingpyi (Our Country) was the school text book on Geography that raised the ire of Kachins far and wide for its demeaning portrayal of the Kachin and Chin as hill tribes people who resort to thievery to escape starvation. […]

Photo: Kachin Leaders with the Frontier Areas Committee of Enquiry (FACE); Maymyo, April 1947. (Illustrated London News) I had the privilege of close personal encounters with Bogyoke Aung San on three separate occasions. All of the meetings were unscheduled but nonetheless significant, as they took place in the crucial pre-independence years of our nation, and provide […]

Liveth there a Judsonian with a soul so dead, Who never to himself hath said, This is my own, my Alma Mater. It was the first morning of the first week of June 1929, the official opening day of the new term at Judson College. Approximately 800 students were gathered at the assembly hall of […]

When official recognition of schools in non-government areas in Kachin and Northern Shan States was withdrawn in the aftermath of the renewed Kachin war of 2011, students from these areas, most of whom are internally displaced, found themselves no longer eligible to take government regulated matriculation exams. This meant that they were deprived of opportunities to pursue […]

Photo: The great Padang Manau at Sinlum Kaba March 1945 (CC Naw Ja) Clan oral history has it that Duwa Zau Bawm was the Gauri Lahpai chief who founded Sinlum Kaba, one of the many villages that dotted the Sinlum hills overlooking Yunan, China. The Sinlum hills were part of the domain of the Lahpai Gauri […]