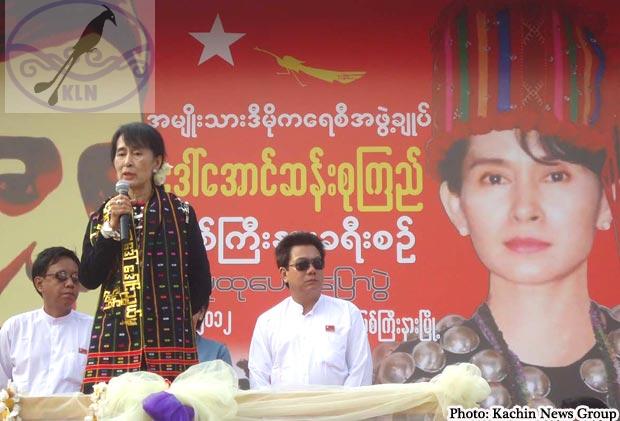 During its election campaigns, the NLD launched its 2015 election manifesto stressing on what NLD yelled ‘change’ with four principles, namely (1) ethnic affairs and internal peace, (2) a constitution that ensures that all the people of our country can live together in tranquility and security, (3) a system of government that will fairly and justly defend the people, and (4) the freedom and security. In fact, the manifesto engendered the public including ethnic people across states overwhelmingly influenced to vote NLD.

Aung San Suu Kyi-led NLD government took office on 1 April 2016 as a result of winning 2015 election by landslide. Once NLD government had taken office, the NLD managed to appoint Aung San Suu Kyi for a state counselor position so as to make her take a leading role the government. However, with 2008 constitution, the military (Tatmadaw) holds the political power that the military constituents have taken 25 per cent seats in the parliament without election. On the other hand, the constitution specifies the portfolios of defense, home and border affairs filled with Tatmadaw officers recommended by the Commander-in-Chief. Tatmadaw even can declare an emergency and take over the entire government. NLD’s change manifesto implied that Aung San Suu Kyi and her NLD colleagues would challenge the undemocratic position that Tatmadaw occupies the political power through 2008 constitution.

Nevertheless, it has already been half of its term that Aung San Suu Kyi-led NLD government has been given chances to demonstrate its genuine political will for change. Considering the manifesto as the rule of thumb, it has now been consistent to look at whether the NLD government has attempted at least a change engagement toward Tatmadaw because a big elephant (Tatmadaw) occupies the political room playing as an enormously dominant role.

In fact, Tatmadaw has monopolized and exploited the country’s economy for decades. Current generals, ex-generals and their partners called cronies have run the co-operations and companies including joint ventures across the country. In another words, the dictator Ne Win and Tatmadaw have never been open for transparent and accountable economy to the citizens since 1961. Despite the fact that the country has gone through its transition with former quasi-democratic government led by president Thein Sein the former ex-general for five years, the economic monopoly and exploitation adversely remained unchanged. In 2016, Obama administration lifted all remaining sanctions against Myanmar seeking to reward the country’s recent moves toward democracy. The US’s lifting sanctions in favor of Aung San Suu Kyi-led government only benefited to the Tatmadaw and its internal partners rather than the citizens. Therefore, this change engagement by Aung San Suu Kyi prioritized for Tatmadaw that sherepeatedly expressed her sympathy towards Tatmadaw as “my father’s Tatmadaw” rather than all citizens of country.

It is ironic that Aung San Suu Kyi repeatedly encouraged the ethnic armed organizations (EAOs) to sign Nationwide Ceasefire Agreement (NCA) and carried out the Union Peace Conference as the opening ceremony with the entitlement of Union Peace Conference – 21 Century Panglong that Thein Sein already held the opening ceremony right before he left the office. In fact, Aung San Suu Kyionce mentioned that the EAOs those involved in the peace process should seriously ponder before signing the NCA whether to sign during Thein Sein’s administration.

Along with peace negotiation process and even during Union Peace Conference – 21 Century Panglong, Tatmadaw continued to launch its intense attacks in Kachin and northern Shan states. The attacks including non-discrimination attacks over civilians caused local Kachin causalities and directly contributed to displacement of more than 6, 000 Kachin people. The delivery of human aid is increasing being blocked by breaching international humanitarian law (IHL) 55. The fighting has displaced approximately over 100, 000 local people particularly the ethnic Kachin, Palaung, Shan, Kokang and many others. It was reported that Tatmadaw has committed grave human right violations such as extrajudicial killings, rape, burning houses, torture, pillaging, and the like across its military operated areas in both Kachinand northern Shan states.

Likewise, in response to coordinated attacks on security forces out posts in northern Rakhine state by the Arakan RohingyaSalvation Army (ARSA) on August 25 2017, Tatmadaw launched a large-scale military operation against the Rohingya Muslim population. The operation committed massacres, widespread rape, and arbitrary detention. Satellite imagery showed that more than 340 primarily Rohingya villages were completely destroyed. More than 700, 000 Rohingya have fled to neighboring Bangladesh to escape mass killings, sexual violence and other abuses amounting to crimes against humanity. As a result, in terms of humanitarian issues, about 241,000 displaced people – of which 77 per cent are women and children – remain in camps or camp-like situations in Kachin, Shan and Rakhine states.

Dr. Win Myat Aye, Union Minister for Social Welfare, Relief and Resettlement, addressed that the prolonged existence of displaced persons camps was not desirable and plans have drawn up to close them. There are more than 140 displaced persons camps, with a total population of more than 160,000 in 15 townships in four states. The NLD government began its work to close down the IDPs camps starting in May 2016 during the term of the incumbent government. It is very astonishing that the NLD government, the so-called civilian government, was not transparent about its national plan to close down IDPs camps although the plan was begun since 2016. With the most serious issue over the closure of IDPs camps, it was to violate the non-refoulement because it is the principle of international humanitarian laws (IHL) for the victims of both international and non-international armed conflicts. For instance, non-refoulement can be addressed in the Convention (IV) Relative to the Protection of Civilian Persons in Time of War (Geneva, 12 August 1949), to which Myanmar is a state party. The principle of non-refoulement is not to push any victim into any tentative dangers; instead it has to protect the victims from subjected persecutions.

In fact, Aung San Suu Kyi, the iconic leader of Myanmar’s opposition party NLD used to be championed as the voice of the people. However, on the matter of the Rohingya’s persecution she has been notably silent. The International Criminal Court (ICC) has recently released its jurisdiction over alleged deportation of Rohingya. Likewise, she has never raised her voices over the humanitarian issues in both Kachin and northern Shan states. As a matter of fact, Aung San Suu Kyi should have raised on these issues at least as the humanitarian concerns even if she needed a positive engagement with Tatmadaw. In this case, the silence of Aung San Suu Kyi has paid the worrisome attention towards Tatmadaw rather than the citizens that she used to address her concerns before she held the power.

It is absolutely true as an activist once expressed: “I have now accepted that Aung San Suu Kyi is a power seeker rather than a transformational leader”. The evidences have shown that the change engagement that Aung San Suu Kyi-led government has been contrasting with what the NLD declared for change as its election manifesto during its political campaigns and the change engagements have been prone to Tatmadaw instead. In short, the Aung San Suu Kyi-led NLD government needs to answer the reason why her administration has been barking the wrong tree.