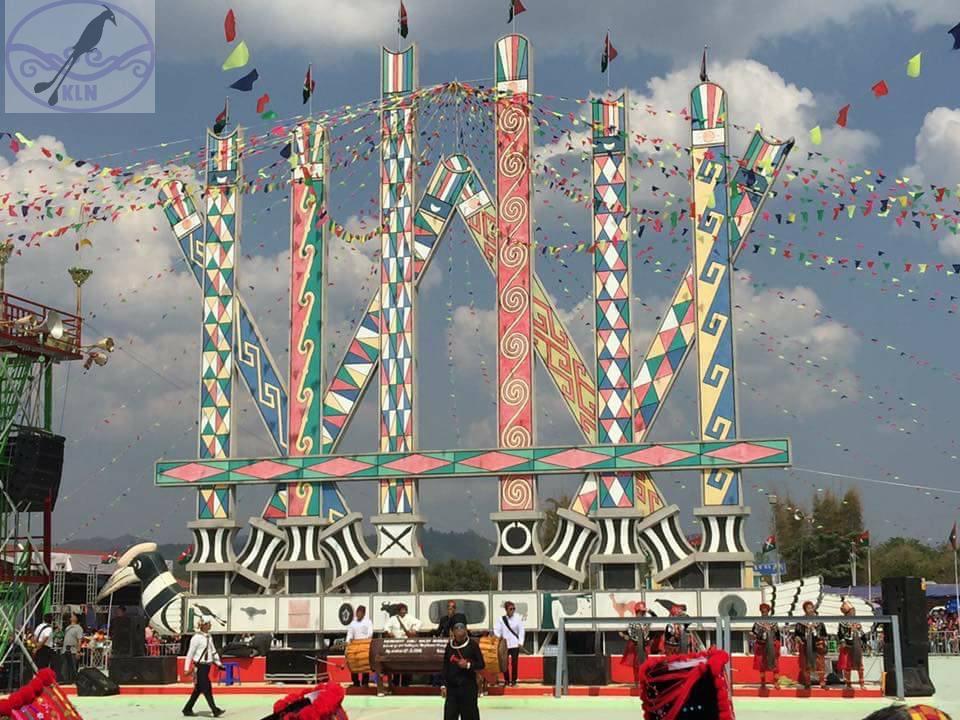 According to Kachin mythology, the original dancing of the manau was first performed by nats, or spirits, and birds were afterwards invited to participate in the dance. But legend also has it that it was the birds that developed the artistic expression of dance which man later emulated and gave the name manau, literally meaning “milling around”.

Manau is a communal dance form deeply rooted in animist culture and its enactment reflects both social and religious sentiments. Being a communal event, only a chief or collective leadership could summon the people for such a gathering.

In olden days, the Jaiwa, or prophet of the highest religious authority, would be required to officiate. Given its social and religious significance, a manau is always a major undertaking.

Preparation usually takes months, gathering rice, livestock, and liquor for the festivities. Every villager volunteers in creating the dance floor and designing and erecting the ceremonial manau pillars. This has always been a labor of love and the greater the manau, the more elaborate and intensive the preparations. A grand manau could last a marathon stretch of 8 days and financial costs naturally run very high despite the outpouring of contributions from guests.

Traditionally there are 8 types of manau. While the general dance pattern is similar, the meaning, mood, and message are quite distinct one from the other.

This is a burial dance, performed to mark the occasion of a paramount chief’s death sometime after his funeral. Its purpose is to gain favors for the remaining family members. High cost is involved, and only chiefs of considerable wealth can afford such a manau.

Sut Manau is a celebration of prosperity – a thanksgiving festival. In its original animist setting, it is performed to appeal to the nats for further favors of wealth and fortune. The Sut Manau is now commonly performed and festivities last for 4 or more days, depending on the generosity of the host. It is also customary for the host to present invited guests with gifts.

The Padang Manau is a victory dance. This is a popularly celebrated manau, from the tribal wars of antiquity to the modern day. Even in the absence of wars, it can be staged as a celebration of past military glories. Interestingly, it is also the most colorful of all the manaus.

This is a precursor to the Padang Manau, and is in essence a preparation for war. This manau calls for the assembly of heroes in full armament. It is an upbeat manau, aimed at boosting the morale of the fighting men. With the passage of time, this type of manau has become a rarity.

The Kumran Manau is associated with the rekindling of kinship ties among clan and family members separated through geographical distance. Hence it is a social manau. It is also celebrated when part of the extended family prepares to migrate to another region.

In olden days, this was a celebration of the homestead. Its modern equivalent would be the house warming celebration. Again like any other manau, the scale of celebration depends on the largesse of the host.

The Htingram Manau can be interpreted as a reconciliation manau, bringing together in-laws, rival siblings, etc., who have fallen out with one another for some reason or another. Usually, it is the chief or elders who help sponsor this manau, to reestablish ties of unity and harmony within the family unit.

This manau is generally associated with a predisposition to relaxation and leisure. In the past, it was celebrated at a time of rest, taking time off to laud select spirits for the petitioning of favors. In wartime, this manau is observed as a time of reflection before warriors go off to war.

Gustaf A Sword, The Kachins of Burma, reedited by Ruth M. Armstrong (Bloomington, IN: Eastern Press, 1997)

This article was first published in the book “Through Kachin Lenses”