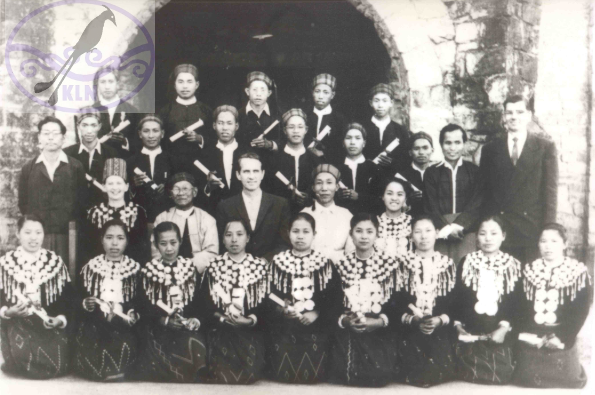 Translated excerpt from “A History of the Kachin Bible School”

The BBC annual general meeting was held in October 1930, at the Cushing School compound. The Kachin delegates duly presented the request for a Kachin Bible school to the Executive Committee. But their proposal was rejected, with the rationale that the Kachins do not yet need a Bible school of their own, as they can easily attend Bible schools conducted in the Burmese language.

It was then that one of the Kachin delegates, the Pangmu Duwa Rev. Lahpai Zau Tu stood up, and in a strong, commanding voice, gave the following rebuttal:

• We Kachins are not comfortable preaching in Kachin when the training we receive is in Burmese. To more effectively minister in Kachin, we need to receive training in our own Kachin language. Give us a Bible school where we Kachins are taught in our own language.
• The Burmans and Karens are already receiving training and preaching in their own languages. They also have been granted an abundance of fine looking homes, buildings and other facilities, even to the point of surpassing their ability to utilize them.
• How many years have it been since the Burmans received the word of God? It is only recently that we Kachins have come to know the good news. But you can look at the number of believers, and compare the results.
We Kachins hunger for the word of God with such impatience and fervor that we are ready to grab and gulp it down raw. For us, a Bible school in the Kachin language is a must. So I would ask you not to drag your feet about giving us a Bible school.
• Also, it would be against God’s will if you refuse a Bible school for the Kachins. You missionaries, you have crossed vast expanses of water to come to this land to spread God’s word. If you, yourselves, discriminate against us hill peoples, your actions will go against God’s will.
• If we look at this big city of Rangoon, we see a reluctant population being force-fed, even to the point of regurgitation. If you are so intent on feeding those who are averse to your efforts, why not for a change, feed those of us who desperately hunger and thirst for God’s word?

As Rev. Zau Tu thus expounded, hammering home his arguments point after point, he became increasingly impassioned, and his companion DIS Robin tugged at his jacket and said, “Zau, you are being too sharp tongued!” Rev. Zau Tu turned to his compatriot and said: “What, you too? Are you on their side or with me?”

At this juncture, the missionaries said, “Zau Tu, we understand what you are trying to say. Let us put an end to the meeting here and now.” The general meeting adjourned, and that night, the missionary group met on their own.

Rev. Zau Tu could not sleep the whole night, spending much of it in prayer. He was sitting by himself early the next morning, when he heard a knock on the door. It was Mama Smith calling out his name. Zau Tu at once answered in a loud voice, “Yes, Mama!” and opened the door. Mama Smith, then told him that the Executive Committee had met the night before to discuss the Kachin proposal, and that as she understood it, had agreed to a Bible school for the Kachins.

Sara Zau Tu jubilantly cried out: Ara Le! (Jinghpaw equivalent for Hallelujah!) God Himself has made it come true!”

It should be remembered that it was only through the strong, persistent pleas of our elders that a Bible school in our own language, Kachin, came into being.