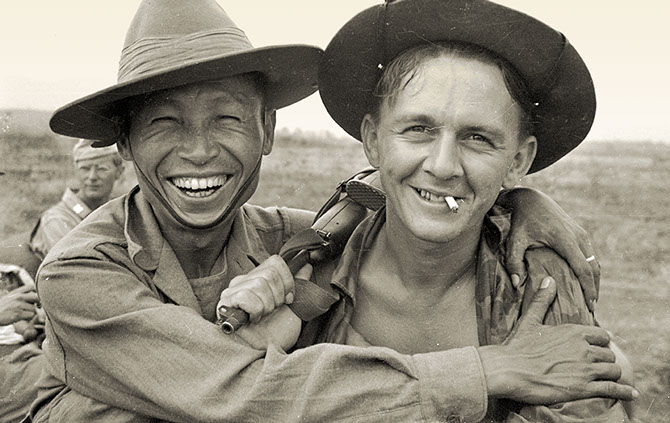 (Edited and translated from the original in Burmese)

As a Captain (King’s Commissioned Officer) in the Burma Rifles, I was evacuated with other military officers and essential staff when the Japanese invaded Burma in early 1942, and the British had to make a hasty retreat to India. In India, Kachin and Karen military evacuees like me were regrouped under the newly formed 2nd Burma Rifles.

General Wingate’s special forces, the Chindits, were to be at the vanguard of British reentry into Burma. Wingate’s strategy was to have 8 columns of Chindits – 6 British and 2 Gurkha – with those of us from the 2nd Burma Rifles attached to each column as translators and scouts. After a 3-month training, we were sent back into Burma in December 1943, to establish intelligence networks behind enemy lines.

Wingate’s Chindits entered Burma in January of 1944, crossing the Chindwin River near Homalin, and then on to the eastern side of the Irrawaddy River after crossing the Rangoon-Mandalay railway lines. The Chindits’ guerilla attacks met with some successes initially, but by April, found themselves unable to withstand the Japanese onslaught. And so Wingate made the decision to withdraw the majority of the Chindit columns back to India.

Gen Wingate then asked me to take command of the 50 Kachin soldiers attached to Column 8, east of the Chindwin. We became part of a small intelligence gathering unit dubbed the Dah force. We were sent to the hills east of Bhamo, in close proximity to the border with China, to:

In order to closely study the situation on the ground, we set up a secret hideout near Munghka Pa village in the Sinlum Hills, about a mile from the Chinese border. We moved about stealthily in mufti at all hours of the day. We were able to make contact with Capt. Mungga Tu of the Burma Signals Corps, and held secret meetings with elders from surrounding villagers at his house. We rallied the village elders by relating to them the many atrocities the Japanese had committed against the Kachin.

We told them of how the Japanese herded several Kachins into a house in Hugawng Valley, poured gasoline on the house, and set it afire. They then shot and killed anyone who tried to escape. This arson type atrocity was repeated in Bhamo District, on the west back of the Irrawaddy. This time, a young boy escaped and lived to tell the horrific tale. We also told them of how the wife of the Shangtai Duwa was raped in front of her husband, made to witness her husband’s throat being slit with a knife, before being killed herself. This happened at Balawng Kawng, near Mungkha Pa.

The villagers were so enraged by what they heard that they asked us for whatever arms available to fight the Japanese. I told them to spread news of the Japanese atrocities and rally others to the war effort, and to provide whatever support they could when the Allied forces arrive to drive out the Japanese.

I then asked 40 of the Dah soldiers to return to their villages and remain under cover, while I took the remaining 10 with me on a trek to Putao. It took us 23 days of footslogging through deep forests, hills and dales to reach this northern most town in Burma. From there we were evacuated by air to India, where I reported to Gen Wingate at Chindit HQ.

I was asked to give a report on how the Kachin Levies had been able to stave off Japanese entry into the Putao area. After that I was assigned to the Air Photographic Unit as a target pointer, and transported to Assam by a US Air Force plane. My job was to pinpoint important towns and strategic locations along the motor road from Rangoon to Myitkyina, the railway lines from Rangoon to Myitkyina/ Lashio, and the waterways from Bassein to Myitkyina.

The aerial photographic project was carried out from a B25 Bomber. During that time, I found myself flying over Burma during the day and then be back at the US airbase on the Indian border by evening almost daily. There was one horrific moment when our plane came under heavy attack from Japanese fighter planes.

In the evenings, I had the opportunity to socialize with high ranking US army officials of OSS Detachment 101 like Gen. Peers and Gen. Bill Donovan at the Officers’ Mess. They were delighted to make the acquaintance of a Kachin, who happened to be a King’s Commissioned Officer, and expressed warm feelings for the Kachins for their part in rescuing downed US pilots.

After my stint as target pointer, I was sent back to Burma to wage guerilla warfare against the Japanese and prevent them from coming up to Myitkyina via Bhamo or South-east Myitkyina Districts. We set up a hideout near Nahpaw, somewhere between Myitkyina and Bhamo, and staged “hit and run” attacks on the Japanese. After about 2 months, I was airlifted back to India.

Within a month of my being back in India, Gen Wingate attached 50 of us from the Dah force to US Detachment 101 to conduct a joint offensive against the Japanese. The rest of the force was sent back to rejoin the 2nd Burma Rifles. I then flew to Nazira in Assam in a light plane, to ask Detachment 101 for arms for 2,000 Kachin fighters. The arms request was approved, to be accomplished through nightly air drops of a great variety of arms in the Munghka Pa area.

I was back in Munghka Pa by September 1944. There, I was able to recruit 5,000 Kachins within 3 months with the help of Capt. Mungga Tu. Thus a new fighting force – the Kachin Rangers was born. At first, only 2,000 of them were armed, but soon we were able to arm all 5,000 of them, and form 5 battalions of Kachin Rangers, 1,000 men each in each battalion. We then made the move to Sinlum town, and proceeded to chase out the Japanese from the Kachin hills.

From there, we gradually moved southwards, and by the first week of February 1945, were positioned within a 1-mile perimeter of Lashio town in Northern Shan States. We trained and armed an additional 1,000 new recruits, forming the 6th Kachin Ranger unit. We encircled Lashio, launched artillery attacks on the town, and prevented Japanese reinforcements from reaching the town. This enabled a combined US – Chinese force to enter Lashio without encountering any resistance. The Kachin Rangers valiantly fought on until March 7, 1945, when they were able to hand over the territory they had liberated – all of Upper Burma from Meiktila northwards – to the Allied forces.

The Kachin Rangers were then asked to regroup at Sinlum by March 23. A big victory manau (the Padang Manau) was celebrated from March 24-26 at Sinlum to mark the rout of the Japanese from Upper Burma. The Kachin Rangers were officially disbanded on April 1, 1945. Some of the more outstanding warriors were recruited to join regular Kachin army units, while some were asked to join the Union Military Police (UMP) to help protect Myitkyina and Bhamo towns. The rest were discharged and sent back to their native areas.

Note: Capt. Lazum Tang, or Lazum Tang Gyi, went on to become a Brigadier General in the Burma Army after independence from the British. He was only 1 of 2 Kachin officers to have achieved this rank.