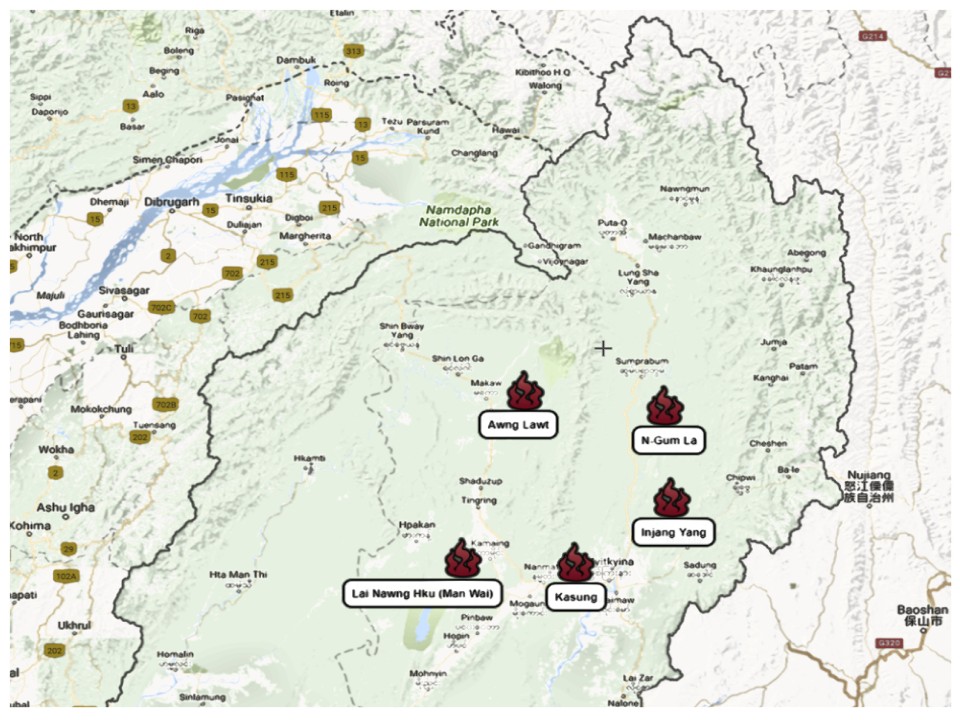 Intensified clashes between the BA and KIA forces in Danai, Hpakant, Myitkyina, Mogaung and Injang Yang townships starting April 11, 2018, have caused villagers in the thousands to flee from these frontline areas to safer destinations. However, their escape was blocked by BA troops, and they have been trapped en route in a no man’s land in forests nearby. The BA has thus far, thwarted attempts by churches and civil society leaders to rescue and bring the trapped villagers out to safety.

Statistically, about 160 of the trapped villagers are from the Kahtan Yang village tract, the Loi Nawng Hku (Man Wai) area in Kamaing township, and about 2000 are from Awng Lawt, Sut Ra and Sut Ring Yang villages in Danai township.

Awng Lawt, Sut Ra and Sut Ring Yang villagers had fled into the jungle and in danger of being caught in the crossfire of battles. Their food and medical supplies are now completely depleted. There is an urgent need to find secure places for them to take refuge and have their health and basic needs attended to.

The BA did issue an announcement that the villagers in Awng Lawt area could now safely return to the village, but the villagers are too afraid to return home. They say that so long as BA troops remain in their villages, they fear abuses and new outbreaks of hostilities occurring at any time, and the possibility of being drafted as guides or used as human shields.

The situation of these trapped villagers is extremely dire. The condition of heavily pregnant women, new born babies, and those with critical health problems is cause for great concern.

In addition to IDPs in Danai and Hpakant townships, about 1100 villagers from Kasung and Zup Mai villages in Myitkyina township had fled to Namti town in the third week of April and already settled in IDP camps set up by Catholic and Baptist churches.

In total, over 5000 villagers have been forcibly displaced from their homes in Kachin state in April alone.

A Kachin youth group, Kachin public youth demonstration movement, is holding protest and prayer vigil at the Myitkyina’s Shatapru Manau Ground demanding the rescue of civilians trapped in the armed conflict to secure and safe place, and the delivery of necessary humanitarian aids without hindrance.

It’s time to seriously consider the plight of the IDPs and Kachin communities around the world. More importantly, it’s time to consider the demands of the ethnic armed organizations and to find a lasting solution for the decades-long civil war in Burma.

You may want to contact Samaritan’s Purse, Catholic Medical Mission Board, Feed My Starving Children and other humanitarian organizations and inform them of the situation. The Kachin State conflict is not covered in the main stream media for the most part. If they are willing to help, see if there is a way they can bypass the Tatmadaw and still deliver aid. Dave Eubank with Free Burma Rangers would probably be helpful with bypassing the Tatmadaw and delivering the aid.