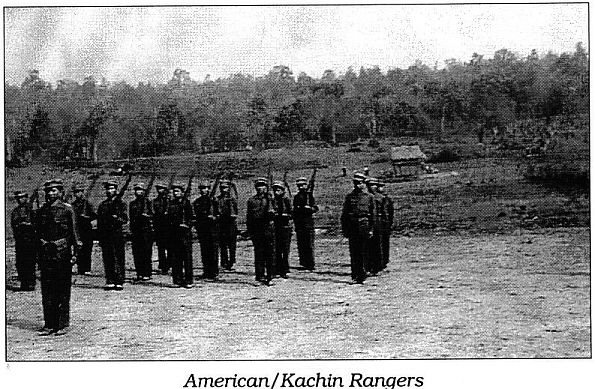 Since the few remaining months leading up to the end of 1948, the Karen Nation Union(KNU) troops had been fighting the HPSPL government. On July 3 in 1948, the KNU troops attacked the police station in Tahtong and took control of the town. The same year on August 31, the KNU and its armed wing KNDO formed the Kawthoole government in order to form a separate Karen country.

In 1948 on September 1, the Karen home guards seized Mawlamyaing. Immediately, they began attacking Htandabin, Hpyu and Tawngngu. In Tawngngu, the No.1 Karen troops joined hands with KNDO and the combined Karen troops overran Tawngngu on January 27 1949. They attacked Pathein the next day on January 28. Insein fell to Karen’s hand on February 2. Subsequently on February 5, Karen battalions based in Pyay revolted against the ruling government and took control of the town. All Karen battalion troops had now joined the rebellion and KNDO became a formidable force to reckon with.

While KNDO troops were conquering Taunggyi, another Karen leader U Hla Pe of Thahtong was recruiting Pa-o people from Shan state. In December 1949, the Pa-o founded their very own revolution army. While U Hla Pe was in charge of political affairs, Bo Chansung took charge of the military matters. By that time, the peoples of Shan state had also founded their own revolution armies. As for the CPB, from their Pyinmana and Yametin bases, they drew up plans and launched attacks on the central government troops.

Times were extremely hard for the HPSPL government, but the ruling government ordered troops under its control to crush the rebellions everywhere. But the more government troops were being deployed, the quicker the war spread.

While being stationed in Maymyo, in addition to his Captain salary, Naw Seng was also receiving the monthly stipend for the pivotal role he played during the anti-Japanese war. Furthermore, a small jeep and two transport trucks were provided to his family. His wife and children were living a comfortable life. But for Naw Seng, just a few  Kachin families being able to live the good life was not what he wanted to see.

At the military barracks among the 1st Kachin troops, Colonel Zaw Grawng was the battalion commander while Colonel Hkun Nawng served as the deputy commander. Company A,B,C and D were headed by Adi, Pauhkang Naw, Naw Seng and Labya Tang respectively. Labang Naw was in charge of the vehicle troops while Npawt Yaw was head of office administration. Luk Kyang was the warrant officer. Gang Di, Sangdung Hkin, Zau Tu, and Maran Tu also worked with Luk Kyang.

In April 1948 while our D Company troops were in Kutkai conducting military drills, an order from U Nu-led HPSPL government came to 1st Kachin Battalion commanders to crush all Communist insurgents. Leaving only D Company troops and the family members, the rest of the 1st Kachin Battalion troops left for Tawadi in Pyinmana township. Once again, Naw Seng was tasked with the responsibility to lead all the frontline troops. Those pulling the strings throughout the anti-Communist military campaign were U Nu,  Ne Win, Aung Shwe, Aung Gyi, Ba Swe and Kyaw Nyein.

For those wealthy politicians, all they wanted was to crush their political rivals once and for all. The Kachin troops were given three months to put an end to the Communist uprising before the enemy could build a stronghold. The Kachin were also instructed to cut off enemy’s communication lines and supply routes, execute those trying to escape from being captured and destroy all villages harbouring the insurgents.

As a result of attacking, burning villages and killing the inhabitants in lower Burma by U Nu government’s order, the Bama nationals dubbed Naw Seng as the ruthless butcher and began holding grudges against him and the Kachin troops. I have asked about this to Asan Gam, Zau Nan and Ja Hka, who went along with Naw Seng.

“Naw Seng and us the Wunpawng troops, had no animosity towards the Bama nationals. Even Naw Seng himself had never thought of or planned to execute unarmed Bama civilians. We never wanted to burn villages destroying innocent lives. Naw Seng was just a captain and he had no authority to decide which villages to attack or burn.  The duty of the captain is to follow military orders imposed by his commanders, colonels and generals. None of us wanted go on a killing spree pillaging villages. The Bama generals called the shots, we carried out the orders.”, I was given this answer.

A martial law was soon imposed to completely cut off supply lines of the communist insurgency by destroying villages supporting the rebels. Meanwhile, the Bama generals demanded even more from the Kachin while Naw Seng and his troops were in rain or shine or mud herded like a pack of wild cattle waging one war after another and executing civilians from selected villages. The Kachin were getting tired of the killings. The captives were transferred to the Bama military police where they employed inhumane methods to interrogate the poor souls utilizing Fascist torture systems.

Deemed guilty or not, all captives were executed by the Bama troops. The inhabitants of Tawngngu, Kanta and Ma-U Pin were rounded up and ruthlessly tortured at will. The villagers were given tree branches and they were forced to fight to death.  The survivors were then grouped with new captives from other villages and executed in batches.

Three months had gone by without them even realizing it. Naw Seng and his troops continued following orders to accomplish the task assigned to him. Soon the D Company troops joined the campaign and we all went to fight in different fronts.

The MI generals then ordered us to execute all male captives we captured at the Communist stronghold in Ngataik Chawng without using the guns but spears. The Kachin troops were in dilemma unwilling to spear the captives to death, so they just shot and killed them from a safe distance. In October 1948, Kachin troops rounded up the villagers from Bugoi and separated the males from females. The female captives were taken to Dumhpawng village while the males were all executed and their entire village burned down. All these execution and pillaging orders directly came from the war office while they kept a close eye on us making sure we were following orders.

In addition to using 1st Kachin Battalion troops to kill many civilians, the U Nu-led government also deployed the 2nd Kachin Battalion troops to execute Karen nationals who sided with the Communist rebels in areas surrounding Pathein. As a results, the U Nu-led government had successfully turned Bama and Karen nationals against the Kachin troops. In reality, to maintain the status quo and protect their accumulated wealth and power, the ruling government was just trying to purge their rivals. Unfortunately, Naw Seng and his troops were forced to commit these heinous atrocities.

The Kachin rank and files detested having to follow orders to kill innocent civilians. The Kachin did not want their family members and relatives wantanly executed by anyone as well. To the Kachin troops, they saw it as the central government instigating hatred towards the Kachin by fellow Bama and Karen peoples. Naw Seng was also getting weary of taking orders from the Bama generals.  It had now been half a year having to march up and down countless hills engaging the Communists and Kachin were getting very exhausted. Our boots and uniforms were ragged and worn out but we kept fighting having to follow orders. The Kachin gradually lost their will to keep fighting. In 1948 November, Kachin officers and troops began complaining to those leading the military campaign.

The following are the reasons for the growing dissatisfaction among Kachin troops:

Although having fought the Communists for half a year, the opponents could not be defeated decisively while Kachin had to keep killing civilians and burning villages.  There was no rest and everyone was getting exhausted from the war.

There was no animosity between Bama civilians and Kachin troops. The killing of unarmed Bama civilians by Kachin troops had created a rift between the two groups. The military expedition just exacerbated hatred towards the Kachin. This realization had made the Kachin detest the Bama high-ranking officers calling the shots.

When Naw Seng went to submit the war reports, he informed the Bama officers that Kachin troops were now getting weary of the campaign. Naw Seng was then promptly accused of contacting the Communists. The Bama officers alleged Naw Seng burnt all the letters from the headquarters. Naw Seng was summoned to the war office and interrogated.

There was no promotion for Naw Seng who had been leading the military campaign to suppress the Communist rebellion citing his lack of education while the Bama officers who did nothing were getting promoted to higher ranks. In fact, Naw Seng very well understood how Bama were unfairly treating the Kachin using this policy to suppress the non-Bama troops.