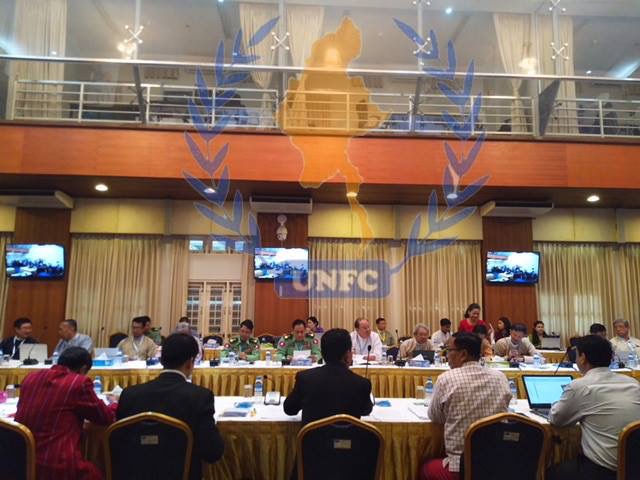 Two important meetings that would likely help move forward the stalled peace process were held between the government’s Peace Council (PC) and the United Nationalities Federal Council’s (UNFC) Delegation for Political Negotiation (DPN) on October 23 to 24 and the government and the 8 Nationwide Ceasefire Agreement (NCA) signatory Ethnic Armed Organizations (EAOs)on October 25 to 26.

The seventh DPN-PC meeting was said to be productive and that point number 5, UNFC nine-point proposal to amend the NCA, regarding military matters needed to be ironed out and another meeting would take place on November 8.

The government-signatory EAOs meeting for the first time on how NCA should be implemented in the future, with 21 proposal points from the latter, was discussed and further scheduled to finalize the agreement in October 30-31 Union Peace Dialogue Joint Committee (UPDJC) meeting and probably tabled it for the Joint Implementation Coordination Meeting (JICM) – the highest NCA organ – approval in November.

And since the two meetings are intertwined, especially in understanding the development of the NCA implementation which in turn would impact on the upcoming next Union Peace Conference-21st Century Panglong (UPC-21CP), probably in December before the year end, we need to look at both of the gatherings closely to understand the recent political development.

The seventh round of peace talks—which took place in Yangon between the UNFC’s DPN and the government’s PC on 23 and 24 October was said to be very thorough with only military‐related affairs left to discuss, according to spokespersons from both parties.

According to Zaw Htay, the president’s office spokesman, the reason the military matters remain for further discussion was due to the absence of military officials from both sides who will have to set detailed talks next time about deploying troops, he said, reported The Myanmar Times.

“This matter is being negotiated even with signatory ethnic armed groups, too. Some bad dealing with the matter can lead to the breaking of ceasefire. Therefore, we are taking time for negotiation on the military matters as it is also a concern of UNFC,” Zaw Htay added.

Reportedly, the most argued point is UNFC’s NCA amendment proposal number 5, which calls for prior agreement on the military Code of Conduct (CoC) and terms of references (ToR), whereas the government wants to let the UNFC members to sign first and work on CoC and ToR later.

Apart from this, the UNFC’s number 6 amendment proposal, on the formation of an independent monitoring committee which shall include international representatives acceptable to both sides, is still not resolved as the government side is still reluctant for such agreement.

However, DPN’s vice leader Nai Ong Ma‐Nga pointed out other obstacles rather than just the mentioned points.

In an interview with the Mon News Agency on October 25 he said: “For example if we look at the original nine-point UNFC proposal, we stated that nationwide ceasefire has to be declared. It means covering the whole country, but what comes out in the end is not nationwide but ceasefire which would only be effective within UNFC organization’s territories, which is quite a loss (seen from our bargaining position).”

He went on to complain the government’s prohibition to use the word “revolution”, even though all knew that the ethnic resistance is an act of revolution.

On UNFC’s weak bargaining stance he further stressed and explained: “If there will be argument in the implementation of the NCA, we have asked for international mediation within the JICM (structure). But now what we recently have agreed upon is that since all of us are involved in the JICM, arguments should be settled among ourselves within the JICM.”

This, in effect, means international mediation will not be involved.

Since the second UPC-21CP was held from May 24 until 29, the relation between the 8 signatory EAOs and the government has become somewhat cooled. And it seems the first‐ever joint meeting organized by the government with the signatories that took place at the National Reconciliation and Peace Center (NRPC) in Yangon on October 25-26 might have motivated to move further with the stalled peace process.

During the meeting the signatory EAOs tabled a 21‐point proposal to review in the implementation of the NCA.

According to the Global New Light of Myanmar report of October 26: “We mainly discussed weaknesses in implementing the NCA. We exchanged views on moving forward for peace while working between the political dialogue and the ceasefire. Out of the 21 points we discussed, the majority are agreed upon by both sides,” said Zaw Htay, a representative of the Peace Commission, who is also the the president’s office spokesman.

“We believe that both sides are satisfied with the two-day meeting. Generally, both sides reached consensus on over half of the 21 points proposed by the ethnic armed groups, and exchanged views on the remaining points,” Htun Htun Oo, the Union Attorney-General.

Yebaw Than Khe, of the All Burma Students’ Democratic Front (ABSDF) who represents the signatory EAOs said that there are three objectives to be fulfilled.

Firstly, to the government, the Tatmadaw or Military and the armed ethnic groups must be able to work together for political negotiations and ensure the smooth implementation of the NCA process.

Secondly, to make systematic preparations for current difficulties facing the government and the Tatmadaw. This means the political framework is not finished yet. These are to be prepared in a systematic manner.

And thirdly, to carry out the tasks practically, to seek the ways that are capable of solving these problems, according to Eleven Myanmar report of October 27.

However, the main unresolved points are the State-level national political dialogue or conference that are still pending in Shan and Rakhine States and should be organized by the two signatories – Restoration Council of Shan State (RCSS) and Arakan Liberation Party (ALP) receptively, which the government and Tatmadaw have so far refused to let it happen; and how to go about the endorsement of the 37 agreement points during the last UPC-21CP in May, to be included in the Union Accord and subsequently being approved by the parliament.

Besides, like the UNFC proposal number 5, which includes the agreement and finalizing of the Framework for Political Dialogue (FPD), CoC and ToR would need to be concluded after two years of NCA signing, as the on and off armed clashes have occurred between the RCSS and the Tatmadaw for more than 20 time during the period, even though the RCSS is a signatory of the NCA.

At the her opening speech, Suu Kyi underlined the need to lay foundation for the formation of the federal union, the participation of non-signatory EAOs in the peace process, the innovation of the UPDJC and the finalizing of the Framework for Political Dialogue (FPD).

She said: “Our duty is to go ahead with the peace process. Everybody should think and participate on how to make progress in the peace process. To talk about the tasks that have to be done, we should aim at achieving the laying of foundation for federalism (federal union) and its guiding principles, within the duration from today until 2018.”

Regarding reconciliation and participation of the non-signatories, she said: “National unity can only be consolidated if there is reconciliation and peace. The building of a federal union would have to be achieved through national unity. I would like to request the UPDJC members to help realize the inclusion of the remaining ethnic armed organizations in anyway possible.”

Other than that she talked about the setting up of a UPDJC office and the need to establish a Standard Operating Procedure (SOP) to enable effective implementation in discharging its duties. The task of the UPDJC also involved the finalizing of the FPD, which has not been finished after two years of signing of the NCA, before the next round of UPC-21CP.

Salai Lian Hmung Sakhong, a Chin National Front (CNF) leader on behalf of the Vice-Chairman of the UPDJC said national-level political talks should be considered to be held in areas of the RCSS and the ALP. Otherwise, problems encountered in the previous conference would be repeated. The RCSS and ALP said that since they were unable to hold political discussions with their respective people, due to the prohibition of the government and Tatmadaw, they refused to recognize and sign the first Union Accord during the UPC-21CP held in May.

Meanwhile, the UPDJC ended as scheduled on the second day around 3:30 pm, without any agreement or decision made on the array of issues starting from State-level national dialogue in Shan and Arakan States to JMC related CoC, ToR and FPD finalization. It was learned that work groups will be formed to review all the outstanding issues around the third week of November.

After looking at the the three meetings – government and 8 signatory EAOs; government’s PC and UNFC’s DPN; and UPDJC – we could see that the inability to finish proper guidelines in the implementation of the NCA; and failing to accommodate all-inclusiveness participation of remaining non-signatory EAOs are the main problems hindering the peace process.

The disagreement on the first Union Accord stemming from the May UPC-21CP that was supposed to be tabled and endorsed by the parliament couldn’t sail through as the agreement of the 37 points was taken by many EAOs and political parties as not being done according to the NCA procedure.

Again, the prohibition of the RCSS and the ALP, both signatories of the NCA, to conduct political discussion among their own people, by the government and the Tatmadaw could be also seen as a lack proper guidelines which actually should come from FPD, but unable to make use of it as it still hasn’t been finalized. This makes the government and Tatmadaw come in and make decision, which actually is not their domain.

The same thing happened with the Ceasefire Joint Monitoring Committee (JMC), which has still not been able to finalized after two years, prompting the RCSS and the Tatmadaw to engage in armed conflict for more than 20 times during the last two years after the signing of NCA.

Regarding all-inclusiveness, the government is still unable to recognize the Federal Political Negotiation and Consultative Committee (FPNCC) also known as Northern Alliance and negotiate with it, while the wooing of the remaining four UNFC members to come into the peace process would need some accommodation, from the part of the government, on its nine-point amendment proposal to the NCA.

Apart from the mentioned shortcomings, the government is now faced with same old dilemma of the last two years, to either go forward with just the 8 signatory EAOs, out of the 21 EAOs, and achieve little or nothing politically, or try to accommodate in anyway possible to get the remaining EAOs on board the peace process and reap the profit of national unity and reconciliation.

The government now has to make an informed and reasonable choice to get out of this deadlock or face continued deterioration in all aspects of governing and international reputation.