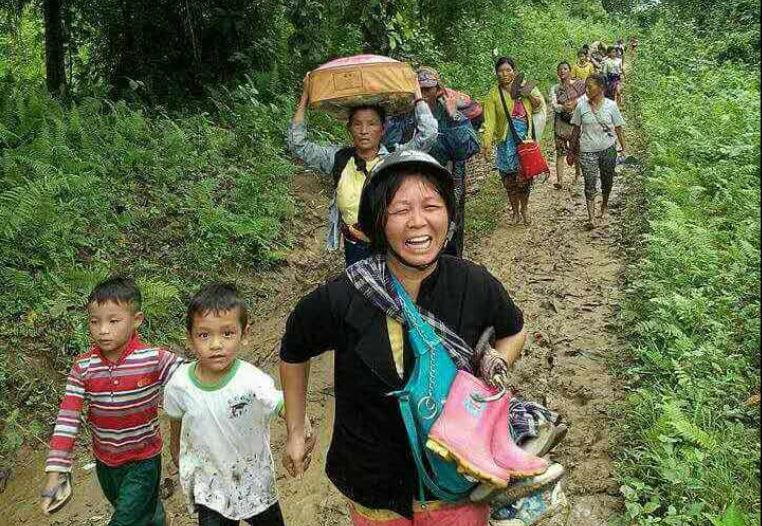 A surprise attack on civilians at Kasung village, just a few miles west of Kachin State’s capital Myitkyina by Burmese army troops on August 11 forced villagers to flee their homes in terror leaving their belongings and livestock behind. Almost everyone from Kasung has now reached Lambraw Yang where the newly minted IDPs are taking shelter, a KLN source reported.

On August 11 morning, combined forces belonging to Burmese army’s 381st and 384th Light Infantry Regiments (LIRs) under Mogaung-based 3rd Military Operations Command (MOC-3) raided Kasung village firing several rounds of heavy artillery. There was neither a KIA outpost nor KIA troops hiding in Kasung village, according to one of the raid victims.

Firing several heavy artillery rounds towards Kasung, Burmese army troops killed or wounded an unknown number of innocent civilians and destroying properties. Lamuk Awng Nu and Lagang La Nan were reportedly shot and wounded by Burmese troops. At least one body has been found in the village the following day. The exact number of civilians being killed or wounded during the attack has not been able to confirm as troops are still active in Kasung village and surrounding area.

Mr. Tu Hkawng, another victim who was shot and wounded narrowly escaped being killed, is now in Lambraw Yang. Kasung middle school teacher Sarama Qe Tsai and 11 villagers had been briefly detained by Burmese army’s 381st Light Infantry Regiment troops on Aug 11 but later released on the following day, the KLN has learnt.

The next day on August 12, local humanitarian groups and NGO members began arriving with supplies and started brainstorming to care for the displaced people, a Lambraw Yang resident told KLN. The Kachin Peace Creation Group (PCG) has reportedly submitted a petition to Naypyidaw for permission to get trapped villagers and collect the bodies of the victims. Led by PCG members, leaders of the Kachin Baptist Convention, Catholic Church, Myanmar Rescue Myitkyina Group, Namti Red Cross and other local NGOs arrived in Kasung village and rescued over 300 IDPs who have been trapped inside the village and on the way due to rising creek waters.

The Kasung IDPs were transported in several vehicles and they have currently been living at Lambraw Yang Baptist Church and Catholic Church compounds. Currently, about 1,100 IDPs are being sardined into tight spaces sleeping on tarpaulin sheets on concrete floors. Local Christian church members, humanitarian groups and Pat Jasan volunteers from Namati, Mugawng and Lambraw Yang have been helping Kasung victims. An unknown number of victims are reportedly still being trapped and wandering in nearby forest around Kasung area.