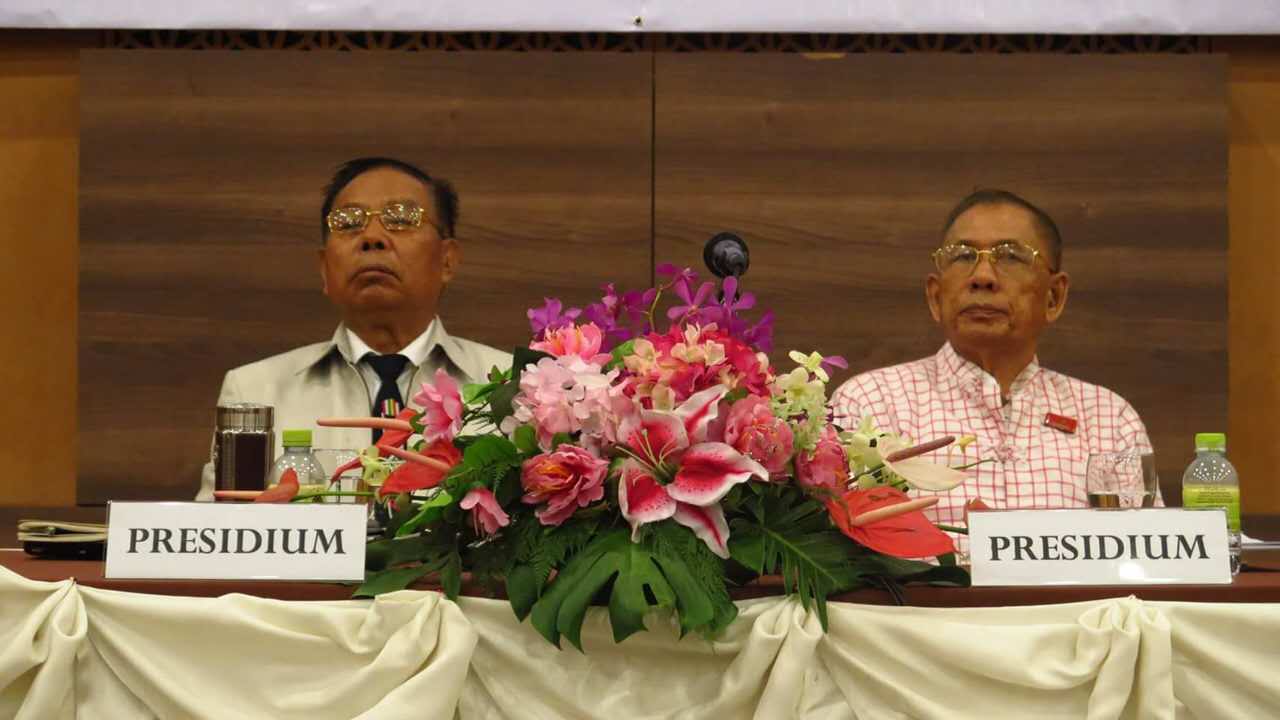 As the debate over the success or failure of the third Union Peace Conference (UPC), which is now renamed Union Peace Conference – 21st Century Panglong (UPC–21CP),  in relation to the last month, controversial approval of first part “Pyidaungsu Accord”, also known as “Union Accord”,   lingers on, the two Ethnic Armed Organizations’ (EAOs) blocs of United Nationalities Federal Council (UNFC) and the Federal Political Negotiation and Consultative Committee (FPNCC) are holding meetings, on how to map out their next move.

Equally, the government’s Peace Commission (PC) is also not idle as it has been meeting with the UNFC and also trying to meet the FPNCC, through the good office of Sun Guoxiang, Special Envoy of Asian Affairs with China’s Ministry of Foreign Affairs, according to the media.

Different from the past, the UNFC, comprised of 7 EAOs, has invited all 21 EAOs, except the National Socialist Council of Nagaland – Khaplang (NSCN-K), to its bi-annual conference scheduled to be held from June 20 to 29.

“In the first section [of the conference], we will hold a meeting among the UNFC members.  The meeting with non‐UNFC members will be held in the second section. The first program  will take seven days. It will be held from June 20 to 26. The second program will be held  from June 27 to 29,” according to Tun  Zaw, joint general secretary of the UNFC.

The second program would discuss about common programs for all EAOs based on the decision made in KIO controlled area, Mai Ja Yang, during the ethnic leadership meeting in 2016.

Reportedly, at the conference, apart from mapping out policy matters and conducting new election, the UNFC is expected to make decisions regarding applications for new  members, or allowing other members to resign. Two of the current seven members, the  Kachin Independence Organization/Army (KIO/KIA) and the Wa National Organization (WNA) have both submitted  resignation notices that will be discussed.

Earlier, two years ago, the Myanmar National Democratic Alliance Army (MNDAA)  and Ta’ang National Liberation Army (TNLA), both the UNFC members have also tendered resignation, due to the inability of the UNFC to help them out of armed engagements with the Burma Army or Tatmadaw, but no official approval was heard and just generally taken as being accepted.

Following the Nationwide Ceasefire Agreement (NCA) signing of the 8 EAOs in October 2015, the Chin National Front (CNF) and the Pa-O National Liberation Organization (PNLO) were also dismissed by the UNFC for not sticking to its majority decision not to sign the NCA.

But the Karen National Union (KNU) even before the NCA signing has suspended itself from the UNFC, due to the rivalry of leadership position with the KIO and as well, disagreement over the signing of the NCA.

The KNU played a leading role of the signatory 8 EAOs, in signing the NCA in October 2015.

The UNFC, which started out with 12 members now currently has 7 members, that includes the KIO, the New Mon State Party (NMSP), the Karenni National  Progressive Party (KNPP), the Shan State Progress Party (SSPP), and the Arakan National  Council (ANC), the Lahu Democratic Union (LDU) and the WNO.

The UNFC’s bi-annual conference would likely seek to mobilize the EAOs’ political common position so as to increase bargaining power and could also be a last ditch effort to breath fresh air in for the future survival of the umbrella organization.

Other than that, regarding the acceptance of new members into the UNFC, the government has been viewing it with skepticism, as while the KIO would leave the UNFC, its proxy Kachin National Organization (KNO) – an unarmed Kachin international setup –  would reenter the organization as a member. The KIO is now member of the Wa or Pangkham-led FPNCC.

The UNFC maneuvering – especially the rumor of KIO’s branching out in two ethnic umbrella organizations – seems to irk the government’s PC, as Zaw Htay  spokesperson of state’s counselor office told the media that the government  could not accept such a development.

The KIO has already decided that it would resign from the UNFC, but leaves its proxy the KNO as a new member within the UNFC. At the earlier stage of UNFC formation,  the KNO was about to apply for its membership but somehow combined with the KIO and stands as one within the UNFC until today.

Zaw Htay told the media that in the wake of the UNFC’s reorganization, he had sent Min Zaw Oo, member of the PC’s think-tank, to relay the basic government’s position that it only recognized the original 21 EAOs that are involved in the peace process from the beginning and would only negotiate with them.

He stressed: “If there will be more new members incorporated, that are not involved in the NCA, in the UNFC, we won’t be able to talk to it any more. UNFC is scheduled to start on 20thJune and we are relaying our message for them to consider ahead of the meeting,” according to the 7 Day Daily report of June 17.

Latest insider reports said that the on and off meeting between the UNFC’s DPN and the government’s PC  doesn’t seem to progress much from the “agreed in principle” posture, vague outcome. It was said that the next meeting for the sixth time, on the UNFC’s 9-point proposal on the alteration of the NCA, would be in Yangon.

The UNFC’s proposal of first signing a Deed of Commitment (DoC) and continue spending time to negotiate on Framework for Political Dialogue (FPD), before finally signing the NCA, was rejected by the PC. The government’s position is for the UNFC to sign the NCA after reaching agreement on its 9-point proposal being included as an appendix in the NCA.

Escalation of war in Kachin State

Following the June 5 dropping of leaflets ordering the civilians’ evacuation from the region or else be considered being party to the KIO, the Burma Army closed off all routes to Tanai town, as the June 15 deadline came into effect. It was said that hundreds have taken refuge at churches and monasteries in Tanai town ever since.

Meanwhile, insider sources said that recently, Khin Zaw Oo of PC, on his way back from Nepal, met General N’Ban La of KIO in Chaing Mai, where he was asked to convey message to the Commander-in-Chief Min Aung Hlaing that the KIO wanted a direct negotiation channel to talk about the ceasefire. The government side has signaled to agree to the proposal and negotiation on it seems to be in progress, although no details were forthcoming, as of this writing.

The FPNCC met from June 15 to 19 in Panghsang, but no news from the meeting has come out in the open yet. It was believed that the alliance might map out on how to deal with the government and as well to find ways to satisfy the Chinese demand to be more accommodating to the government’s peace process initiative, which the alliance couldn’t agree without altering the present NCA.

For the moment the government position is to stick on its NCA guidelines and negotiate accordingly, with the tendency to hold talks with the FPNCC members separately, which the latter insisted to only negotiate as a group together. To date, the government’s deliberation seems to be stagnant and not making any headway.

Recently, Aung Soe, a member of the government’s Peace Commission and a lower house lawmaker told the media that the government “will meet three northern groups together [the TNLA, the AA, and the  MNDAA] and the rest separately.”

But Tar Jode Jar, vice chairman of alliance member the TNLA confirmed to the BBC on June 19 that the PC has asked the Chinese to arrange for a meeting with the FPNCC and likely to take place after June 20, in one of the town along the border in China. However, the meeting protocol is still not clear, as the PC is insisting to meet the FPNCC separately as before. And this might become a barrier even for the meeting to take place.

As the PC shuttling to and fro to woo the UNFC’s remaining members intensified, the government’s intention to get more EAOs sign up continues to be unpredictable. As of now, the PC’s offer that the UNFC’s 9-point proposal to alter the NCA was said to be stuck at the stage of agreeing to only include in the NCA’s appendix, in return for its members signing the NCA.

The UNFC headed by the Khu Oo Reh was said to favor the signing of DoC first and take time to iron out the FPD, before inking the NCA. The PC, however, was not so enthusiastic on the UNFC’s proposal and said to disagree to it.

The latest development was that instead of signing the DoC, a joint-statement between the DPN and PC would be in order, if the UNFC agrees to the solution of adding its 9-point proposal to the NCA as appendix. This would become clearer if they meet again in July for the sixth time in Yangon. Furthermore, whether the UNFC would remain a formidable organization, after the resignation of KIO and the unclear posture of SSPP that is member of both the UNFC and also FPNCC, is an open question that only time will be able to answer.

As for the interaction between the FPNCC and the PC, both the alteration proposal of the NCA and the mode of meeting between the two parties are still problematic, as the former would only like to meet as a group, while the latter is keen to meet the FPNCC members separately.

In view of the recent Amnesty International negative report, titled “All The Civilians Suffer: Conflict, Displacement, and Abuse in Northern Myanmar“, on human rights violations in Kachin and Shan States by the government’s troops; the on and off armed engagement in Shan State between Burma Army and the Northern Alliance – Burma (NA-B); and the escalating war in Kachin State, indicated that the situation on the ground is still not favorable and conducive for the ongoing peace process.

In sum, the overall political and military situation have not changed in the aftermath of the third UPC and could even be said as tilting towards more to the pessimistic side. The contending parties also continue to be bogged down in micromanagement of indulging in gaining political edge primarily on both sides of the political spectrum, without coming to the stage of adjusting the common visionary concept on how the country should be molded and bring forward the nation-building process that hasn’t even started in earnest, after nearly seven decades of independence from the British.