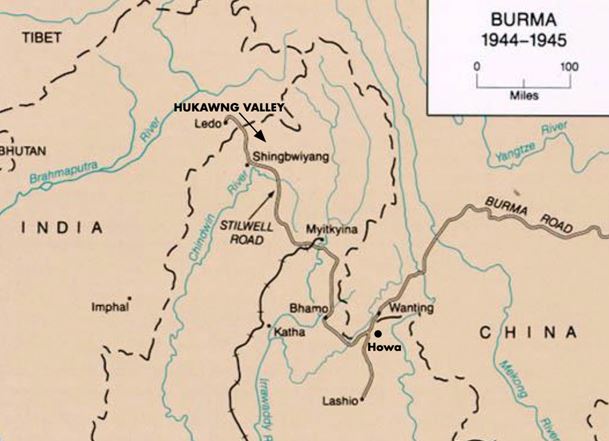 The move westward by the Kachins of Howa in the 1950’s, is a noteworthy chapter in the Kachin migration saga. The internal migration venture took settlers from Howa in the borderlands of northeastern Shan State, to the Hukawng Valley,some 400 miles away in Kachin State’s far northwestern corner, bordering India.

The nexus was the Ledo/Stilwell Road of WWII fame. The road, no longer in use, was built in 1944 by US Gen Stilwell to provide the Allies with a land route to transport supplies to Japanese occupied China. It began at Ledo in Assam, India, and wound its way across the Hukawng Valley to meet up near Howa with the old Burma Road that connected the Shan city of Lashio with Kunming, capital of China’s south west province, Yunan.

The Howa Kachins were led in this mass migration move by their chief, Duwa Maran Hkun Hpung, one of the most influential and politically active of Shan State Kachin chiefs.

In the lead up to independence, the Howa Duwa featured prominently in Kachin negotiations that culminated in the signing of the historic Panglong Agreement. As Chairman of the Hsenwi-Mongmyit Kachin Chiefs’ Council, he spearheaded the push for Kachin areas in Hsenwi State to be recognized a Kachin “Sub-State”, given the crucial role Kachin fighters played in driving the Japanese out during WWII. A formal agreement cementing this designation was signed by Kachin and Shan leaders in December 1947, and endorsed by the powerful Hsenwi Sawbwa, Sao HomHpa.

Hukawng is home to the Hkahku (up river) Kachins, whose warriors fought valiantly alongside famed Burmese general Maha Bandula in his victorious Assam campaigns in the early 19th Century. The lush, green Hukawng Valley, ringed by high mountains and fed by the headwaters of the Chindwin River, is an ecologist’s paradise, where rare fossils embedded in amber have been found, and tigers still roamed. A tiger reserve, dubbed the world’s largest, was established in 2001 by the US based Wildlife Conservation Society.

The idea to lead his people to the Hukawng Valley came to the Howa Duwa on a trip he made to the area in 1945. Seeing the sparsely populated wide expanses of virgin land, the Howa Duwa recognized the opportunities it offered for his people, whose farmlands had become increasingly infertile through rigorous slash and burn hillside cultivation. On his return to Howa, he began promoting the idea of a mass migration, and it quickly caught on. In the dry season of 1951, a small advance group moved to Tingkawk, on the southern edge of the Valley.

The plan was for the pioneer group, made up only of able bodied men, to lay the groundwork for larger groups to follow. However, due to rumors that everything had been made ready by the government, families, including women and children from other parts of northern Shan State, began to join the move to Hukawng. With no shelters in place, and jungles still needing to be cleared for cultivation, the first year was so harsh, the pioneers were on the brink of starvation.

After the first calamitous year, the situation improved when the wetland paddy fields began to yield crops, providing the settlers with food as well as surplus rice to sell. Several hundred families from Howa and other areas in Northern Shan State began moving up, and the initial settlement at Tingkawk became overcrowded. New settlements sprang up at many other places along the Ledo Road, spreading as far east as to the Indaw Gyi Lake area. No official statistics are available, but it is estimated that 7,000 to 8,000 Kachin families from Shan State moved to the Hukawng in the years between 1951 and 1960.

As the newly arrived communities began to thrive, the forward-looking Duwa and his son Howa Maran Zau Gam, a WWII US-Kachin Ranger veteran, made plans to start a demonstration and experimental farm at Tingkawk. They were assisted in this project by the American Baptist Mission at Myitkyina, which secured funds to procure from the US, an “Oliver tractor, with caterpillar tread, equipped with a bull- dozer blade, gang plough and disc, which could be used for breaking new ground as well as tilling the soil afterwards.”

For his pioneering efforts in leading the migration of Shan State Kachins to the Hukawng Valley, the Howa Duwa was honored with the prestigious civilian order of Wunna Kyaw Htin by Prime Minister U Nu.

The Howa family’s fortunes changed dramatically in the aftermath of 1963. Towards the end of that year, the Kachin Independent Army (KIA) arrived in the Hukawng area to establish its presence in western Kachin State. The Burma Army,arriving on the heels of the KIA, began its intimidation tactics against the civilian Kachin population. Houses were torched, properties seized, and villagers beaten and imprisoned. The atrocities became so unbearable, the Howa Duwa and family, together with other Kachin villagers, abandoned homes and farms to hide out in the jungles. As one of the Howa Duwa’s grandsons put it, the Howa Kachins were the first IDPs in the post-independence era. In 1965, the family was caught in their jungle hideout and imprisoned. After their release, they had to leave behind the new life they created at Tingkawk, and resettle in Myitkyina.

As for the other Hukawng families, their fate has been just as harsh. They have been subjected to massive land grabs by army “crony” U Htay Myint, whose Yuzana Company took over about 400,000 acres of natural forests and farm land in 2006/2007, to establish mono-crop plantations. The confiscated land spreads over 5 villages, leaving over 1,000 Kachin families landless and deprived of livelihood. A bitter land struggle continues to be waged between the powerful Yuzana company and farmers of the Hukawng Valley, many of whom are descendants of pioneer settlers from Howa.