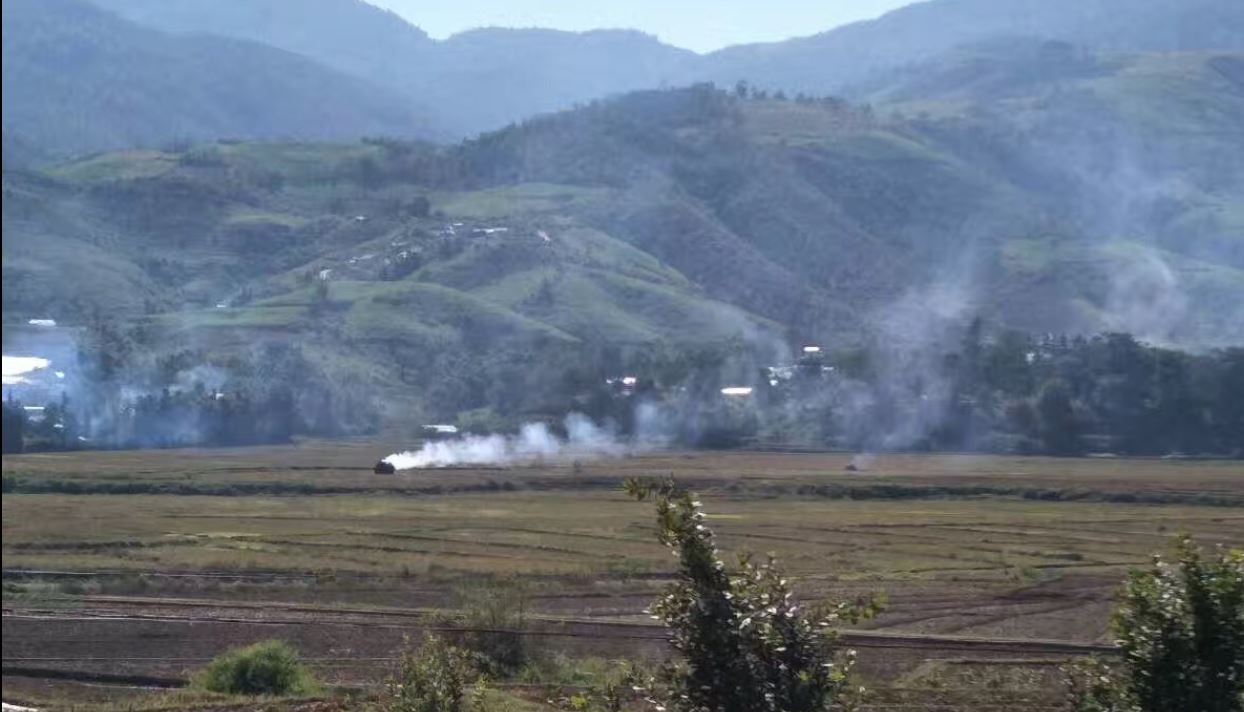 As fighting raged between northern-allied troops (NA-B) and the Burmese army in northern Shan State, about 70 Mongkoe residents were taken hostage on Nov 19, 2016, and taken to the army’s Byuha Hill (tactical command post).

Most of the hostages were Lisu who live around the army base. Initially, over 100 civilians, including a newly-wed couple and relatives attending their wedding party, were rounded up and taken to Byuha Hill. Relatives of the couple who happen to be Chinese citizens, were released after hours of interrogation. About 70 civilians made up of Kachin, Lisu, Chinese and Shan ethnicities were held for about two weeks inside the army base.

Kokang (MNDAA) troops conducted a 3-night raid on Byuha Hill and rescued about 60 hostages left inside the army base. Two of the hostages were killed by Burmese army troops.

KLN has conducted a series of post-release interviews with the hostages rescued by Kokang troops, and given below are transcripts of the interviews:

I was taken captive by Burmese troops while performing a Lisu dance at the wedding. I was among those rescued by Kokang troops on the first night of the 3-night rescue attempt.

Kokang troops attempted to rescue us several times. The Burmese soldiers knew they were approaching and forced us to stay inside a room farthest away from the incoming Kokang troops. As the Kokang troops began their raid they shouted at us to run away quickly.

The army base where we were kept, has three layers of fences. We were forced to find small containers and use them as toilets in our own rooms, and were only allowed to throw out the excrements in the morning. We were not allowed to talk or look at each other. Whenever someone raised his or her head, he or she was hit by the butt of a gun. The soldiers would ask three or four of us to go outside the base in the morning to find food and cook for everyone. We could have run away then, but we didn’t, fearing for the lives of others. So, we brought back cooked food for everyone.

The Kokang troops said they had come to rescue us and told us to run away quickly. They also told us not to blame them in case someone got shot in the line of fire.They attempted to rescue us for three nights. Two of us were able to run away on the first night. Over 20 hostages were rescued on the second day. The rest was rescued on the third night.

We couldn’t raise our heads while we were running. The Burmese troops fired very low while the Kokang troops fired high to avoid hitting us.

I was held for 13 days. During that time, some people came to ask for release of Chinese citizens. Whenever there was gunfire, we were told to lie down. We were allowed to dig a small hole to protect against being hit.

Burmese soldiers arrested me on Sunday night while I was staying inside my house. They told me not to move, and pointing their guns at me, forced me to put my hands up, tied my hands, and brought me to the border gate. I told them I wasold and sick, left behind at home to take care of the pigs and chickens.

They took me near my house and we lodged there for a night. After that they took me to the Burmese military base.

I was freed on Dec 9 evening. There were 12 hostages left when I was freed. They were Lisu, Chinese and Shan nationalities.

They tied my hands day and night for four days. On the fifth day, they untied my hands. I had to sleep and eat with both hands tied up. Whenever I made a slight movement, they beat and kicked me. They fed me by putting food into my mouth. Just two to four spoon-fulls at a time.

I was held at the Burmese army base for four days. We were asked to stand near bunkers, and build fences around the base. We had to take turns to find food and cook for the hostages and soldiers. It was very cold and we had no blankets. We had to sleep on the ground above the bunkers. If someone came to attack the army base, we would be the first to get hit by the gunfire. We were used as human shields to protect Burmese soldiers from attacks. We were beaten with rifle butts for slow responses and failure to understand commands.

Burmese soldiers told us to raise our hands up high all the time. Some male hostages were forced to kneel and stay still like that for a long time with their hands behind their head.