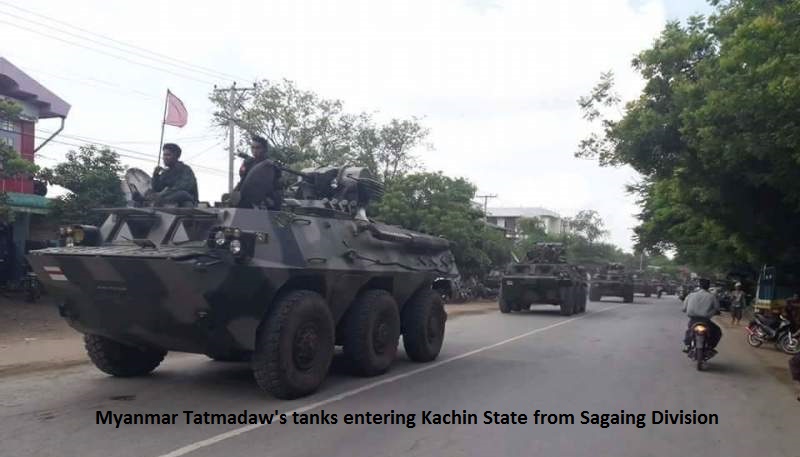 I find the commentary by Si Thu Aung Myint in the Burmese section of the VOA on the current Tatmadaw offensives in the KIA area of Nhkram Gidon to be very troubling. He made the observation that it was difficult to say who was to blame for the offensives -the Tatmadaw or KIA – yet went on to justify the Tatmadaw’s attacks on KIA posts by saying the KIA ambushed Tatmadaw convoys and destroyed bridges.

What Si Thu Aung Myint does not seem to understand is that most of the bridges in the war-torn Kachin region were built by KIO during the 1994-2011 ceasefire period under “Buga Sharawt Masing”, a rural development project. So it follows that the KIA would not destroy what it had built unless there were mitigating circumstances to do so. No standing army would stand by and watch military trucks full of ammunition and troops coming to destroy it without taking steps to hinder them.

From an ethnic Kachin perspective, the Myanma Tatmadaw is an occupying army in ethnic homelands. I am sure current Myanma Tatmadaw leaders know full well what it is like to live under foreign occupation, given Burma’s recent history when it was occupied by British colonials and Japanese fascists.

It is important to point out that the KIA and other ethnic armed groups have never entered Burman-inhabited lands and attacked both soldiers and civilians alike. Ethnic armed groups have confined themselves to stationing and operating in their own inherited lands. From an ethnic soldier’s perspective, it is his or her duty to protect his or her heritage, language, culture and land by repelling invading Tatmadaw troops. Ethnic soldiers and an overwhelming majority of ethnic nationals see the Tatmadaw as a colonist army that perpetrates abuses on its ethnic colonies, perpetuating overbearing control from the Myanmar capital. In short ethnic armies are waging a defensive war to hold off the onslaughts of the Myanmar Tatmadaw.

Troops have been transported from as far as Sagaing, Mandalay, Kalay and Pathein to attack two KIA frontline posts. Local military observers say such a large-scale military deployment can only be made by the direct command of Army’s Commander -in-Chief.

Local military observers predicted the move as the Tatmadaw’s first step towards attacking KIO’s Laisin headquarters. The frontline posts are located about 10 miles east of the Myitkyina-Bhamo road and they are not that strategic for local civilian use.

Attacking a KIA post which is located far enough off the main motor road is an outright violation of the agreement made between KIO and Burmese government in May, 2013. KIA sources said according to the agreement they had already moved their military posts stationed alongside the roads.

While the 21st Century Panglong conference led by State Councilor Daw Aung San Suu Kyi is progressing on one hand, the Myanma Tatmadaw is carrying out its own mission by transporting more troops and ammunition to the Kachin region, building concrete bunkers, and setting up more military bases along the Myitkyina-Bhamo-Sinlum-Kaihtik-Kampaiti roads. More and more IDPs houses and public schools have been transformed into military barracks and stables for horses used in transportation.

It is extremely important to clearly see the underlying factors of the on-going war in the Kachin region, what the aspirations and demands of ethnic armed groups and their supporters are, what local inhabitants are going through, and why the war is continuing despite progress towards democratisation in lower Burma.  It is vital to pinpoint who is responsible for the escalation of the war in the Kachin region. The titular head of government, State Councilor Daw Aung San Suu Kyi, and her elected government, democratic nations and individuals need to take responsibility to stop the Tatmadaw’s offensives in order to prevent further divisions in the already divided nation of Burma.

Sithu Aung Myint was ousted from DSA years before he entered the media circle. A former cadet who did not complete his course at DSA, Sithu Aung Myint went underground and met with Padoh Mahnsha, the fallen Karen leader who devoted to the cause of Karen rebellion against Burma Army. Then he surrendered to the authorities before he reappeared in Rangoon and wrote articles on some magazines. Before he joined the DSA he was so much enthusiast to become an Army officer, according to his close friend. But why did he was expelled from the military academy was not clear. Today, most people who know him very well just draw their conclusion as he is sitting on the fence. Some said he want to have kind of blessing from the Commander in Chief of the Burma through his positive critics on Burmese Army.