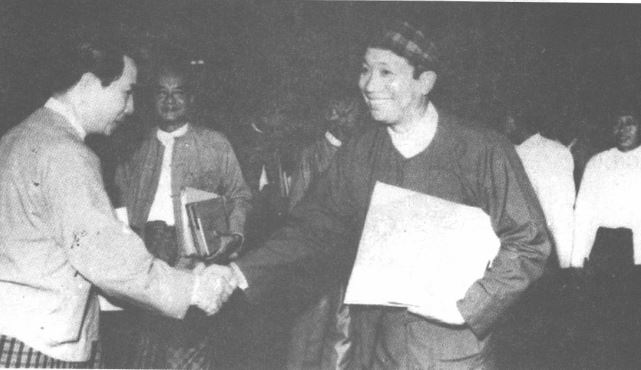 (An archive scenario on some of the Kachin historical eventful collections)

Among the five KIO Heads, Chairman Maran Brang Seng was one of them who took long successive years of his leadership terms since he was nominated with the proposal of meeting held under KIO central committee between January 15 – February 5, 1976 as a Chairman and Head of both KIO and Kachin Independence Council (KIC).

KIC, as a steering committee or governing body, is derived from the KIO. It is to enact the law and order, and making the verification on various fields of every department such as Culture and Literature Dept., Education Dept., General Administration Dept., and others.

The meeting of KIC/KIO/KIA was convened from 10th to 20th May 1967 at Jingma Yang, Htarahku, in Nmai Walawng region. According to the memorandum of the meeting agreed upon for the re-commission to China, Mr. Maran Brang Seng with a group of 34 members on 9th of July 1967 set off from Machyang Dingsa Camp, General Headquarters, Nmai Walawng region for China. In the month of June 1967, there was a communal riot between the Chinese residential of Burma with the Burmese people in Rangoon, the capital city of the country. During the period, a decade between 1967-1976 China was deeply infused with the ideology of Cultural Revolution Movement under the China Communist Party.

During the year in 1967, the Chinese – Burmese communal issue at Rangoon was so intensified to cultivate the actions organizing the Burma Communist Party (BCP) and Pawng-yawng National Defense Force (PNDF) in vengeance of China for the dishonored act over the Chinese residential by the Burmese people. While in Beijing KIO was also persuaded to be under BCP along with PNDF led by Lahpai Naw Seng. But the proposal was denied by Brig. Lahtaw Zau Tu and the situation brought into a conflict of war between KIO and BCP – PNDF in Shan state ranging from Munggu Hpawngseng on 1st January 1968 with a series of war for about 8 years. In due course Brig. Lahtaw Zaw Tu and his group retreated from China and reached their headquarters Shingbwi camp on 10th February 1968.

On analyzing and reviewing the armed conflict between KIO and BCP, both leaders were verified by CCP and thus the resolution was passed over on 6th June 1976. The resolution was agreed to take into the following terms: –
(1) To fight the common enemy
(2) KIO does not need to stay under BCP
(3) Joint military alliance
(4) Politically autonomy with self-determination within the Union of Burma.

A meeting of KIO central held between June and September 1969 was called upon to review the overall political status in order to upgrade and adjust relevantly to the task for which the amendments bear the act “Act 69” according to the year of the meeting 1969 at Baknoi Prang Sha-it Yang, Pajau Bum. Re-establishment of the new amendments constitutes an organized act of the Party Committee System for which Kachin Independence Organization Central Committee (KIOCC) was authorized as the highest powerful body and KIC again came under its next position. Lahtaw Zau Seng (GOC) was reappointed as Chairman and Head of both KIOCC and KIC respectively. Thus the KIOCC with its organized party committee system decides and directs the political objective of the nation.

There were only 2 brigades of KIA known as “Model Brigades” before 1972. The year 1962-72 marked the BCP’s greatest ever period of military expansion. The BCP’s main immediate target was the KIO which had already overrun most of the China border areas in the Kachin State and controlled much of the Kachin sub-state region in the northern Shan State. At the height of the BCP’s offensive, the fighting among the three sides – KIA, Revolutionary Council Army and BCP broke out intensely in the Kachin State and Kachin sub-state areas. During this time, contacts for peace talks were made between Lt.Col. Lahtaw Zau Dan (Kachin sub-state region) and Col. Sein Mya (No. 99 Light Infantry Division).

In June 1972, three and a half month ceasefire was agreed between Lt.Col. Lahtaw Zau Dan (KIA) and Col. Aye Ko (North-East Command). The Revolutionary Council tried to persuade the KIO to join forces against the BCP. In return, the KIO requested supplies from the government. However, Brig. San Yu (Voice Chief of Staff and Deputy Ministry for Defense and Planning) turned down this request. In the end the three and a half month long ceasefire was broken.

This article was first published in Kachin Research Journal Vol III in Jan, 2010.