According to KIA sources, 3 fighter jets came to bomb on their positions as Burmese Army troops suffered heavy casualties at around 12:40 pm. A KIA frontline source said 27th Battalion troops found the bodies of one sergeant and a private from Burmese Army’s 317th LIR. One KIA Lieutenant and a private were wounded in the battle.

Burmese Army’s artillery units have been firing scores of 60 mm and 120 mm mortar shells on KIA positions around Mahtek village from Kai Htik and Lawa Yang since yesterday as its ground troops advanced towards Du Hku and Mahtek village.

Another battle took place between KIA’s 1st Battalion troops and a combined force of Burmese Army’s 521st LIR and 142nd LIB led by Lt. Col. Kyaw Htun Lin near Madang Yang village at around 10:50 am. The battle lasted for about one and a half hour. No casualties have been reported from either side.

In northern Shan State, KIA’s 38th Battalion troops engaged in a battle against a combined force of about 300 Burmese Army soldiers from 506th LIR and 416th LIR near Loi Seng village at around 10 am on Mar 23. 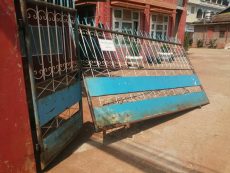