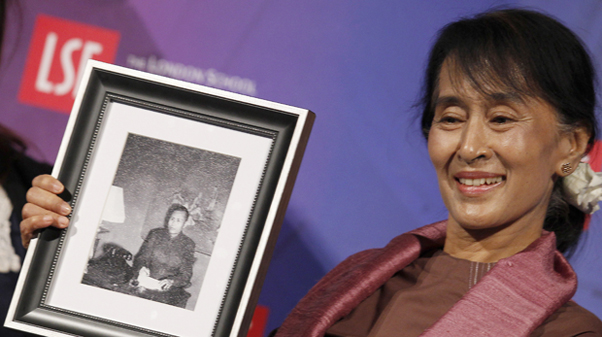 During the panel talk held at the London School of Economics on June 19th, 2012, Aung San Suu Kyi was asked why she has been reluctant to condemn the Burmese military offensive action against the Kachins that has displaced over 80,000 people. In response, she said “resolving conflict is not about condemnation, it is about finding out the root, the cause of the conflict.” Such a remark came as a blow of insult to the injury for many Kachins who admire and respect her as a champion for human rights and democracy for all the people in Burma.

On the other hand, the remark clarified her true position in regard to ethnic minorities, at least to the Kachins, as a newly elected MP of the current reformed government. She thus resonated Nay Pyi Daw’s official tone. She even underscored that the conflict has even produced a positive aspect that individual Burmese ethnic nationalities and organizations are galvanizing to assist the displaced refugees.

The miseries of the Kachin people and deterioration of their land which have been under systemic exploitation and dehumanization perpetrated by the successive Burmese government did not seem to strike her as an obvious root cause of the conflict.  Thus, with no disrespect to the ne plus ultra symbol of freedom and democracy in Burma, her statement begged for some clarifications. Does she mean an hour-by-hour incident report leading to the clash in June 9th 2011 which ended 17 years long cease-fire? If so, the incident was not the cause of the conflict, but the effect of long injustice done to the people. Or, does she refer to the root of the over half a century Kachin freedom struggle against the Burmese government? Here are some roots, causes among many other to the current Kachin situation to answer the latter question.

First, it is because of the failed historic Panglong agreement masterminded by the General Aung San, the father of Aung San Suu Kyi. The promise of the union of equals explained by the famous line of Aung San, Kachin Da Kyat, Bamar Da Kyat (the Kachins are entitled one kyat when the Bamars entitled to one kyat), has never been realized after 55 years. Instead, the Panglong agreement was abused and used to foster unequal treatment toward ethnic minorities that has led to unequal developments.  The majority Bamars, however, have received the best of the worst society can offer.

Second, the Burmese government has historically treated the Kachins and their land as a colony that must be subdued and exploited. Concurrently to promote such an colonial enterprise, Burmese colonizing project entails systematic creation of obstacles to deter intellectual progress of the Kachin people, repression their identity as a people by marginalizing their cultural and religious traditions, and well-planned racial project to enhance divisions among the Kachins while promoting systemic ideology of Maha Bamar (superior Bamar) in the population.

Thus, the Kachin situation simply transpires as a gesture of discontent resulted from more than a half century long manipulation, dehumanization, and oppression of the Burmese government toward the Kachins and their land.

In contrary to the popular belief concocted by the Burmese government, the Kachins are justice and peace loving people. As many people around the world, they dislike violence and war. They have engaged in this war as the last resort. The General Gumhtang Gam Shawng said “a simple way to cease the war is the Burmese military to halt their offensive.” Moreover, the last 17 years of cease-fire period is an indicative of the Kachins’ desire to resolve conflict without violence.

The question would be why the Kachins are not working hard to gain their rights by non-violent means? The answer would be who would listen if a Kachin speaks? Who would notice if a Kachin is under house-arrest? Have the international community heard and responded enough to the plight of the over the 80,000 displaced Kachin refugees? The Kachins, as many other ethnic minorities in Burma, are not simply a minority in terms of “fewer in number” as Aung San Suu Kyi implied. They are a minority in a sense, borrowing Gayatri Spivak, who have “limited or no access to the cultural imperialism” in Burma, and thus in the world.  The Kachins have always been the receiving ends of the system without any voice and place in the intellectual and political milieu in Burma.

Aung San Suu Kyi pointed out the need for international or independent observers in order to assess and speak about the situation. Why has she yet straight-forwardly called for such intervention? The international community would surely pay attention to her plead. Instead, many Kachins cannot appreciate her neutral position when she said “fighting is not just one side.”  She should heed to the words of her fellow Nobel Laureate Desmond Tutu who has once said, “If you are neutral in situations of injustice, you have chosen the side of the oppressor. If an elephant has its foot on the tail of a mouse and you say that you are neutral, the mouse will not appreciate your neutrality.” We know who is the elephant and who is the mouse in this conflict.

In the same interview, Suu Kyi said, “I condemn all violence.” However, the sphere of violence encompasses not only our action, but also our thought and our word. Especially violence of word, especially used by an esteemed and powerful person, can be more damaging in a situation such as where unequal power relation is at work. Labeling the powerful Burmese military and the Kachin resistance including civilians as equal contenders does cause a damaging impact on real people and situation in the Kachinland. In this case, violence is done by such marginalizing and indifferent words without any actual act.

I hope rhetoric of “finding out the root, the cause of the conflict” can truly be translated into political action before the agonies and miseries of the Kachins turn into irreversible distrust and hate. A matter of fact, the root cause of the Kachin situation is an obvious one if one is sincere enough to see and care enough to understand.

Excellent piece Jaiwa. At the very least she did make mention of the situation in Kachinland, ever so briefly, at the UK Parliament.

I’ve given her the benefit of the doubt for quite sometime now and it is getting harder and harder to accept her constant dodging the Kachin issue. I would like to think she is still a hostage and that she still has to choose her words or be re-arrested.

With the content of her speeches and interviews sounding more and more as if they were written in Nay Pyi Daw it is hard to ignore the possibility the junta succeeded in brainwashing her, global corporate interests got to her or she simply gave up.

But as of this juncture I do feel betrayed since I expected at the very least that such an iconic democracy figure like Daw Suu would have had more to say about the atrocities being committed by the junta against the Kachin.

Giving her the benefit of the doubt has only given the junta more time to commit murder, destroy property and infrastructure in Kachinland. If Suu Kyi continues this posture of ambivalence with regard to Kachinland then it is only a matter of time before I will consider an enemy of the Jinghpaw people and just another junta stooge. How much longer must we wait for her to do or say something of substance for the crisis in Kachinland?

I hope Suu Kyi realizes she is consorting with people and corporations who’ve continued to violate sanctions from the very begining. Or maybe she does………