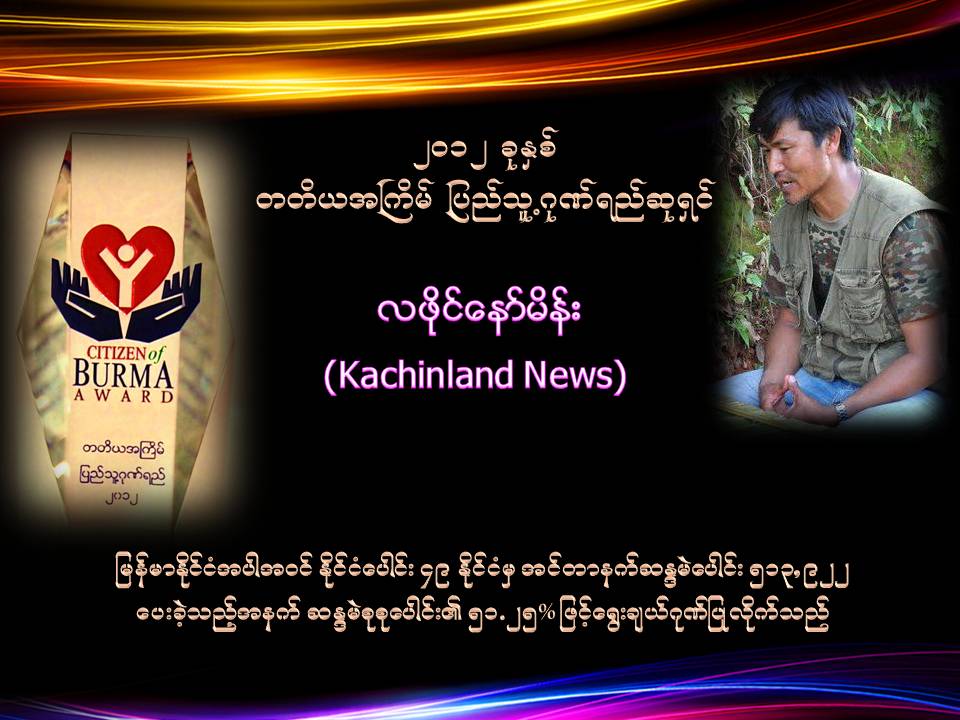 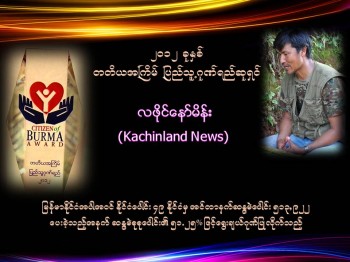 Lahpai Naw Ming, chief reporter of Kachinland News, was awarded the third Pyitu Gon Yee, the Citizen of Burma Award on the 27th of May, 2012. Lahpai Naw Ming received 51.25 percent of votes out of the overall 513,922 and won the Award.

There were 33 individuals nominated for this award and the last 5 were entered into to ballot poll for popular vote.  The past recipients of this award include U Kyaw Tu (2010), and Daw Shu (2011).

The Kachinland News’ staffs proudly recognizes and congratulates their fellow reporter Lahpai Naw Ming on his achievement for this Award. We wish and pray for his quick recovery from current physical injury. We eagerly hope for his swift return to serve his fellow citizens, resuming his gifted and passionate investigative news reporting.

Naw Ming was injured by the heavy artillery shelled by the Burmese military while reporting at the KIA frontline post, Kawngwai, near Loije on Jan 4, 2012.  He is now currently undergoing medical treatment at a hospital in China.

Incident at Naungwo Defile: En Route from Loikaw to Kalaw

Photo: Google Map showing present day Kalaw/Loikaw motor routes  In 1950, while serving as commander of the 1st Emergency Kachin Battalion at Myitkyina, I received orders to take up command of the newly formed 4th Light Infantry Brigade at Kalaw. The War Office had dragged its feet about making official the local rank promotion that Prime […]

Should TNLA/PSLF Be Considered as Perpetual Alliance?

A Distortion of Ethnic Identity

Photo: The 2020/21 prescribed Geography text book for the Seventh Standard U Pan Yee’s Kyunnoke Doh Taingpyi (Our Country) was the school text book on Geography that raised the ire of Kachins far and wide for its demeaning portrayal of the Kachin and Chin as hill tribes people who resort to thievery to escape starvation. […]

Photo: Kachin Leaders with the Frontier Areas Committee of Enquiry (FACE); Maymyo, April 1947. (Illustrated London News) I had the privilege of close personal encounters with Bogyoke Aung San on three separate occasions. All of the meetings were unscheduled but nonetheless significant, as they took place in the crucial pre-independence years of our nation, and provide […]

Liveth there a Judsonian with a soul so dead, Who never to himself hath said, This is my own, my Alma Mater. It was the first morning of the first week of June 1929, the official opening day of the new term at Judson College. Approximately 800 students were gathered at the assembly hall of […]