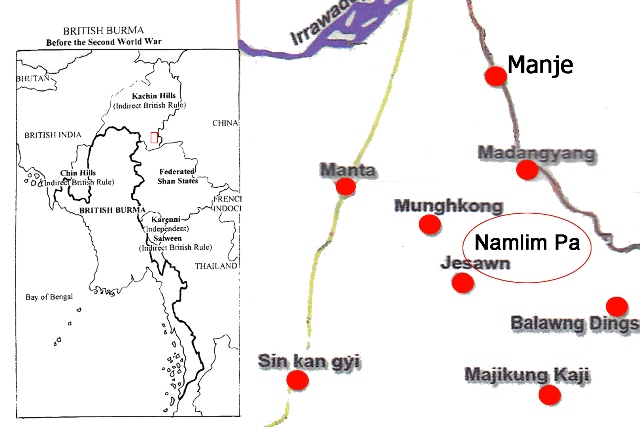 Burmese government soldiers bombarded with heavy artilleries on Namlim Pa village in the province of Manje on the 8th of October, 2011.

The government troops (LIBs 47, 276 & 601) under MOC (21) with 200 soldiers are now present in Manje province, torturing and investigating the civilians. Due to such offensive assault, the villagers from Namli Pa, Ms. Palai Htu Lum and her 2 years old daughter Mai Ra were critically injured. The 3rd grader, Palai Nan Naw (7 years old) was also killed because of the attack.

There was a fierce battle between the KIA soldiers under the 3rh Brigade and Burmese government troop by the Namlim Pa village on the 9th of October, 2011. Consequently, the Burmese government soldiers burned the entire Namli Pa village down without any substantial reason. The villagers who did not escape from the inferno, such as the school teachers and students from RCM boarder, were arrested by the government troop in order to be used as human bomb-shields.

Namlim Pa was a village with about 400 households before it was entirely burned down to the ground.