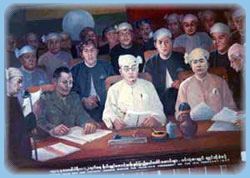 Since 1947, the Panglong Agreement, the foundational document of Burma, has been an unfulfilled promise and unrealized dream. However, it has been a powerful myth that shadows Burmese political atmosphere. Many ethnic resistance groups, including KIA, invoke Panglong and demand the successive governments to fulfill the promise of Panglong. On the other hand, while continually exploiting the political ideology of “union” made possible by this foundational document, the successive dictators have c/overtly denied the validity and implementation of Panglong Agreement. From its beginning, the Panglong Agreement has been an ideological myth that is ambivalently used for political gains, especially to pit against one another between the Burmese majority and ethnic minorities. It is not coincidence that the release of Aung San Suu Kyi, the formation of “peace-committee,” and the reappearance of Aung San’s portraits occurred in the context of recent break-outs between the Burmese military and ethnic resistance groups. By invoking such shreds and patches of Panglong (i.e. Aung San, the architect of Panglong and “Peace Committee” especially formed for ethnic groups) and staging the improvement with NLD party, the Burmese government cunningly undertakes the act of labeling KIA (and other ethnic insurgent groups) as the terrorists or the enemies of the “Union.” As its rationale follows, the arm struggle of the KIA in the context of “political progress” can be obviously seen as jeopardizing menace or unfavorable blockage by both the Burmese majority and international community. In doing so, the Burmese government creates the conception of KIA (and other resisting ethnic groups) as a liability or obstacle on the road to democracy for the majority Burmese citizens.

There are at least two major obstacles on the way of realizing and implementing Panlong Agreement. First, no successive regime  in power in Burmese politics has ever acknowledged the validity of Panglong. Maj. Gen Soe Win, the Burmese Amy’s Kachin State Commander, made it clear of what goes on without saying for over 50 year — “the age of Panglong is over.” How can a contract be implemented if there is lack of accountability from the other party involved?  Second, there is a deeply rooted sense of ethnic and cultural superiority among the majority of Bama (majority Burmese ethnic group) over ethnic minorities.  Dr. Maung Zarni, a native Bama, pointed out that such cultural imperialism is deeply ingrained among the ethnic majority Bama, manifesting in terms of both “official strain and societal disease.” Such cultural imperialism is not merely “a perception from the minorities” (quoted from the interview with Francis Wade). How can federal system of government that must be exercised under the condition of ethnic equality (the condition also explained by Aung San in plain language as “Kachin da kyat, Bama da kyat”), be materialized in the country dominated by racial and cultural imperialists?

The Panglong Agreement has been so far merely a political ruse of Aung San, a sheer naivety of then ethnic leaders, or a wishful thinking of the ethnic resistance groups. The effort of invoking Panglong for equality and rights of the ethnic minorities has been over a half-century. The Burmese military government has declared that “the age of Panglong is over.” It does not make sense anymore to talk about Panlong Agreement with the existing Burmese government who has nullified it from day one. There are very few alternatives left for the KIA and ethnic resistance groups. It may now be time to call it a loss to Panglong. If “the glove does not fit, one must acquit it.”  If KIA cannot invoke Panglong, they must revoke it, rather than being played or bogged down by it. If they cannot go forward with Panglong, they must go backward to the pre-Panglong age — the age of autonomy and sovereignty of the Kachins.